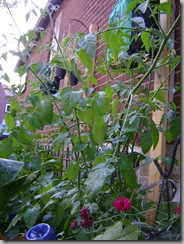 So the side-door “Sweet 100” tomato (yes, I bought a non-heirloom commercial hybrid seedling, I know; shameful)  was getting entirely out of hand.  In fact, all the tomatoes were growing a bit wild, so I declared this a Weeding and Pinching Day.

Attacked a bunch of weeds around the back, on the neighbour’s property (because it adjoins ours and his weeds make my garden ugly and sick sometimes – the weed maples spread powdery mildew all over last year).

And then it was Pinching Time!

First, a word of caution:  Tomatoes can be either determinate or indeterminate.  Determinate tomatoes are the well-behaved kind:  they grow to a certain size, make their fruit, and eventually shrivel up and die.  NEVER PINCH DETERMINATE TOMATOES.  They only have so much “growing” in them – it doesn’t make sense to cut off any of it.

Indeterminate tomatoes are the vining flopping spreading type:  they’ll grow and grow and grow forever, if you let them, or until frost kills them.

(what do they do in Israel or places where there’s no frost?)

Trouble is (and this is all from what I’ve read, though there is some controversy on this issue), they basically have enough energy to make tons of leaves or to make yummy, succulent fruit.  Dunno about you, but I’d rather have fruit.  To improve the quality of the fruit, as well as to improve the shape of the plant, you have to selectively control its growth.

The best way to do that is by doing what I think of privately in my head (and have never revealed to anyone before) as “shaving the armpits.”

See, indeterminate tomatoes are awful for producing SUCKERS where leaves branch out.  At the junction (“armpit”) of a leaf and the main stem, at a 45-degree angle, a small two-leaved sucker will start to grow (this one was on the hanging “Chocolate Stripes” tomato): 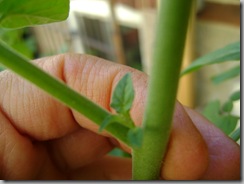 Left unchecked, the sucker quickly (within days!) can turn into an entire miniature tomato plant, like this one that I found today, hanging off old “Sweet 100”: 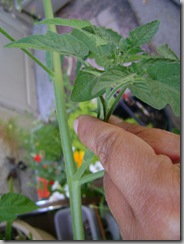 See?  It’s even getting ready to flower! 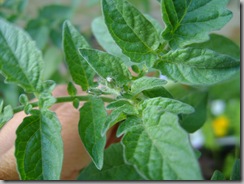 The hard part here is getting past the idea that if the sucker makes fruit, you will have MORE fruit.  That’s actually where part of the controversy comes in.  Some people say to just leave the suckers and you’ll have more fruit, and everybody will be happy.

But.  I don’t believe that.  I believe you’ll have a ton of puny, underripe fruit, unless you control the plant’s growth a little bit so it can put more energy into the fruit that’s already growing.

So you have to be harsh.  You have to snap off that sucker.  And you will actually find that it’s a pretty easy thing.

1)  Bend the sucker carefully away from the main stem.  The most important thing here is to not snap the main stem, but it should be sturdy enough by now. 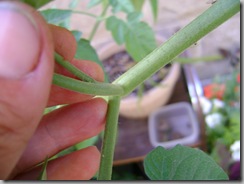 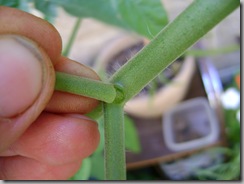 3)  Snap!  You’re done!  A clean break is best, without tearing a strip off the stem, which could invite bugs and disease. 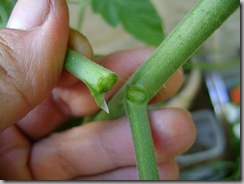 Look at that little plant there! 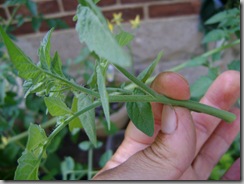 You could probably stick this into the soil and it would grow into a whole new plant.  Tomatoes are pretty sturdy that way.  I just composted this one (okay, I just chucked it into a flower bed… ).

In the case of this side-door Sweet 100, there was also a ton of leafy growth that I was worried was too congested around the lower stems, which could lead to disease later on in the season when stress and drought set in (even with the Plant Nanny installed in the planter, which will probably help a bit).

Once a tomato plant is well-established, you probably won’t hurt it much by snapping off a few of the lower leaves.  I find these usually get bug-eaten and maybe a bit shrivelled anyway.  As long as there’s enough leafy green up on top to keep the whole unit going, you should be fine.

Maybe even healthier, because as I said before, a plant with too little air circulation to the main stem – even if it’s because it’s covered in happy, healthy leaves – is a plant that is begging for attack by fungal and other diseases.

After taking care of “Sweet 100,” I also cleaned up the tomatoes in self-watering containers, because they, too,  were starting to sucker like crazy.  Hopefully, this plus some warm weather will help us see some yummy, red, ripe tomatoes someday soon!!!

By the way, wash your hands well after handling tomatoes.  I do snap them with bare hands because I’ve found that when I wear gloves, I can’t be as precise and that’s when I either hurt the main stem or tear off an “extra” strip along with the sucker (open wounds can also lead to disease).

Remember that those suckers are poisonous (literally).  Some people are more sensitive to tomato foliage and cannot handle them with bare hands.  If you are ever mysteriously itchy after coming in from the garden, it could be because you’ve been handling tomato foliage.