How to save seeds from annual poppies:

I love annual poppies!  Not so much the perennial papavers, which tend to be hairy and take up a ton of space in the garden.  The blooms are bigger, but don’t last very long and then they’re just big NOTHING gaps in the garden for the rest of the summer.  And the perennial ones tend to be that orange colour, though we did see some lovely white ones this year.

Last year, I grew papaver somniferum, ruffled frilly peony poppies (aka breadseed aka opium poppies), in the most delicious salmon and pink shades (and I do NOT generally love pink!).  See them here!

We even got to eat some of the seeds.  But then, thanks to a mix-up and somebody thinking the seeds were left over from a challah, they were almost all thrown away, so I didn’t have any of them to wintersow this year, despite last year’s success.

The only poppies I have growing now are in the side-door planters, and I didn’t love them that much… but they did form the traditional poppy seed-head, which is, as the title suggests, nature’s most perfect seed-saving instrument. 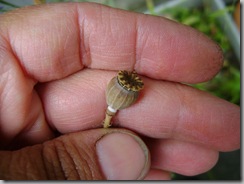 The petals drop off, the pod starts to dry, and only at the moment when the pod is completely dry and the seeds are completely ready do the little “pod bay doors” open, turning the whole seed-head into a little salt-shaker, only for poppy seeds.

I’ve blown up the picture of the openings up a bit so you can see them clearly; they’re the exact size of a poppy seed.  Waved at the tip of a poppy stem, you couldn’t design a better instrument for scattering poppy seeds within quite a nice radius. 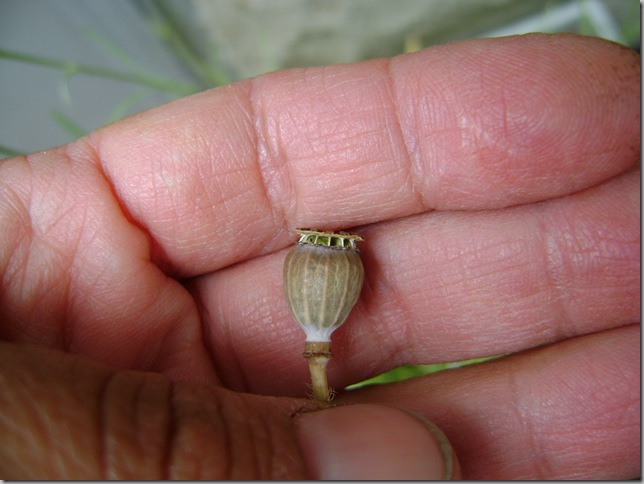 Naturally, this makes these the easiest of all seeds to save for next year.  Instead of letting the stem wave the seeds every which way, snip it gently and invert it over a clean, white envelope.  You don’t have to be too gentle:  unlike many seedheads, these are not at all brittle and, in fact, the larger ones are quite nice in crafts and dried arrangements.

Then, write “poppy seeds” on the envelope, add details of the colour, year, etc., and then seal it up.   I guess you could do something fancy with baggies and/or the freezer, though I’ve heard mixed things about that because there’s a lot of moisture floating around in a freezer.

Do write the name on the envelope as soon as possible.  That’s my big mistake.  I did this with tomato seeds last summer, too.  I’m always sure I’ll remember because it’s so exciting to save seeds and think about new things growing next spring… but then something happens, I’m called away, and come back to an anonymous white envelope full of ??? seeds.  Many seeds look alike.

Columbine (aquilegia) seeds, in particular, look a lot like poppy seeds.  (Which reminds me that I left an envelope of columbine seeds sitting in the backyard just now.  Excuse me for one second!)  And without contradicting what I said a few minutes ago, the dried columbine seedhead is perhaps nature’s second-most effective seed saving instrument.

Columbines miss top place only because the openings are a bit big and if you come late, the seeds will have already scattered themselves.  Poppies give you a bit more of a “window”.  You do  have to handle columbine seedheads carefully; if you shake them about or tip them prematurely, all your seeds spill out and are lost.

Plain old white envelopes work just fine for me, at least for a single season – ie from this summer to wintersow this coming winter, or sow normally next spring.   If you plan on saving seeds for more than one season, you’ll want a fancier system, I guess, but don’t overburden yourself by making it complicated.  Plain envelopes do just fine most of the time. 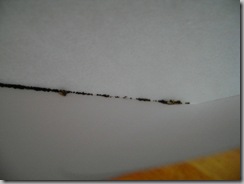 And here are your seeds!  These ones are black, but many of the peony poppy seeds I collected last year were shades of red, brown and pink: 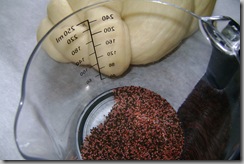