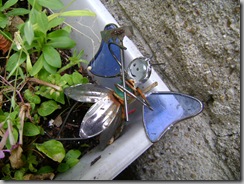 Low, low, low would be the accidental tree-branch falling on one of the hanging side-door Ikea planters, breaking the hanger it was hanging from, toppling the whole thing upside-down, and de-spiking one of my ooltra-tacké Garden Fairies.  (it’s the Rake Fairy)

The good news is that these were my “indestructible”, “bullet-proof” planters made up of the only plants I could find (creeping Jenny and ribbon grass) that could withstand conditions in these terribly small, impractical pots. 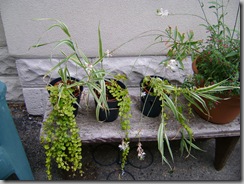 There they are on the bench right now, and you can see that while one looks a little flattened, the other two have taken their licking and kept right on ticking, not much the worse for wear.

And the HIGH more than makes up for it:  my seemingly ever-bearing raspberries!  And I do mean ever!

I thought, based on the last two years, that they’d produce a single crop in early summer and another in fall, but it turns out my old wise friend Emily (and I mean old in the sense of she’s been in my life forever, and wise in the sense that she’s always known way more than me) (and she’s an English teacher who would undoubtedly want a comma in this sentence somewhere, so here it is).  Was right. 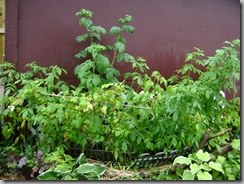 Mine, like hers, seem ready – now that they’ve reached maturity – to bear continuously on old vines from July until fall.  The new vines are just hanging around not really making fruit yet.  Now I don’t know whether they will produce any this year or wait ‘till spring.

Every day, we get about a handful of raspberries, which I share with the kids, so it’s not a ton, and Gavriel Zev always screams when we’re finished and tries to pick the unripe ones. 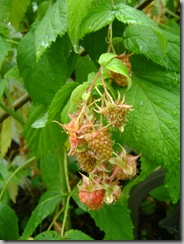 But it’s really, really nice having a reason to go back there every single day, despite the aphids and the sad, sad state of my sun-deprived, nutrient-deprived SFG beds.