Food Rave: One Old, One New 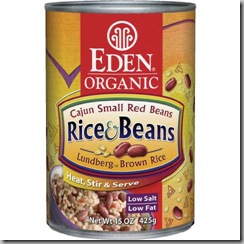 My favourite is Cajun Small Red Beans, but they’re all quite tasty.  I find they need salt; I add a bit now before heating it up because I know it’ll need it.  Lovely with cheese melted on top, or all by itself!

And at the total opposite end of the healthiness spectrum, there are these new alcohol-free “mocktails” from President’s Choice, which I picked up for our family BBQ the other day. 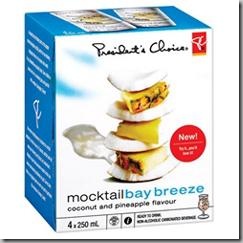 To be very, very honest, they are basically soda pop for grownups.  A bit less sticky-sweet-tasting than soda; a bit more sophisticated.  I only tried the “bay breeze” flavour, which shows pineapples and coconut on the box but turns out to actually look a bit pink, and it certainly hit the spot of wanting a pina colada type beverage.

Being even more honest:  I added a bit of rum to mine, which made it quite perfect!  I just felt it needed something to attain that level of sophistication which (ahem) a sophisticated consumer such as myself deserves.

(Just a bit:  I swear!  I was driving afterwards, so it was literally a splash.)

So, yes, they’re booze-free.  But they really are improved by booze.  But it did save all the trouble of mixing up pina coladas from scratch, plus it was fizzy, which makes it a nice, light drinkie.  Mmmm… must buy more!

Other flavours include Raspberry Martini, Lime Margarita and Minty-Lime Mojito (didn’t see that one at Fortino’s).  I bought the Raspberry Martini one, but Ted thought that would be more of a vodka drink than a rum one, and we had no vodka, so haven’t tried it out.

I love it when yummy, interesting new things are kosher.  Makes me feel like things are totally going my way!  There’s even this gorgeous kosher symbol on the PC website!   Shkoyach, President!