In an attempt to build family togetherness, my desire to spend a day at the waterplay area of the zoo thwarted by rather cool, dank weather, I took all the kiddies to the beach!

We have kind of a system:  I put one big kid in charge of drinks, snacks, etc., while the other is more or less responsible for getting the little ones out of the house and into the car.   Each big kid is responsible for their own sun hat… ha.  That one is like pulling teeth.

It was almost pointless to put sunscreen on everybody, because the day was so dismal, but it actually worked out well because Naomi Rivka whined so much that the big kids couldn’t take any more and just put theirs on cheerfully.

So here we are on the beach: 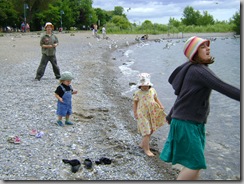 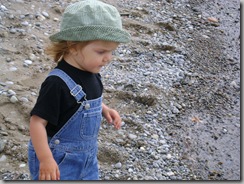 After a while of bird-watching, stone-sorting, stone-flinging, inukshuk-building and more thrilling waterside fun, we took off for the amazing, fenced-in playground at Kew Beach.

I don’t usually say much about playgrounds, for the same reason that spit has no taste:  we spend so much time in them, I barely notice them.  But I love discovering new, exciting playgrounds, like the one at High Park, or this one.

Apparently, we went here twice last summer, but I guess, with a 6-month-old baby, it was all a bit of a blur.  Also, there is a large wading-pool area where we spent most of our time the first time we went last year… and that, because of the strike, is not an option at the moment.

I love this huge, all-ages climbing “castle” right in the middle!  Reasonably accessible, it has various ways of getting up that are a challenge for a wide range of abilities!  Gavriel Zev even eventually found his way to the top.

Plus, there are the same amazing tunnels underneath the structure that we enjoyed at the play castle in High Park.  What would ordinarily be waste space or big, boring gaps, are these amazing, secretive hidey-holes and dead ends that (I believe) let kids use the space in really imaginative ways. 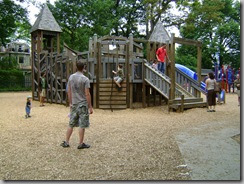 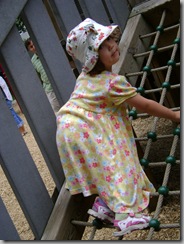 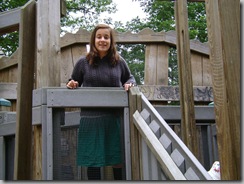 Plus, we found this amazing, entire-family seesaw!!!  Instead of just one seat, there’s a bench on each side that can hold two or three people, plus a big square platform in the middle, in case you have more than six in your family! 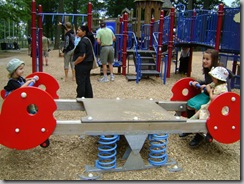 Everything about this playground is built with a huge number of kids in mind.  Instead of just a single little playhouse a kid can climb into, there are a few in a row:  maybe three or four?  There are also three little “canoe” boats, a few swings, and two more-conventional all-metal climbing structures structures in addition to the main wooden “castle”.

Maybe we’d get sick of it if we lived next door, but we definitely all left wanting to check it out again soon.

Oh, except YM, who wandered off while we were still on the beach.  We looked everywhere for him before leaving.  I figured he knew where the car was, knew where the playground was and, if all else failed, could find his own way home.  But we really DID look around for him, despite Elisheva’s insisting that I was abandoning him.

After having been back to the car twice to look for us (see?  he knew where the car was!).

Angry, too:  “Where did you go?!  I was right there!”  He insisted he was “right on the bench, where I said I’d be.”  But I purposely checked that bench before we left; I walked past it.  He wasn’t there.  And even if he was (which he wasn’t!), wouldn’t he have noticed four of us walking past him? 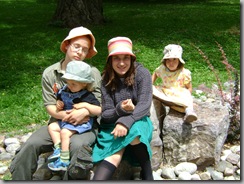 Me, two running-around girls, a running-around shrieking baby, a heavy thumping stroller on the boardwalk; we’re not exactly subtle when we leave or arrive somewhere.

So anyway.  All’s well that ends well, and here’s everybody, utterly content after their early afternoon of adventure, back at the car at the end of the outing!