I know some people love making challah because it’s  hands-on.  I love it because I’m a bread snob and cannot stand anything but the freshest possible bread, period.

I also know that if you make bread by hand the right way, you won’t get much stuck to your fingers because the dough will be perfect and almost self-cleaning in its magical stick-togetheriness.

But I use a food processor:  I love it.  Sue me.  It’s a 14-cup Cuisinart, and my only sadness about it is that it cannot make a huge enough batch of bread to make a bracha; I have been making two batches and combining them, but was recently told I probably need to make three to make a bracha.  (If you don’t know what the heck a bracha is, skip the preceding.)

Anyway, so I am a hands-off challah baker, most of the time.  I love forming the loaves, but don’t really care about getting down and dirty for the first bits.  So I mix it in the food processor, and then transfer it to a large, no-zip freezer bag, using this miraculous “no-touch” method: 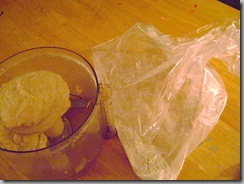 2) Cinch the neck of the bag, trapping air inside, so it looks a bit like a balloon (don’t blow in, because that will add moisture and also because even you probably don’t want to eat challah that marinated in your own “breath moisture”)

3) Now shake, shake, shake.  The flour will magically redistribute itself to pretty evenly coat the inside of the bag.  You’ll still have a clump of flour in the corner of the bag; that’s okay.  It comes in handy when you remove the dough later and need extra flour to help coat your work surface. 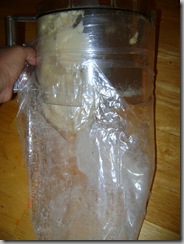 4) Fit the bag tightly over the mouth of the food processor and tip the whole thing upside-down.  Dough should come out slowly but in one piece, knife and all.  Remove the knife (food processor blade).  :-) 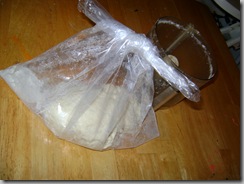 6) When dough is finished its first rise, tip it out of the bag onto your work surface (ie table or counter).  It should come out cleanly because of the even thin coating of flour.  Spread the “spare” flour to coat the work surface and/or your hands to prevent the dough from sticking.

7) Don’t knead!  It’s a myth that dough needs a second kneading.  You really don’t want to lose all those fabulous bubbles that you’ve just created (according to my kitchen guru and uber-balabusta Alton Brown, at least).  Just press the dough down a couple of times and it’s ready to start shaping.

8) Shape the dough into whatever you want – braids, crown, a loaf pan, whatever.  Oh, but first, separate an “olive-sized” piece as challah, but without a bracha, unless you’ve made a very large batch.  Place on parchment paper on a baking pan.

9) Here’s the cool part where you get to be ecological and reuse that plastic!  Carefully slice open two sides of the freezer bag.  Spray the finished challah(s) with cooking spray and then lay the now-flat piece of plastic (formerly a freezer bag), flour-side-down on top of the finished loaves.  Leave it somewhere to rise for a while but not too long.  If you leave it too long, it gets all ugly and droopy like a cane toad.  Bad.

10)  Bake for half an hour at 350 degrees.  Or whatever your recipe calls for.  Remove the plastic bag first… and unless you can think of another use for it, throw it away.  But reuse your parchment paper!  I use mine quite a few times, if I can, but throw it away if it’s too eggy or burnty-looking, because then it might transfer a spoiled taste to your food.  And I have never figured out if it can go in the city compost… which is somewhat moot right now because of the strike.

Point of trivia:  I have read that you’re not supposed to deal with challah or bread-making of any kind the day before you go to the mikveh.  Too great a chance that it will get stuck under your fingernails, etc.  If you have no idea what a mikveh is, forget I said anything!