Gosh, it’s hard to come up with catchy titles.

Thought I’d do a garden update, because it’s been a while and we’re having a rainy day, so I can’t actually BE in the garden.  So I’ll start with “things that are hanging” of various kinds. 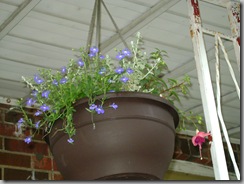 I liked the Home Depot self-watering hanging planter that I have in the front (at left, with lobelia, helichrysum, fuchsia) so much that I bought two more.  It’s a good idea; my main complaint is that the reservoir seems to empty extremely fast.

Still, I’m attempting to grow cucumbers in one and tomatoes in the other.  I know, I know.  TWO tomato plants in a single planter of this size is insanity.  One is a small “Tiny Tim” or something, but the other is more full-sized.  I may dig it out and replant it somewhere more suitable. 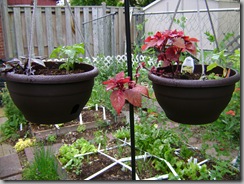 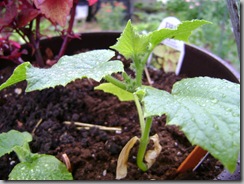 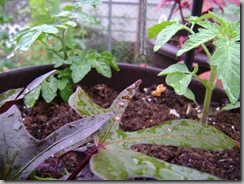 Each planter also has a decorative “annual” – cucumbers with trailing coleus and tomatoes with purple sweet potato vine.  Much too much plant in one planter, okay.  Chalk it up to a beginner’s mistake; I’m sure I will regret it.

And here, also in the backyard, are my “cheap” hanging planters on the goth chandelier from Value Village ($19.99, but I like it a lot).  Each has nasturtium growing from seed, along with some helichrysum I divided and stuck in.  And there’s my Mother’s Day windchime present from Ted & the kids! 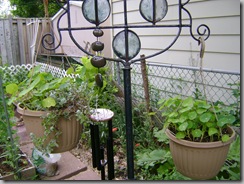 Garage bed, with the addition of a new hanging coleus basket: 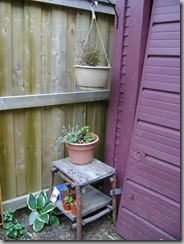 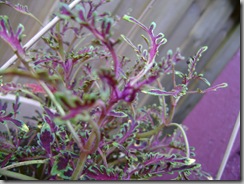 And now, down the driveway to the… 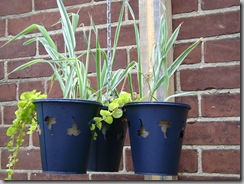 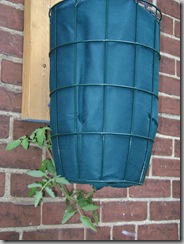 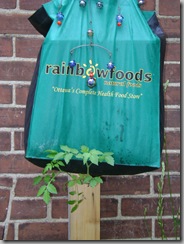 And last, the hanging potatoes in grocery bags!  Thriving on the left, and kind of chugging along on the right.  I mounded up the two “straggling” potatoes (one in a bag, one in a bin) with city compost last week… hopefully they’ll put on a bit more growth.  The left one actually looks like it might flower soon. 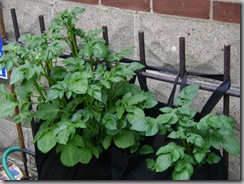 (like when this rain ends and the sun decides to come out!)

More garden stuff coming, including an update on the CORN in the square-foot beds!