I had forgotten this from last year:  for some reason, the exciting part of wintersowing is the sowing, not so much the sprouting.

I think I know why, too… because when you sow the world is white and grey and cold and you’re sowing dreams of green and warmth.

But when they finally come up, in April / May, well, everything around you is green and warm, and the sprouting is, sad to say, just a bit anticlimactic.

Just more green stuff to find a home for, you say, with a shrug.

Still, in the spirit of February, here are some of the more exciting results from my wintersown garden: 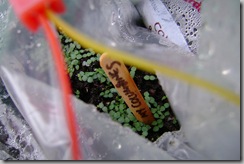 Columbines harvested from my own plants – about a bazillion of them!  The seed I “stole” from the gardens at Casa Loma has not performed nearly as well so far as my own seed has.

Growing along very happily in nothing more than a large ziploc baggie. 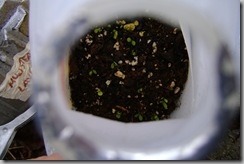 Liatris – hopfully white, to make up for the expensive ones from Vesey’s that I am now very certain Naomi and I planted upside-down last week.  Growing in a cut-in-half and taped-together large-size plastic white vinegar bottle. 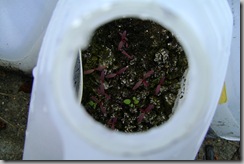 Amaranthus (Velvet Curtains)!  Tried hard to grow these last year and they turned out shrimpy and undersized in my underfed front bed.  I can see a couple of weeds in here, but so far, so good. 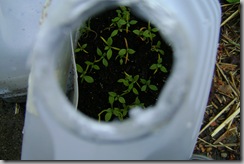 Poppies (Black Peony).  I loved my shades-of-pink peony poppies so much last year (even though one got stolen!), but wanted to try them in a less-tacky colour.  These are papaver somniferum, or breadseed poppy, an annual better known as (gasp) the opium poppy. 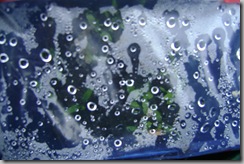 Parsley.  I already have lots of parsley, but this was an experiment, since we can never get enough parsley.  Because it sprouted so well by wintersowing, that means (hopefully) I won’t have to waste time, energy or space on growing it indoors in future.  Great success!

Maybe I’ll take spares to the swap, or pot a few up to build Freecycle karma and hopefully get some good plants back in return 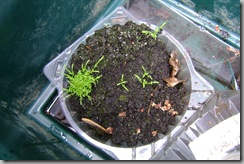 Chamomile:  I said a month or so ago that something was growing in the chamomile pot (actually a reused container from hydroponic lettuce), but that it couldn’t possibly be chamomile.  I was suspicious because it was only growing directly beneath a vent-hole, so I figured it had to be a weed.  Apparently not… this looks like a pretty vigourous, healthy plant to me, and thus – however unglamourously; I mean, chamomile??? - emerges as the winner of the “First Up” award in my wintersown garden!