Petunias problem (not a kvetch yet) 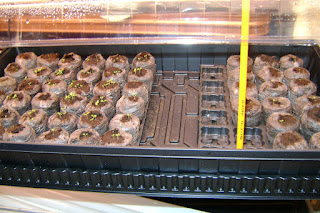 This one hasn't reached the formal "grounds for an email" stage yet, but might be there in a few days...

Most of the petunias are up now. See any difference between the left and right sides in this tray?
Like one side is growing and green and the other just has a few specks here and there? Yeah, I noticed that, too.

The ones on the right were an impulsive eBay purchase; the ones on the left were freebie SASE seeds labelled "Petunias for 2007" (ie at least two years past their prime).

First of all, I may have seeded the left side a bit more heavily - my goal was basically getting rid of the seeds since they were pretty much expired. So I maybe planted 3-5 seeds per puck instead of 2-3 of the rare, expensive impulse-purchase eBay seeds.

But anyway, compare for yourself: here are a couple of close-ups: 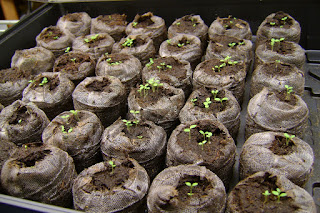 Left side, doing great... 2-5 plants per puck, pretty much without exception, making a germination rate of maybe 80-90%. This is all so scientific, isn't it? Now the right side, where there is maybe one, maybe TWO frail little seedlings poking up in the middle of each puck. I'd say that looks like a germination rate of 20-30%.

Sigh... I will give them a few more days, in case this is just due to differences in germination time (but I doubt it, because as you can see, some have germinated). And then, I will be forced to...

I was so looking forward to special white petunias this year that would smell lovely but not be so clashy with all the reds and other bold colours in my garden.

Was going to be bulgur - Roasted Wheat and Celery Au Gratin from Small Planet only with broccoli instead of celery.

BUT Ted pointed out that we have three tinfoil containers of chicken wings in the freezer downstairs, so I will heat those up instead, and serve them with some of the leftover tu b'shvat foot (chicken, rice). Plus make some fresh plain rice because Naomi and Gavriel Zev like it so much.

Naomi has swimming today, and that seems to be our swimming-lesson tradition: swim, come home, eat rice.

So that's today. And petunias.
That's the news in petunias and supper for today.