I wrote this a long, long time ago... that's why YM is six. It has never really seen the light of day... but it seems appropriate enough today after a quick edit to remove some of the more embarrassingly flowery bits.

"This little light of mine... I'm gonna let it shine..."
We had better be singing that one for her nice and loud at the funeral next Monday.

We couldn't really afford a nanny. In the suburb where I grew up, the word spoke of wealth beyond imagination. She wasn't really our nanny at all. Originally hired by my mother's family, Nanny never did have children of her own. We always knew we came first; that she'd never replace us, even after she moved on to care for other children.
One day, years ago now, Nanny went to her doctor after a few small strokes which had left her disoriented. She told us, so sadly, "He said I couldn't look after babies anymore." Her babies were her life: me, my sisters and brother, rocked by the same arms that had cradled our mother when she was small.
The greatest thing about her was that she'd met Christopher Robin's nanny over in England. "Was he really a real boy?" we'd ask, as my children now ask me. "Of course he was," I say. "Nanny knew his nanny." It was all real in my dreams, and when I finally grew up and visited London’s Hundred Acre Woods, Nanny’s stories conjured for me the young Christopher Robin with all his friends. 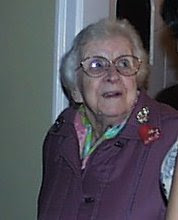 Nanny brought the calm that settled in the house when my sisters were born. She would stay in the nursery, making it a nest of joy and peace. As I’d tiptoe in, late at night, there Nanny would be, holding the newest of her babies in the rocking chair. Heaven will be like that: that room, that rocking chair, Nanny’s powdery baby-smell and the half-light that glowed through the night.
Later, my sisters grew up. They sprouted dreadlocks and piercings and the kind of friends that could frighten old people. Nanny's not like that. She can turn to anybody on the bus and strike up a conversation. She’ll ask kids with spiked hair or shaved heads what the style meant. "Is that so?" she'd ask. "Really," or even "for crying in the sink" – an amazed and wondering tone. Nothing could shock her, and even now, when she hugs my sisters, she still wraps them in that nursery glow.
Six years ago, when my own son was tiny, he was grumpy at our family's Chanukah party. "Here," said my mother, who couldn’t calm him. "Go to your Nanny," she said, settling him into Nanny’s soft, soft arms. My son looked up at her and instantly stopped crying, as if to say, I'm right here, where I want to be. 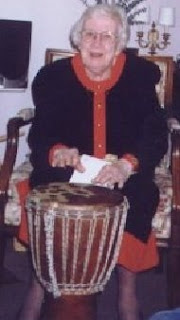 As a kid, I used to brag that I had five grandparents, but I never told Nanny. Now, years after the other four are gone, we stand in the elevator of her building and she nods to a neighbour: "my grandchildren." I smile; the technicalities don't matter anymore. We have earned the right to call each other family.
Nanny's religion always fascinated me. A woman of deep faith, she's spent years overseeing our family's Bar Mitzvahs, Rosh Hashanas, even the shiva meals after our funerals. She never challenges or questions our rituals; just accepts with love the ways we’re different.
One year, when my mother was taking out the Passover dishes, Nanny asked if she should polish the holy tray. "What holy tray?" my mother asked. It turned out she meant an ornate silver tray my mother always used at the Seder meal. The tray was indeed engraved, but not, as Nanny assumed, with prayers and blessings for the holiday. The engravings were cocktail recipes: Manhattans, martinis, gimlets, Bloody Marys. It was saved for Passover only for its functional value: the formidable shape, size and glitter appropriate for the occasion.
That’s what you need to know about Nanny. She looks past the superficial details which are, in the end, only on the surface. What she sees when we all come together at Passover, crowding her in around our Seder table, is holiness: a family forged not by birth, but by choice.
She's our nanny, not because of a paycheque, but because she's chosen us, all of us -- from the sixty-year-old down to the five-year-old -- to be her family. The word “nanny” does indeed bear the powdery scent of riches beyond imagining… the kind that accumulates in a lifetime of love.