And now, from the Bad-Mama Dept... 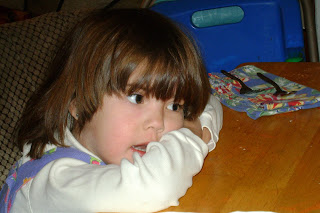 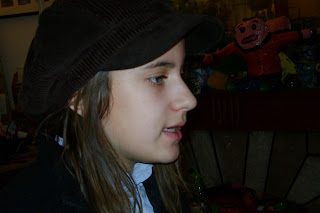 I have been scoffing at the "dangers of the Internet" forces in the frum community because we have only one computer and it's very centrally located in our tiny house, so I figured nobody could access anything without our knowing.

Until last night when I discovered that somebody had used my YouTube account to download not only fifty Hannah Montana video clips, but also a whole bunch of pretty nasty "hot teens" videos. :-o
And no, it was not Ted. It was a teenager who had some sort of crazy story that I will not share here, but who claimed to be as innocent as the driven snow.

Oh - I also never realized that YouTube has a "history" feature. Oops. I guess I have nothing to hide, but still: good to know. 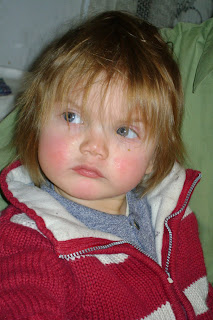 Gavriel Zev swallowed a Chanukah sticker today in the car, at least, I think that's what happened.

When I buckled the kids in, I gave them stickers from a roll my mother gave me - little shiny metallic ones. Then, from the front seat, I passed back a pair of rice cakes. Well, next thing I looked back, GZ's sticker had vanished and he was choking. At first, it looked like he couldn't breathe, but then it was more like gagging, like he couldn't swallow.

I unbuckled and reached back to see if I could remove whatever it was from his mouth, but I couldn't find anything in there. He spit up a bunch of the rice cake and started crying and choking a bit more, but then I guess he swallowed whatever it was that was bothering him and in a couple of minutes was perfectly normal.

Ted, of course, said "I never give him stickers." I rarely give him stickers, and only when he's closely supervised. But I also occasionally let him have grocery-store stickers in the car, because they're made of paper and I figure they'd dissolve easily enough if they get swallowed (they fall apart easily enough when you pull them off your groceries).

I was just so distracted with rushing around today... we had rushed to the library because they're going to be closed for four days, so this was our last chance to pick up books before Shabbos. And then we were in a hurry to get Ted to work (he was 10 minutes late).

Must go make dough for the bagels now.