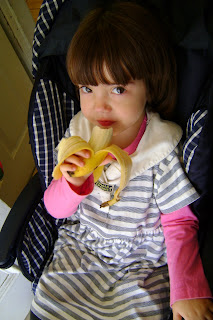 OK, I think I am a magnet. I think they FIND me.
But this one really is the carriage to end all carriages: lovely late-model Peg Perego pliko in a delightful, CLEAN, navy-check fabric. Well, okay, it was soaking wet and disgusting when I found it after two days of rain and snow... but a quick wash of the fabric was enough to take care of that. And, yes, it's missing the front bar. Oh, well. (though I wonder if Peg Perego could supply a replacement at a reasonable cost, because it's nice for the baby to be able to lean forward)

I really, really wonder what's on people's minds when they abandon a carriage like this. OK, I guess technically it's a stroller.

One reason this find is such a relief is that the MacLaren is on its last legs. Wheels, actually; the two rear wheels are almost completely worn down. Which is fine, given that I found it by the curb a number of months ago - no idea when! - and that it replaced the older-model Pliko (sherpa) we were given free when the Zooper was stolen.

These have been our "secondary", in-car carriages since the baby (and Naomi Rivka before him) got too big for the Snap n' Go type carseat carrier. But secondary that they are, they end up seeing a LOT of use what with trips to Riverdale Farm. They are also often our TTC carriages of choice because they are compact and less of a nuisance than a full-size on escalators, in stores, etc. 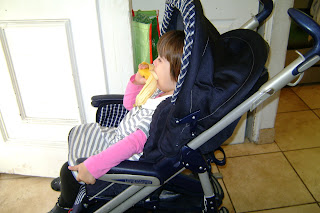 And there are none that I'd rather have than a Peg Perego or MacLaren. Well, okay, if I found a Bugaboo, Uppababy, Firstwheels, etc., I probably wouldn't complain... but I don't think it's likely I'll see one of those anytime soon, with resale values so high.

Still - I looked on Craigslist last night and this Pliko would probably sell for $75-100. And once again, I really wonder what's on people's minds when they just leave it at the curb. Freecycling, I understand - if you really feel you've gotten your money's worth out of a baby item and you can't be bothered selling it, for sure, give it away. But leaving it at the curb means it's going to get rained on and yucky and you just have to hope somebody finds it who can get some use out of it... and won't just clean it up and resell it, although I guess someone could do that on Freecycle as well.

Anyway, I'm happy.
Also got handed down a bunch of beautiful 3-year-old boy outfits; frum stuff, nice quality. And a ton of shoes for him to wear someday as well. Which made up for a rather poopy trip to Value Village yesterday, in which my entire goal was turtlenecks (for me, Naomi Rivka and Gavriel Zev) and I ended up finding a grand total of ONE... and no dress shirts for YM, which is what he urgently needs. Ugh.

Oh, but my uncle is in the hospital... he flew in from BC last week to see (aka Say Goodbye) to my father, but now he's having neurological problems and isn't in any condition to fly back, so he's at the Western. I thought they could have at least stuck him in St Mike's so he could see my father, but my mother says in an ambulance you have no choice.

So I guess I'm not too happy, if that makes sense.

Those are their names... tehillim are welcome.