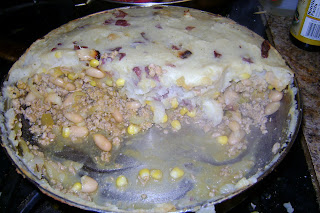 I have been making wonderful suppers, but keep forgetting to take pictures and / or to post here, so here, to make up for it, is last night's wonderful supper...OK, it doesn't look so wonderful. First, in the pan and then, on the plate.

Tuesday Supper:
Shepherd's Pie - turkey / apple / squash (I toss in a jar of babyfood squash)... I also added a tin of white kidney beans to "stretch" the meat and make it more fibrous and filling. The topping is organic red potatoes, mashed with the skins and with roasted garlic because with the skins is my new favourite way to do it. And, of course, now that I'm so hyper-aware of potato issues, the only way I will eat the skin is if it's organic. Though thinking about the range of potato products that we buy ready-made (like instant mash 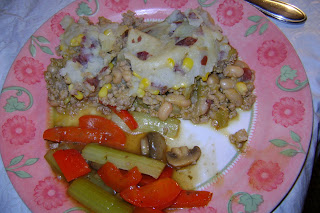 Wednesday
BBQ wings (yes, this week's theme is meat, meat, MEAT!)
Rice
Hmm... something with broccoli, haven't quite decided how to stretch a single head just yet...