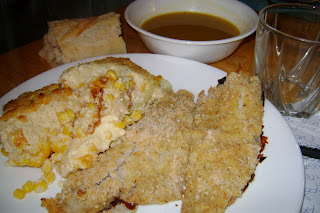 Thursday:
Squash soup (based on Monday's, but much, much better - less stringy and richer with the addition of a jar of babyfood squash!)
Fish (breaded and baked, some whitish kind)
Corn puff - basically an eggish puff with lots of corn in it...
Ace Bakery Bread

I waited 'till after aerobics and I was starving before digging in. Stuck with one piece of bread and butter and really felt like I'd earned it!

Bleary Boddy Battles
(ok, I know it's a typo, but I like the way it looks somehow)

I feel like I am fighting my body one slow battle at a time... belly button first and then I can worry about other things.
Teeth, maybe, since I have a couple of wisdom teeth that need to come out. Or - let's be really gross here - stress incontinence (which has gotten a bit better anyway).
Right now, when I feel a sneeze coming, I stand very, very still and cross my legs tight. Because I know one of several things could happen.
~ I could bite my tongue - and I mean chomp. Like, not being able to taste food on that side of it for a week. My tongue seems to get in the way more now than it used to, but it could be because of all my dental work lately and the unfamiliar proportions and alignment of things in my mouth. Is that a real thing?
~ I could pee. There it is, the super-gross one. It really is better - I've been practicing. But it's not 100%. Will it ever be? Who knows...
~ My belly button could explode. That's what it feels like - literal evisceration. Even if my belly button starts out perfectly tucked-in, neat and tidy, it could fling itself through my abdominal wall at any moment. I have literally gone from standing in the shower admiring how well it's behaving, to bent over in belly pain in five seconds, over the course of a single sneeze. (I suspect I sneeze more in the shower - in the bathroom in general - due to mold / mildew, and am working hard to stop its spread with a merciless campaign of opening the window after every shower and wiping down the tiles and walls as well).

These three choices, of course, are not even counting the normal options, like snot coming out your nose, or spraying the people or objects around you with saliva. Or both! Or any combination... because honestly, I never know whether I'm going to get none of the Big Three options, or one, or two, or even all three. It has happened before.

But now, with only a week to go until I check in for the belly button surgery of my dreams, there is a potentially real chance that it may, just may, never ever happen again... at least one of the things.

Everything was yummy, but Abigail complained a small bit when she heard it was meat sauce, and Peter, her boyfriend, couldn't understand why. Partly because of not "getting" the connection between meat sauce and no cheese on top, plus no ice cream ... and partly because, I suppose, in the trayfe world almost every spaghetti sauce has meat in it, unless it's explicitly a vegetarian one. I hadn't thought about that, but I suppose it's true. Most people have meat in their sauce.

Oh, and Elisheva and I volunteered at the UJA telethon all afternoon, so we stopped at Fortino's on the way and picked up a couple of desserty things so Abigail couldn't complain too loudly in front of my mother. They didn't have Tofutti Cuties, so bought another brand and they were, apparently, yucky. I passed on those and had another of the desserts instead.

With only two pounds to go, I can afford a little dessert, right?

Oh - the telethon! It went great. I was only slightly nervous, jumping in. Elisheva sat refusing to call and refusing to call and then finally, after about an hour, decided she wanted to get a pastry and drink. I said, "make one call first - they're for the people who are calling." So she did, then left to get a snack. When she came back, whether invigorated by the tin of coke or emboldened by the success of her first call, she started picking up some of my sheets and calling them... and eventually ended up with a stack of her own. I was so proud of her - my little girl who is still afraid to speak to shopkeepers!!! Love.

Ted's waiting for the computer, so...