Ahh, the strollers I have owned... 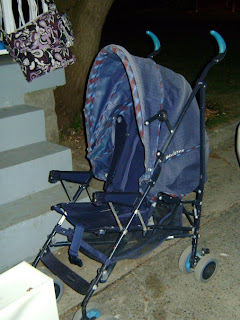 Here's the MacLaren when I first found it, back in April. 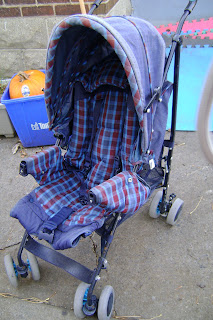 and here it is now!


I think the wheels look WAY more worn-down now, in the second picture. Also, the canopy is a little more bent & broken-looking than back then. But I've offered it to Freecycle anyway; I hope somebody claims it, maybe as a secondary or car stroller ... 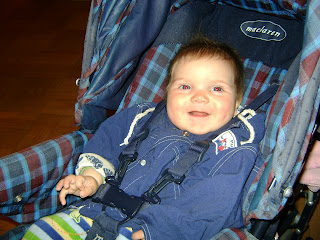 I was certainly thrilled to find it and have definitely gotten my money's worth out of it the last seven months. Here's Gavriel Zev looking pretty proud of himself in it, back when it was "new". :-)

What was it Dr Larch used to say in Cider House Rules...? "The MacLaren has found a family. Good night, MacLaren." Well, not yet, but I hope before the weekend, so Ted doesn't kill me that there's another stroller sitting around here.

Ted had the idea of roast-beef sandwiches, so I bought them from Toronto Kosher. Then, we had French Fries, pea soup, fresh from the freezer rye bread, even leftover pie from Shabbos... Sara, Abigail and my mother came over... and then Judy dropped by, so it was a little crowded around the table, but fun nevertheless. (she called ahead and asked if it was a good time - what was I supposed to say, "no?" It was a FINE time, as long as she didn't mind being a bit crowded and shouting over the din if she wanted more meat. :-)

Plus, I wanted to be nice to her because I had the idea that maybe she could take the kids on Tuesday mornings when I go to my a.m. aerobics class, so GZ won't scream at the daycare ladies the whole time. :-(

Tonight, we'll have spaghetti and red-pepper-tomato sauce, garlic bread, uh-oh - cauliflower soup that I'd better get cooking. Gack. The afternoons go so quickly.