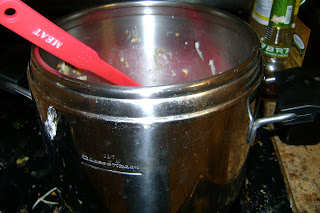 Got Freecycled a Lagostina pressure cooker (Brava model?)! So last night, our first on-our-own, non-Shabbos, post-Yom Tov meal (last Thursday night, we had leftovers), I made pressure-cooker "risotto." Vegetables, mushrooms, wine, leftover chicken soup, Louisiana chicken sausage, whatever else I had sitting around, plus some Arborio rice.

Mmm... I put "risotto" in quotes, however, because it wasn't creamy and soft like I suspect real capital-R Risotto is supposed to be. The dumb thing wouldn't come up to pressure for the longest time, so basically, I suspect the rice cooked in the normal time. Veggies were nice and soft and eatable, however. 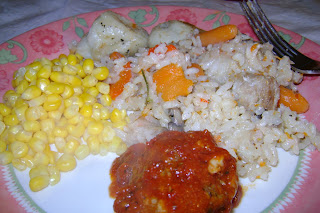 The red stuff below is leftover meatballs from Shabbos. Also, I dumped the leftover chicken soup in the pressure cooker, but didn't want to waste the nice kreplach, so I fried them in my small pan a la pot stickers - yummy! They're the slightly slimy-looking things at the 11:30 position on the plate at the left. :-)

I love how the steam is still visibly rising from the meatballs in this picture. How come magazine food pictures never have steam? Oh, yeah... because the food is underdone and inedible and they sit posing it for hours under lights. But at least it looks a bit more yummy when they're done.

More to come now that Yom Tov is out. Feels like it has been days and days of non-stop laundry so far.

The baby is going through another phase of waking up in the middle of the night. Baah. At that time of day (around 12 or 1) I simply hate babies. For his own preservation, he must regain the skill of sleeping through. Right now, I go in to him, sing a bit, pat him, but he's usually kicking and flailing and just seems SO angry. But last night he cried less after I went out than he did the night before, so maybe it's easing off.

But then he was so tired this morning that he started screaming at the childcare program halfway through my aerobics class. They called me out and said he needed changing, but I checked and he wasn't too bad. He was just crazy-tired and wanted nummies and wanted ME. I told them I'd be out in 15 minutes, but just a few minutes later they were back and his screams were reverberating through the halls. So I packed up my stuff and left the class to nummy him in the childcare room.

They had served Naomi non-kosher crackers - oops, must tell them next week to ONLY give her the snacks we bring; they're not "optional extras" - and after I told her to stop (I promised her crackers when we got home) she just kept scarfing them down like they were the most delicious thing. I explained in the car that Hashem said everybody could eat crackers, and if people were a yid (Jewish) they should only eat kosher crackers.

She is at a totally defiant age, however. There was a stale old pretzel sitting in the car and I told her she shouldn't eat it, so of course she popped that in her mouth, too. Or at least, she made a chewing motion with her jaw and TOLD me she'd eaten it. So then I said no crackers - aargh. So I gave her two crackers, and she went and snuck some pretzels from the same box.

Meanwhile, I was rushing to get the baby to bed because he was still so crazy-tired, but once he got to bed he "bounced" and refused to sleep. Even with a cloth book and Naomi's "eyes-baby" that he loves because he's allowed to poke her eyes and she has real eyelids with lashes. I don't let him do it with me or Naomi, so poking eyes has become his obsession. :-)