Okay! Maybe the FOURTH time's the charm. If this post works, I'll fix up the formatting later. Not like anybody reads these things anyway... sigh.

And by the way, I $#!% hate Picasa because this is my second time typing this in and the interface is so buggy it crashed in the middle of my longest, most heartfelt post in a LOoong time... >:-(((( 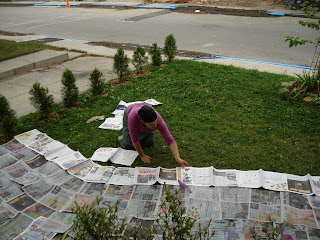 SO: here's what I did today - besides hang out at Riverdale Farm for their annual Fall Fair (no, it's not fall yet, but it was a good fair anyway and we really must go back next year... although there are so many things I say that about and then we never get around to doing it.)

Full album here: http://picasaweb.google.com/Jay3fer/lawnrepair
I cannot believe all that green stuff is gone. I mean, it wasn't grass, but now we don't have it at all. Keep your fingers crossed... can one say tehillim for a lawn?

Supper: We had the O'connors, and as my mother says, they were delicious. Chicken things on sticks, marinated in coconut milk, delicious with plain basmati rice and stirfried garden beans and mixed peppers. If I sound irked, please remember I typed this all in one time before and then lost the whole bloody thing.

Amazing, seeing their twinnies and Gavriel Zev together - the two month age difference really doesn't seem like all that much, though they are both walking nicely and GZ seems light-years away from mobility.

Speaking of accomplishments, he said "dance" yesterday, and did a little dance as if to prove his point. He must have a 20-word vocabulary by now... would be nice if he chose to include some of the more mundane words like Mommy and Abba at some point. ;-)

I think there was more, but like I said, I'm irked, and tired, and it was very heartfelt and my heart stopped when Picasa crashed, so I've just typed in the basics and maybe I'll have energy to do more tomorrow.

Oh, two things I just remembered I forgot from the original post.

MY accomplishment: Last Thursday, I took the Littles to do our weekly family grocery shopping. Ted has been doing it just about forever, but it's totally not fair to him and I hope I managed to save him a little time, because it was %#!% bloody hard on my own with the kids. Not too bad at the store but then they were so hungry - well GZ was hungry - by the time we got home... NOTE TO SELF: prepare lunch ahead of time!!!

Also, last Thursday, took the kids to a playgroup at the Temmy Latner Forest Hill Jewish Centre. Naomi's a bit too old - the average age seemed about 6 months older than GZ... But she didn't seem to mind, and it provided a lot of the Jewish content I feel is crucial for her at this stage. Reminded me also of how little I know in terms of Jewish songs for holidays, etc. Hopefully I'll learn something there, too. I plan to go back as the time is not too inconvenient.

Anyway. Remember I said I was tired and irked?I'm only posting here because I haven't in so long. I sure do hate Picasa at this moment. Aaaargh. The blogging interface is so crude and buggy... I really hope there's a new release in the works. The kids say about our collection of mostly found-in-the-trash carriages that you get what you pay for. I guess that's true of photo management applications as well. :-((( 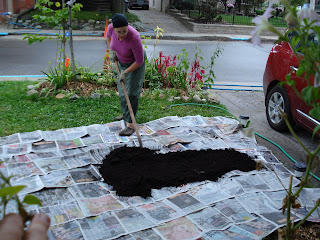 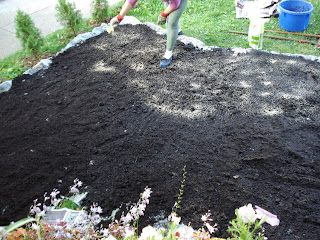 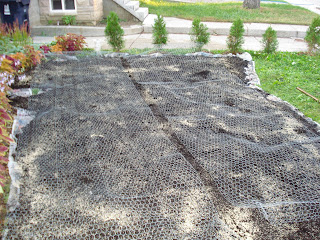