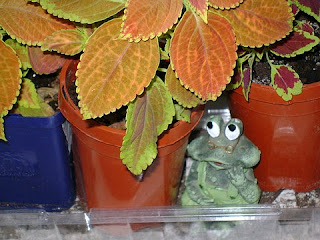 Did I mention we got a new camera?  ;-)
YAY!
Once again, it never rains but it pours - and that's all I'll say about that.
Listening to a lot of Dennis Prager these days!  I was complaining to a guest over Pesach that he didn't have any downloadable audio on his site... and he said, "what are you talking about?"  So apparently, there's a new site, pragerradio.com, that has all his recent shows, hour by hour, downloadable as MP3's!
Then, when Ted's brother Richard was in over the weekend, he mentioned that Stuart McLean's Vinyl Cafe shows are also available for download from CBC Radio.  Needless to say, there's lots of good listening going on around here now - almost too much!
After seeing the Amazing OBall a few different places around town, I finally broke down while we were at the Science Centre and bought one... $8 for a baby toy - urgh.  Guess I'm just a sucker for a "pthalate-free" label.  (I mostly try to buy non-plastic toys, or only hard plastic...)
Maybe I actually have a picture of our actual baby using the ball...?
SUPPERS:
Monday - hmm... so long ago... umm... something cheap and starchy, no doubt... I just remember that there was bread.  And salad.  Oh, yeah, frozen blintzes.
Tuesday - quiche, salad, frozen peas (lightly cooked)
<3 J