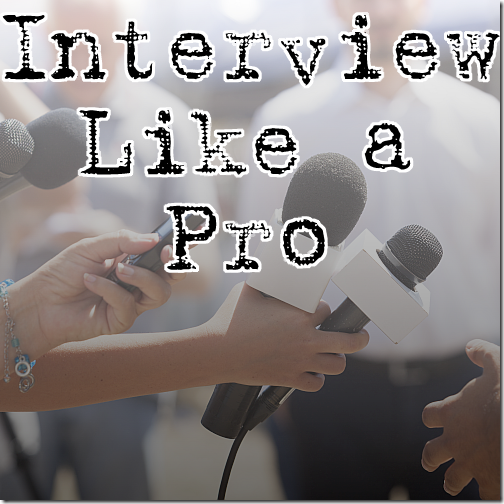 What’s the secret to my success as a writer?

Actually, I would say I’m doing okay as a writer.  I’m writing more or less full-time these days, even if it’s not all the kind of writing I love to do.

I don’t usually offer a peek behind the scenes into my writing life.  However, one of the big shifts of moving to Israel has been transitioning my own identity, from being a homeschooling stay-home mom to a full-time freelance writer.

Over the years, probably the biggest hurdle I’ve cleared as a writer is learning the art of interviewing.  I knew, starting out, that I couldn’t just sell my own words.  Interviews make almost any type of article better and more authoritative.

Why interview?  Being able to interview well opens the door to a richer, more successful writing career in a few ways:

But here’s the thing:  I hate talking on the phone.

If you’re anything like me, the thought of interviewing anybody fills you with fear – let alone somebody well-known.  To this day, picking up the phone (and nowadays, pulling on my headphones), still fills me with dread.

In her new book, Furiously Happy, Jenny Lawson shares some advice she received from writer Neil Gaiman, which says, “Pretend you’re good at it.”

Essentially, that’s what I’ve been doing over the years… except somewhere along the line, the word “pretend” dropped off and I found I really was doing the job.

And you know, it actually started to be kind of fun.

Watching an interview with an expert on sex and disabilities, a guy in a wheelchair who happened to be Jewish, I thought of a million things I’d love to ask. I sold a Q&A to a Jewish paper in his area. I’d read a book and realize the author hadn’t explained something I wanted to know. I’d watch a TV show and discover that the host was going to be in town on a tour in a few weeks.

Not every interview was high-profile. A local knitting group made hundreds of blankets for a local charity. An Israeli midwife wrote a paper about differences in birth experiences between Arab and Jewish women in Israel.

How did I psych myself up before my first interviews? I made it easier for myself by pretending I was calling a business.

Have you ever bought a barbecue?

Most people aren’t afraid to make a few calls when they’re in the market to buy something.

Maybe you phone the barbecue store to ask what models they have, in what price ranges. It would be a pretty bad store if they refused to tell you. Those are the types of questions they expect from any potential customer.

That’s true of anybody you’re interviewing, no matter how high- or low-profile. Who doesn’t love to talk about themselves? Figure out what they’re “selling,” then chat about the details.

Here are a few guidelines that I’ve worked out over the years to help me make it through my interviews.

1. Be tech-savvy: A voice recorder app is great, but test it at home first. I interviewed a Canadian Member of Parliament (MP) once only to come home and find that the recording was full of gaps because the app had “intelligently” detected pauses in our conversation.

2. Go low-tech: Even if you’re recording, make notes as well so you don’t have to go through the entire recording for the highlights. Jot down potential questions and other issues that come up while the other person is talking.

3. Get comfy: I love phone interviews… but hate the stiff neck from gripping a phone and type at the same time. Get a headset to talk hands-free. Make sure you get your family, pets, and any other noisemakers out of the area before your phone call.

4. Be a pro: set a time ahead of time and be prompt. Look the person up online ahead of time, and learn about the issues. Skip boring or obvious questions you can answer using Wikipedia. And don’t talk about yourself unless you’re asked. The MP from Edmonton doesn’t want to know that you spent three years living in Calgary even if they are both in the same province.

5. Plan questions ahead of time: Make a list. Even if you’ll be winging it, bullet points will help, at least for your first few interviews. Decide what you’re not going to talk about as well, and an approximate time limit so the interview doesn’t expand to fill more space than you have for your article.

6. …But be spontaneous: Make it a conversation. Don’t just charge ahead with your list of questions. If the person you’re talking to says something startling or interesting, jot it down. But don’t let the person ramble. Be reasonably firm – explaining your focus can help. Explain that you want to talk “about getting out of Nazi-occupied France” instead of “your experiences during the war.”

7. Get concrete details: The person says that in his spare time, he loves playing sports. So you move on… right? Nope. What kind of sports? Who do they play against? If he’s a local business leader, how is their attitude the same or different on the playing field? If she says she writes, find out what. Memoirs? Children’s books? These are telling and interesting details. Don’t assume; if something piques your interest, ask. These details give your story more authority and substance.

By the time you reach the end of your questions, you’ll hopefully have established a good rapport. You’ve been nodding, chatting, and now your time is nearly up. Whatever you do, don’t just say “thanks” and hang up, or walk away. Wrap it up with a “summary” question, which I call “the invitation.”

This question goes something like, “What do you wish people knew about ___?” Rework it depending on the circumstances. Maybe ask, “What would you tell people if you could…?” or “What mistakes do people make about…?”

This does two things.

One, it lets them know that the interview is almost over.

Two, it lets them jump back on topic. They can take their best shot and try to sell you that barbecue: share their path to stardom, or reflect on child poverty, AIDS, animal rescue, or any topic they cherish.

“Everybody loves to talk about themselves”

Remember, everybody loves to talk about themselves, as long as they’re sure you’re really interested. So get over your fear by realizing that the spotlight isn’t on you – it’s on them.

I hope that by sharing these tips, I’ll help give others the confidence to pick up the phone and ask the right questions.

As I’ve learned, others’ words take your writing out of your own head and into the broader world. Your articles will be more compelling and well-rounded – the kind of writing editors love to see, because readers turn to it again and again.

[NOTE:  All the links above are to my own articles, all written based on actual interviews!]