There are more things in heaven and earth… Than are dreamt of in your philosophy.
- Hamlet (1.5.167-8), Hamlet to Horatio

Before you start to wonder what this post is doing here:  yes, I realize that I have an aliyah blog, and that’s usually where I post most of my goggle-eyed musings about life in Israel.

About Jewish life… or about frum life.  A word I never, ever, ever liked.  Never, never, never.  You can find tons of old stuff on here that proves it – like this post, about ortho-BOXing me in, from 4 years ago.  Or this post, about being spiritual vs being religious.

Where I am right now, frum is a word I never, ever, ever have to use unless I really want to.

It turns out the problem wasn’t with me.  The problem was that there simply weren’t enough ways to be Jewish, at least where we were living.

Oh, I’m sure the ways exist, if you’re creative or defiant enough to go against the grain.  Nobody forces you to put on a certain hat or daven at a specific shul.  I’ve actually met a number of creative, defiant, fabulous Jewish people of all stripes (lots of them are homeschoolers!) who let all those stripes hang out fearlessly.

So maybe the problem is me, and fear.

Often, it comes down to what we wear:  a certain shirt, a certain hat, a certain type of stockings or shell or sheitel.  Closed-toe shoes; skirts, jeans or otherwise, with or without pockets in the back.  A half-inch of hair peeking out, in the front, or in the back.  A certain length of peyos, or beard, or tzitzis.

There were not many choices where I came from, if you wanted to make yourself look like a religious person.  Which you kind of had to do if you wanted to be accepted.  (Except for the aforementioned creative defiant people, who are usually also taller and thinner than I am.)

I was thinking about all of this on my way home this Shabbos, Friday night.  In Israel, at last, and yeah, there are days and weeks when I still cannot get over the fact that we’re here.

Because being Jewish can be just so mind-blowing here, in so many little ways.

I was walking past the busy, active Bnei Akiva youth group building where all kinds of Jewish teens hang out until all hours.  Some wore yarmulkes, some didn’t.  (Bnei Akiva is the “less” religious youth group in our neighbourhood; there’s another one where boys and girls are separate.)

But all these kids were hanging out, laughing and shrieking and talking and having a good time – not at the mall or some alleyway somewhere (do kids hang out in alleyways?), but in the park and playground and at a youth centre.  Nobody seemed overly worried about how they were dressed.  Some kids wore pretty typical Shabbos clothes; others totally didn’t.  I don’t know what Shabbos looks like in their homes; I doubt it’s the same everywhere.  I hear the TVs, I smell the smoke.

I know that not everybody does what I do.  But the streets are closed, and so the community comes together.

It’s not just kids.  Down the street, I passed a group of men who looked to be in their early 60s, doing exactly the same thing.  Some were dressed for Shabbos, others weren’t.  Some wore yarmulkes, others didn’t.  They were all just hanging out in the middle of the road, chatting and having their early-60s guy version of fun.

This is not everywhere in Israel, you understand.  But it is very, very special, and it is where I live right now.

This is a place where Jews who look different get together and hang out and don’t seem to worry too much about who’s wearing what.

When Shabbos is the one day everything shuts down and everyone comes together.

Where Shabbos isn’t oppressive, because it’s the day all your friends are free.

I find myself wishing I could have raised my older kids in a neighbourhood like this.  Where everything shuts down, where nobody judges, where there is a world of choices and they’re all Jewish ones.

Okay, yes, I am not living on the moon.  I know that for some people, the idea of Shabbos is oppressive, period. 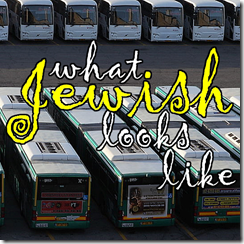 These buses parked in this picture?  To me, they’re all about tranquility, rest and holiness.  But to people who want to get around on Shabbos, it’s oppressive that they have to take taxis or drive or find some other way to get around.

And those kippahs in the picture up above?  To me, they’re a rainbow of colour, of choice, of possibility.  But to somebody unwilling to consider the centrality of yiddishkeit in his or her life, they’re probably all equally unsatisfying headwear.

But I still think that if you grow up with a non-judgmental Jewish way of being, where there’s not just one picture of what Jews look like, then you’re more likely to grow up wanting to incorporate Judaism in your life as an adult in some serious way.  Or at least, seeing how it might be possible.

Perhaps you’re less likely to go off the derech, if the derech is a well-worn path as wide as the Yam Suf, with 600,000 grooves for every single Jew to find his or her own.  Yes, at some point it isn’t Torah; at some point, it’s just doing what you want.  It’s lazy Judaism.

Allow me to believe today, in my post-Shabbos glow, that there’s a place where we do all get along.  Where we cherish our traditions together.  Where Judaism is about opening windows, not about closing doors.

And if you have never seen a Judaism that’s anything like that…there’s a good chance you’re searching for it in the wrong country.