One last, truly fabulous meal in Israel – uno, Tel Aviv (and a not-so-fabulous beverage in the air)

Not only didn’t we have a reservation, we weren’t even planning to end up in Tel Aviv.  Yet we ended up having what was – while I won’t call it “the meal of a lifetime” – a truly mind-blowing, delicious food experience.

We got to the airport from Nahariya by train four hours early for our flight, hoping to at least check our bags so we wouldn’t have to shlep them around.  But it turns out Delta didn’t open up until 9 pm (for a 12:40 flight), so we were stuck with the bags and time on our hands.

So… off we went, by train, back into Tel Aviv.  Not knowing the city at all (having done zero research), I picked a station (one of 4 stops in TA) that sounded central:  Tel Aviv Savidor Centre.

In the five or ten minutes we had of good-quality Israeli train wifi, I pulled up a map of the station (not as easy as it sounds on my little BlackBerry Playbook!!!) and googled “Top Five Kosher Restaurants Tel Aviv” and came up with this article, which listed five addresses, none of which I had ever heard of.  Three of the restaurants listed, it turned out, were practically back to back, near the corner of Shaul HaMelech and Weizmann Sts…. and about a ten minute walk from the train station I’d picked.  Awesome!

We had been hoping for a scenic route and were disappointed by the darkened streets of hospitals and offices that we ended up shlepping past.  Still – bright lights, big city.  Coming from Toronto, I can say that Tel Aviv easily felt the most like home of any of the Israeli cities we’d visited, just because of the tall, gleaming office towers and busy city people and buses rushing past.

And then we found the restaurant we’d been dreaming of:  uno.

At the base of a really tall office building, it is a gleaming jewel from the outside, and inside, a cozy bistro / bar feeling place with lots of mood lighting, cozy wood accents, and a really well-stocked bar.

This was nothing like ANY kosher restaurant I’ve ever been in – in Jerusalem, New York, or anywhere else.  It was just a restaurant, period.  I did check the teudah (kosher certificate), partly not believing my eyes.  Lots of srugi kippot in the house, including one kippah-wearing guy apparently on a date with a lovely woman in a skimpy spaghetti-strap top… nothing you would see in chutz la’aretz (outside of Israel), that’s for sure.

After chiding us for not having a reservation, the hostess happily seated us at the long bar.  The bar stools were comfy but very high, so I felt a bit dwarfish… but never mind.  We ordered (to share) an individual pizza and the creamy ravioli, along with glasses of wine.  The food arrived quickly enough and while the portions were not extravagant, neither were the prices.

My first bite of the pizza was, honestly, mind-blowing.  Now, I bake a LOT, and I make good pizza – really good pizza.  But this was GREAT pizza.  Just picking it up, I knew I was in for something extraordinary – the tell-tale grit of semolina, the rigidity of a solid crust that doesn’t droop, the crunch of an excellent cracker.  But then – wow! – inside the crust (which was very thin) was just a hint of the moisture and spring of a really, really excellent bread.  At the same time, I was being blown away by a) the best pizza sauce I have ever tasted, infused with fresh basil and so many other flavours, along with b) the best pizza cheese I have ever tasted… just unquantifiably, indescribably delicious.

It doesn’t look like much, but I assure you – utterly delicious!  The pasta was excellent, by the way, but I wouldn’t describe it as mind-blowing in the same way as the pizza.

As we ate and sipped our wine in total satisfaction (a difficult state for me to attain!), the bar guy presented us and the others at the bar with two little strawberry-mint mini-daiquiris (in shot glasses) that he’d just whipped up.  Don’t know if this is a regular thing, but it was a NICE touch.  I have been hankering for a strawberry daiquiri, well… since the summer.  Just too lazy to get out all the stuff and make one.

Since they did such a great job with the pizza and pasta, I decided to trust them with dessert.  They apologized that the dessert menu was only available in Hebrew, but I managed okay, since “tiramisu” is the same in both languages.  We shared it and it was utterly perfect, creamy and rich, with a bit more of a chocolatey note than we usually hit with ours at home: 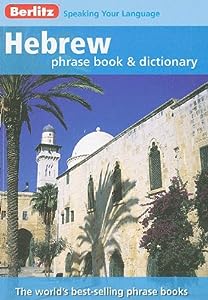 The bill for all of this, when it finally came, was under 200 shekels – making it an $80-$90 meal, all-told (not including the tip).  Not the most filling meal in the world, but by far one of the most satisfying we’ve had in a long time.

(On a side note, my invaluable Berlitz phrase book says you’re supposed to ask at restaurants in Israel if the service / gratuity is included (“zeh kollel sherut?”), but the two times I tried it, the waiters looked at me like I was nuts.  Any Israelis care to enlighten me?)

We weren’t so stuffed that we couldn’t shlep back to the train station.  Indeed, given that the next day was a fast, we actually ate the supper we were offered four hours later when our plane was finally in the air (serviceable food, but no comparison, of course!)… and the breakfast seven hours after that (mediocre egg thing – the less said, the better).

And then… just in case we thought Hashem wanted our trip to end on a high note, culinarily:  our Badatz kosher breakfast trays included, instead of the amazing fruit juice Israel is famous for, a cute pouch of this Bambi-inspired “Mami” grape drink, labelled entirely in Hebrew, that turned out to be entirely artificially flavoured and sweetened with both saccharine and cyclamate.

After decoding the Hebrew label, I puzzled over the big words on the front for a while until it came to me:  No food colouring.  Yay!  But still, disgusting.  And when I asked a flight attendant for juice instead, she said, “there’s juice included on your tray.”  To her credit, once I’d explained that there actually wasn’t any juice (with Ted clamouring in the background, “no-one cares!”), she came back with what she claimed was the only orange juice container on the entire plane.

It was from some indeterminate European country and was utterly delicious.

And now we’re back here… dreaming of returning, of eating at uno again, and the world of delightful eating opportunities that we may never be able to afford again.