From the Archives: A Floppy Yarmulke Rant 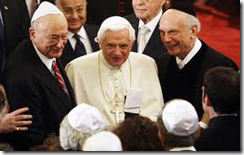 Written in July 2001.  I suspect I’d been reading C.S. Lewis.  Something high-falutin’, but I still agree with the sentiments…

It probably sounds shallow to say I left the Conservative movement because of floppy, wrinkled, disposable-quality yarmulkes. Even though I grew up admiring my grandfather, who kept the classic pointy black model with him at all times – perfect for shivah houses or, later in his life, popping into shul for a Kaddish, I’ll say it again: those kippahs are why I left the movement, and why I’m never coming back.

A few times in recent years, I’ve visited Conservative synagogues; perhaps to hear a rabbi I respect, or simply for nostalgia. There’s something very peaceful about sitting back in the seats and submitting to hours of a Conservative main-sanctuary service, cantorial performance and all. 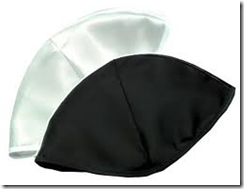 In Orthodox synagogues, even as a woman, I feel like an active participant – I stand up, sit down, sing along with the chazzan – surprisingly, it often feels more egalitarian because I’m surrounded by other women doing the same. When I visit Conservative synagogues, I’m a small shuckling fish in a big sea of motionless mouths.

So where does the kippah come in? I couldn’t figure it out either, until I visited a Conservative synagogue I’d never been to before. Sure enough, I was floating among the glossy, floppy yarmulkes. Some reminded me of my grandfather, with a quiet, pointy-headed dignity, but others were more reminiscent of street people. These are on men who woke up, put on Armani and a matching tie; these men care about how they look, but the yarmulke is not part of that look.

During the Amidah, I ignored the kippahs and everything else around me and turned to the siddur. I soon realized that I’d have to ignore that, too, as I murmured from memory the traditional Amidah. The Hebrew is so similar the differences are hard to spot. Just a few small grammatical quirks – but the quirks add up. The traditional version includes an entreaty for a rebuilt Temple; the Conservative version depicts Temple services as something our ancestors used to do; something that is long-gone, like an undesirable chapter of our history.

When I glanced over at the English, I noticed that the passages of korbonot, sacrifices, were omitted altogether. They’d been replaced by tasteful references to sacrificial texts in scripture. This was the siddur I’d used growing up; how had I never noticed this void? 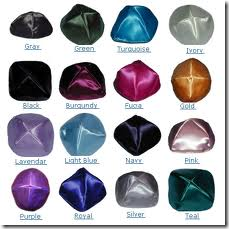 Though some attend day schools, most Conservative Jews only attend afternoon Hebrew school growing up. And few have more than a passable reading ability in Hebrew. So most rely on the English for any deeper meaning they hope to get out of the prayer experience. I found it odd that the passages hadn’t been omitted in Hebrew – the language the Amidah would be mumbled through by the Chazzan – but only in English, the language worshippers would understand once they got back down into their seats. What was it that the movement didn’t want its members to see?

Well, if you must know, those passages are very specific, outlining the regular and additional offerings for Shabbat, the exact animals and proportions – the mundane details of Temple worship. Combined with the subtle rewording of other passages, the effect of the Conservative Amidah is to eliminate entirely the concept of the messianic hope.

The traditional Amidah teaches us that the world’s current manifestation is not its ultimate and final form, but the Conservative Amidah says the opposite – that the here and now is as good as it gets. Sure, our ancestors did these primitive things with goats and libations, but that was then and this is the wrinkled-kippah here and now.

The traditional Amidah isn’t just a poetic bit of historical reminiscence; it affirms our hope for the future. The Conservative Amidah does express hope for the future, but it’s not a specific hope, and without the specifics, congregants lose hope. I could barely finish saying my own Amidah, there in that Conservative synagogue, could barely stop myself from crying, imagining a congregation of Jews fumbling so badly when it comes to passing the torch that has lit our way for so long.

C.S. Lewis said that if our souls are not immortal, then societies are more important than our souls. Almost anything is more important than our souls if our souls don’t last forever. Like an Armani suit. Like the shiny shoes, like the silk tie; we help ourselves to the best of everything, then slap a beanie on top when we want to look like Jews. Shouldn’t it be the other way around? Shouldn’t our Judaism be the most polished part of ourselves, if that is our true kernel of immortality?

Does every Orthodox Jew believe that he or she will bring korbonot, someday soon to a rebuilt Temple? Probably not. To be honest, sometimes I don’t even know where I stand on that. But is it hypocrisy to say it if you’re not 100% sure what the future holds? Actually, it isn’t hypocrisy any more than studying a martial art is hypocrisy if you’re not a black belt. Concrete faith – that is what has pushed Judaism forward all these years.

But even while striving for perfect faith, there’s a lot to be said for taking matters into our own hands as well – without that drive, we wouldn’t have the modern State of Israel. There’s a joke about a man who prays at the Kotel, the Western Wall, for years, and finally, someone asks him, how does he feel? His answer: “Like I’m talking to a wall!” At least he kept talking. The Conservative movement has effectively closed up shop and gone home. There’s no contradiction between building Medinat Yisrael and praying for redemption from Heaven. The only contradiction I see is within those for whom Judaism is temporary, a floppy-yarmulke commitment, because then, something else is bound to take precedence.

Give a Jew a vague Amidah, a bunch of ephemeral, indefinite hopes for the future, and he’ll give up hope altogether. Look how many years politicians have been letting us down, but still, we turn out to vote each election year. If you don’t vote, you can’t begin to hope that things will ever be better.

Praying for the Temple doesn’t mean the Temple is going to be rebuilt – but neither is it foolishness just because we don’t see results in our lifetime. Remember the story of the old man planting a date tree, even though he’d never live to see its fruit? If we want our grandchildren to inherit a forward-looking, optimistic Judaism, you’d better grab hold of that future for yourself right now, while you can.

And while you’re at it, take a few minutes to pick yourself up a nice kippah. Maybe something in suede; maybe with your name embroidered. Make it something really nice; after all, you’ll be using it for a long time to come.