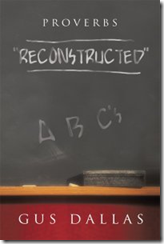 I recently received a free review eBook copy of Gus Dallas’s Proverbs, Reconstructed from BookSneeze.com.  I get the books for free, but I’m not paid anything for my reviews and am free to say whatever I like, although – presumably – if I say enough negative stuff, they could stop sending me books…

Sometimes, a review book falls into my lap that is funny, or at least entertaining, and I’m grateful for the serendipity of it all. This book, with its awkward quotey title, is NOT that book.

As a Jewish reviewer frequently inundated with Christian books to review, I was actually kind of excited to be getting something that was at least relevant to my own scripture.  And it is… kind of.  But not really.

First of all – what the heck is this book?  Well, it wasn’t quite what I expected.

Basically, it’s a list of quotations from Proverbs (in Hebrew, it’s known as Mishlei, :allegories”).  The quotations provided are all from the New King James Version of the Bible, which, from what I’ve seen, is a decent, readable translation.  The secret, if this book has one, is that instead of appearing in numerical order, as they do in the Tanach (Bible), the verses are all cross-referenced by topic.

There’s a big index of topics at the front of the book, everything from Abomination, Adultery, Adversity and Advocate all the way to Work, Worry, Worship, Wrath and Zealous.  Actually, Wrath appears twice – once with a “Good” entry and once with a “Bad” entry.

Having looked through the book and played with it quite a bit, I’m still not sure what Dallas means by “Good” and “Bad”.  There are actually many double entries like this throughout the book.  As an example of “good” wrath, Dallas lists Proverbs 15:1: “A soft answer turns away wrath, but a harsh word stirs up anger” (and four other, separate verses).  But for BAD wrath, he lists many more, including, 19:12: “The king’s wrath is like the roaring of a lion, but his favor is like dew on the grass.” I’m not sure I get the distinction, honestly.

Dallas, who has apparently not written anything else of a religious nature before, adds his own touch to the book mainly through a brief introduction in which he makes sweeping and unconvincing generalizations about the need for his book:  “…Many have been instructed to “read one Proverb a day.” But that does not work.”

The very first sentence in his introduction ends with the word “etc.” and the thing only gets fuzzier from there.  (“all the information in the Bible is useful for reproof, instruction, etc.” – did he forget what else the Bible is useful for?)  He goes on to call the Book of Proverbs, “the sign to us that the Bible does not despise common sense and good judgment.”  THE sign?  There’s nothing else in the entire thing (and since he’s Christian, that means 66 books!) that makes any sense or “does not despire” good judgment?  I’m surprised to see these annoying generalizations in a book from a religious publisher – of any religion.

Another paragraph from this fairly short introduction to a list of quotations is so overblown as to be meaningless.  “The whole strength of the Hebrew language, and of the sacred authority of the book, is thrown upon these homely truths. It deals of the finer shades of human character so often overlooked by theologians, but so necessary to any true estimate of human life.”  Honestly?  If Dallas truly believes these “shades of human character”  have been overlooked by theologians these past four millennia, I am left doubting he’s truly read any.

But enough of Dallas – let’s let the Proverbs speak for themselves, on subjects like…

Adversity (which, by the way, is noted as “Bad” at the top of the page):

For about fifteen years, I’ve had a free plain-text copy of the Masoretic edition of the Tanach on my hard drive, along with a copy of the King James Bible and the Quran.  It’s nearly instant to search these text files, because they are only a few Kb in size each.

Looking up “adversity” in the Tanach, out of curiosity, I found the two Proverbs references Dallas includes in  his book, plus a few others, including a nice one from Koheles (Ecclesiastes):  14  “In the day of prosperity be joyful, and in the day of adversity consider; God hath made even the one as well as the other, to the end that man should find nothing after him.”  I like it; it’s perhaps the most meaningful passage of all on this particular topic.

Beyond the standard “snippet,” there are a few longer passages.  The “eishes chayil” passage (31:10-31) is quoted in its entirety under Woman (“Good”).  There’s a corresponding lengthy description of a disreputable woman from 7:6-27 listed under Woman (“Bad”).

To be very honest, the “index” at the front of the book seems more like a list of computer-generated key words, than an actual thoughtful index which might be helpful to a person looking for Scriptural insight on pressing topics like marriage (nothing listed), childbirth, graduations, or divorce (though adultery and widowhood are covered).  Heaven help you if you want to write a sermon, or speak, or write on a somewhat contemporary topic like the environment or war.

Poverty, however, is covered with tidbits like 10:15: “The rich man’s wealth is his strong city; the destruction of the poor is their poverty.”  Oh-kay!  I’ll have to slip that one in the next time I’m writing about homelessness!

Here’s a fun surprise!  Despite the Book of Proverbs having been written perhaps 900-1000 years before any type of Christianity was born, there are references in the master index to “Christian” and “Jesus.”  When I saw this, I laughed, and then flipped to find out what King Solomon has to say about these things!  Let’s find out…

In his introduction, Dallas says “’Reconstructed’ is ultimately the best way to access the scriptural gifts from our heavenly Father offered in Proverbs in order to improve our lives.”  I beg to differ.

Perhaps it’s useful as one way to find ideas quickly for a speech, sermon or blog post… but deep insights are few and far between here and in terms of “value added,” nothing here, in the eBook version, at least, that you couldn’t do yourself for free.  Perhaps this is something people are dying to have in print, but frankly, a decent concordance is probably a better long-term investment in your spiritual bookshelf.

My next BookSneeze review:  Called to Controversy: The Unlikely Story of Moishe Rosen and the Founding of Jews for Jesus, written by Ruth Rosen, his daughter.  In the meantime, and probably more eloquently than I could ever have written it, here’s one Jew’s take (and not necessarily my own views) on the life and death last year of this organization’s leader.