FREE! Song School Latin Xmas Units, for Jews or anyone who isn’t celebrating

* If you’re just here for the free supplement, scroll down to the end for more information.  I want to chat for a while with my regular readers first! 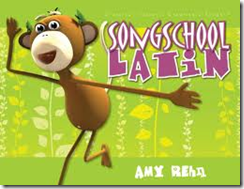 Okay, okay, I know I haven’t mentioned Latin on here, even though it is one of the most exciting things to happen in our little homeschool over the last couple of months.

To back up just a little:  I have no idea why I caved.  Elisheva was pushing me to teach Naomi a language – my protestations that Hebrew IS a language went unheard.  She does NOT approve of Hebrew as a second language.  She wanted me to do French, but I had seen this program and thought it was super-cute, and I figure Latin is kind of like meta-French.  Once you know Latin, French comes easily… right?

Anyway, it was a flimsy reason to adopt an extra school subject, but the Song School Latin curriculum is SUPER light, and we’re really, really enjoying it so far.  I won’t say “loving it,” because my sister Abigail is back, and she knows why you’re not supposed to use “loving” in a non-passive, non-adjectival way.  However, we are definitely “giving it love.”  I was worried because I’d seen bad reviews of the songs, but they are light and catchy, and no worse than any other children’s music we listen to for school purposes.  All the kids – probably all 4 of them – are running around the house singing the songs all the time.

Also – whatever you see as the cost, I paid less, because Rainbow had a “bruised” copy they were selling cheap.  (I always check there first just in case and am often pleasantly surprised.)

The program is definitely “light” in the sense of lightweight.  If you were hoping your kids would pick up Latin in record time, they won’t with this program, which meanders along at the rate of about three to five words a week.  (I guess it depends how often you do a chapter)  As we learn new words, I print out “cards” with pictures to help us remember the words.  The “cards” are actually scaled-down printouts on cardstock of the free colouring pages the publisher makes available on its website. (there are also sample chapters and sample songs to listen to)

Song School is a primary, vocabulary-only program, a prelude to more intensive study through Latin for Children, from the same publisher, or Lively Latin.

Both of these programs take the “parts-to-whole” approach Susan Wise Bauer recommends in The Well-Trained Mind, where grammar is taught alongside vocabulary, so children really understand the language, not just parrot back words.  It is my understanding that the very-popular “Minimus” Latin program takes the opposite, “whole-to-parts” approach.  But that works for some kids… as we say in Latin, “chacun à son goût.”  Another possibility is – shhh… there are rumours running around the homeschooling world, among people who care about such things, that a second volume of Song School Latin is in the works, possibly for release early in 2012.

Anyway, my preliminary review is – this is great!  At LEAST three thumbs up, for me and the two littles.  I foresee this program helping us in SO many ways, like by “introducing” and reinforcing simple grammatical concepts like nouns and verbs, singulars and plurals.  I put “introducing” in quotation marks because Naomi Rivka has theoretically seen these before in Hebrew, but I think it will be useful to her to see how Latin also has suffixes and conjugations, just like we’re learning in Hebrew.

English is such a chaotic, not-much conjugated language, that I think this is a good general introduction to how a language “should” behave.  Okay, I know the conjugations EXIST in English, so don’t flame me! We just don’t teach them rigourously, probably because they’re less regular and less helpful than in languages like Hebrew and Latin. 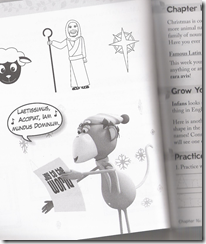 So that’s the review.  Now I segue to the one “catch” with the program:  two chapters right in the middle with Xmas themes, with chants (luckily, not songs) teaching vocabulary like sheep, shepherd, star and angel, lessons discussing Xmas, and a “chapter story” describing the birth of Jesus.  Also, our beloved “Latin Monkey” at the beginning of the section is holding a carol book and singing “Joy to the World” in Latin.  Not a happy thing in our Jewish family.

* Okay, if you were here for the supplement, you can stop scrolling now!

Basically, since these two chapters are the only thing “wrong” with the book, I came up with four pages of “cover-ups” to hide all the Christian material I could find in these two chapters.  This 4-page PDF download includes full instructions, rewritten chants, chapter story and a simple picture I made up to cover the carol-singing monkey.  Just print the sheets and follow the directions.

Here are thumbnails of the pages.  Scroll down a bit more for a link to my PDF downloads page.  Or, if you’re sick of waiting, just click on “General Printables” on the tab bar at the top of the page. 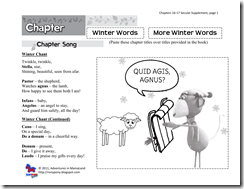 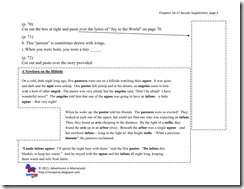 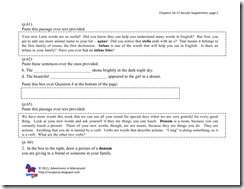 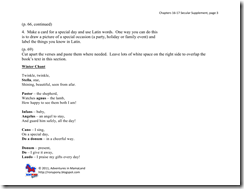 As always, if this is helpful to you, leave a comment!  Or leave one if you think it’s bizarre (or cool) that Jewish children are learning Latin and loving it…