What is going on?!?  These days, it seems like “school time” has to be stolen furtively from “everything-else time.”  We are barely getting anything done because of catching up with all the million other urgent things that must get done NOW.  Okay, you might not think yesterday morning’s “me-only” Pilates class wasn’t urgent… but that’s only because you haven’t seen the shape of me lately.  Shudder.

For one thing, by the afternoon, she is probably already in the middle of a million projects.  Even if it’s something as simple as a Barbie getting married, or a series of drawings she’s working hard on.  Just take me in front of a firing squad of unschoolers for steering her away from THAT and plunking her in front of a math workbook.  What circle of hell do you think they’d consign me to?

Then again, even if she’s motivated and WANTS to pay attention, she often can’t.  Her mind is just too exhausted from everything else that’s already happened.

That said, I have pushed it a couple of times in the last week, because otherwise, we would have been doing NOTHING, curriculum-wise, and I can’t stand the thought of another vacation on top of three weeks of Yom Tov.  I’ve tried to make it fun, and more kinetic than usual… (Am I allowed to say kinetic instead of kinesthetic, like everybody seems to say???  Kinetic means “motion”, right?)

First, Story of the World history – with a trip to Ancient China! 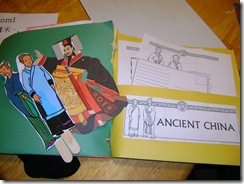 Ancient China became the newest of our Ancient Civilizations History Pockets.  I wish there were more of these.  One for Africa would definitely be good, so it would cover at least one more continent.  I store our Famous Figures paper dolls in here, too, and I cut out and assembled – with the kids’ help – the paper doll for Qin Shi Huangdi. I bought a teeny tiny hole punch and used teeny tiny brads, which work really well with these delicate paper dolls.  (I can call them brads – I bought them at Michael’s and they say so right on the package!)

I let Naomi Rivka colour the popsicle-stick Chinese man and woman on the computer; she has fun doing it, she’s learning how to use the computer, and it looks far more professional than if she’d done it with crayons (though she knows by now that the colours usually don’t come out the same as the way they look on-screen).

Here are the other pockets so far: 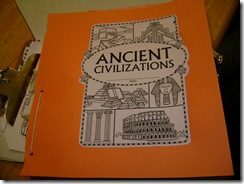 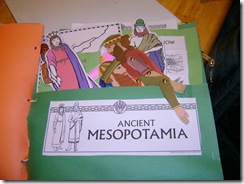 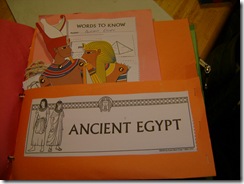 She did the mapwork for this chapter in Story of the World… but when I turned my back to look after Gavriel Zev, who ALSO gets extra-kvetchy in the afternoons, she had taken some creative license with the geography of Asia and invented a big yellow desert in the place that looked “farthest from water.”  I showed her the REAL Gobi desert, but then she got embarrassed, and when my back was turned, she coloured the whole country green to cover it up.  Still.  I love learning non-European history.  Did I ever hear about this stuff as a kid???  Did you? 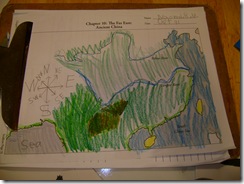 Just for fun, I used Google Translate to find and hear our names in “Chinese.”  Google calls it “Chinese (Traditional)” but I don’t know what language it actually is, or if they’re all about the same when it comes to transcribing names.  Naomi loved how it pronounced her name sort of like “Naromi” and wrote it that way when she copied it out with black paint.  Before we did our names, we warmed up our brushes by writing the numbers (which are listed, and transliterated, in the History Pocket).  My attempts are on top, hers below: 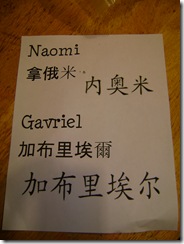 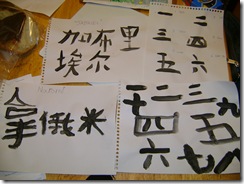 Today, we squeezed in a bit of academic stuff – not nearly enough, and then, since both kids were restless, we jumped into Draw Write Now.

At first, Gavriel Zev said he wanted to do the dog with us, but then, I think, he was daunted because it was rather difficult. (the dog in the middle is mine – the outer two are Naomi’s… this took the longest of any DWN drawing we’ve attempted so far, but she was able to work through her frustration and create a couple of very cute dogs)! 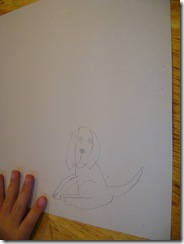 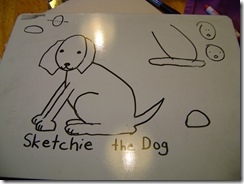 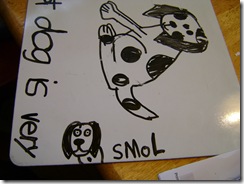 So he did his own thing for a while, and watched us, and finally asked for the book so he could draw “a gingerbread man and a hen.”  Which he did - rather nicely, I think! 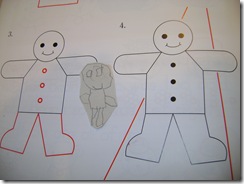 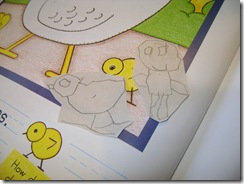 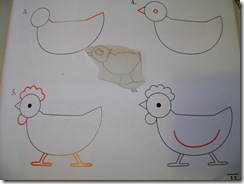 And… From the “Best for Last” Department! 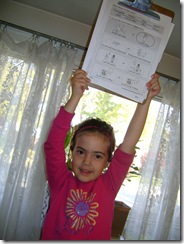 We FINISHED our math book!!!

This is Grade One (Workbooks 1.1 and 1.2) of the JUMP Math program, which we started back in January.  Though we have had many days (and even weeks) off, an easy pace of 2 pages every “school” day has easily finished the program for us in just about 10 months.  I wasn’t consciously pacing it that way AT ALL, but it’s very convenient and fun that it worked out precisely within that “academic-year” time period.

It must be SO encouraging for kids to see that they’re making progress in a real way throughout the year – not just being arbitrarily lifted from one grade to another every June.  Like a few months ago, when we finished Book 2 of Explode the Code.  Or how she knows we’re nearly at the end of the Grade One Handwriting Without Tears book.  For both of these series, and for math, she likes seeing the new books waiting for when she’s ready.

Of course, the content of the texts is somewhat arbitrary (hey, let’s make a super-short book so kids can “graduate” every few weeks!), but in this case, I have no problem congratulating her on completing our province’s requirements for Grade One math.

Before we start the JUMP Math 2.1 workbook, we’ll keep doing our Daily Word Problems (I print them out from the Evan-Moor site with my TeacherFileBox membership), but I want to jump back into Miquon now that her handwriting is so much better.  I think it will be a nice, relaxing change of pace for a few weeks, plus, I hope to get Gavriel Zev interested in working with the Cuisenaire rods more, too.  I figure we can cover a big chunk of the Miquon orange and red books, not with the goal of finishing them, but just to take some time having fun with math in a totally different way than we have for the last little while.

When there’s time.  So strange:  now that we’re starting to get into the swing of a normal fall session of classes and things after a rocky start due to holidays, I have realized that the fall session of everything pretty much ENDS at the end of November.  I only have two signing (ASL) classes left; in fact, only one – the last class is the final exam.

Does life always move this quickly???