The Lesson of the Stroller

(with thanks to Phyllis Sommer’s Ima on and off the Bima for the “Blog Elul” button and meme, which I have not yet participated because I thought I had nothing to say)

My friend Sara just wrote an interesting post about strollers, and running after her toddler on Shabbos.

Her post reminded me – tangentially – of the olden days, before Toronto got its current eiruv.  I started to write it in her comments, but realized (for once) that my thoughts were totally irrelevant.  “Get your own blog,” I told myself.  But then I realized, “Wait a minute.  I HAVE my own blog.  And this is what it’s for – my random dull reminiscences of bygone eras.”  “Okay, then,” I told myself.  “Why not write it there?”

When YM was a baby, there was no eiruv in Toronto, so young mamas just didn't go out on Shabbos.  By the time we moved to Calgary, also with no eiruv, he was walking, so on Yom Kippur I decided to walk to shul.  The shul was RIGHT across the street.  Literally, across a stoplight and then walk to the end of the plaza - maybe 6 store-widths?

Here are the townhouses where we lived – literally across the street:

Did I mention that I was pregnant at the time?  Not hugely so, but enough that my back and hips hurt ALL the time.  I hadn’t been able to pick YM up in a while, but luckily, he walked well at 10 months.  Smart boy!

This being Yom Kippur, it was a bit before his first birthday.  (which always comes – don’t take his word for this, because he’s planning on celebrating it on September 30th this year - right after Sukkos)

Naturally, he crawled down the stairs of our townhouse, and with the promise of seeing Tatty, toddled eagerly all the way to shul.  We stayed for an hour or two until I thought he was starting to get tuckered out… and then I tried to head for home.

See that sidewalk in front of the plaza???  It turns out – sort of like Zeno’s paradox – that with a crying baby, who does not want to walk, and no eiruv to carry him in, it is infinitely long.  I coaxed and sang and held his hand and cajoled and dragged him along, but by the time we were halfway home (the bus stop in the above picture), he wasn’t going anywhere and we were both in tears.  That was maybe 45 minutes, but it felt like MUCH longer.

A woman at the bus stop asked if I needed help… but I said no.  I wasn’t going to ask her to carry him the rest of the way home, nor could I figure out how to explain to her why I couldn’t.

You can actually walk “daled amos” (4 cubits, about 6 feet) while carrying, even with no eiruv.  By this time, though, my back was in pain, and I didn’t think I could even carry him “bais amos” (2 cubits) without breaking it entirely.

Mercifully, I forget how we got across the street… what matters is we DID get across, DID get home, or at least in the front door.   I sat on the bottom step and cried for a while as YM, no longer tired and cranky at all, happily crawled up the stairs again and went to play.

(the journey that took us an hour)

Since this is a thoughtful blog, or I like to think so, I wonder what the greater POINT is of this episode.  What is its meaning in terms of my life as a Jew?

Is it, as some might say, just an example of how ridiculous and legalistic this religion can be, to not allow a weary mother and her baby a quick and easy way to get to shul on the holiest day of the year?  Surely that cannot be the intention of the law!  I can imagine someone shrugging in disgust and saying something like, “that’s exactly why I left frumkeit.”

But I didn’t leave frumkeit, so clearly, it isn’t that for me.  I now see it as one of those amazing “teachable moments” that are so painful in the moment:  my job, as a parent, was to NOT expect my child to do something that was clearly beyond him.  I figured he had the motor skills, but in my desire to go to shul, to not be stuck alone at home, I didn’t really look clearly at his other skills to make good and sure he was ready for what I was about to ask of him.  It’s a worthwhile lesson.

Many times, since then, I have been disappointed or angry at how my kids have behaved, and only later – when the red smokescreen of fury passed – realized it’s because I was asking more of them than they could do just yet.  And usually, that happened when I wanted something so much I stopped taking their abilities into consideration.  More than WANTING, the worst came when I told myself I SHOULD get to do something – I had a right.  It blinded me.

Like going to shul on Yom Kippur – of course I should go; I had a right to go.  Or one disastrous Purim when I brought two little kids to a megillah reading in a shul that was very, very insistent on absolute silence.

I was a single parent; my life was terrible, I couldn’t afford a babysitter – and I had a right (a religious obligation!!!) to hear the megillah.  It’s not like I was sneaking out to a bar.  But the kids misbehaved anyway; I had WAAAAay overestimated both their ability to sit without clacking the greggars and the shul’s ability to tolerate my children, and we got shushed out of the place.

My friend’s post about strollers isn’t just about strollers – it’s about being patient, about living life at your kids’ speed.  About letting kids walk even when they meander, even when it’s inconvenient.  And I guess, so is mine.  Looking good and long and honestly at your kids and knowing their “speed” – their strengths and their true limitations.

Through my kids, I’ve also learned about my own limitations… and about finding solutions that really work.  Like that Purim.  We left the shul in disgrace and headed to a friend’s house who lived down the street.  We were locked out, so the kids threw snowballs for a while until my friends came home from shul.  Then, my friend babysat while I went to the second megillah reading, sans kids.

This is a lesson about kids, but also, perhaps, a lesson in emunah:  If it’s a NEED, Hashem will take care of it – somehow.  If it’s not happening, if there’s honestly no way to make it happen, then maybe it’s not really a need; maybe it’s not a right… maybe it’s just a WANT. 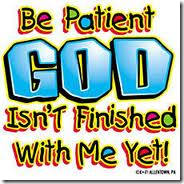 Have I learned this lesson???  Not particularly well.  I know it, but something of this magnitude takes years, a lifetime, to sink in.  Like the iron-on T-shirts you used to buy at the mall kiosks said:  “Be patient, God isn’t finished with me yet.”

It’s a good time of year to work on this, with His help.   May we all emerge, famished slightly more “finished,” in two weeks’ time.