Dear Whatever Morons Run Downsview Park (I didn’t write that!):

The City of Toronto usually holds its Winterfest downtown.  This year, because that Winterfest isn't taking place (due to renovations at Nathan Phillips Square?), I was looking forward to the Winterfest at Downsview Park… until I realized it's only being held on a Saturday.

Located at the heart of Toronto's Jewish community, Downsview Park really ought to consider local participants when planning "public" events such as this one.  Many Jewish families would probably love to attend this event, but because of the Jewish Sabbath, which lasts until sundown on Saturday, that won't be possible. 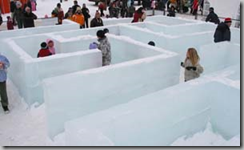 It is easy enough to either hold a two-day event, or to hold an event only on Sunday, in order that everyone from the surrounding community may participate.

As it is, I believe you have already sent a very clear message to your Jewish neighbours.