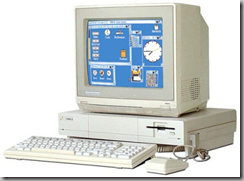 Have I mentioned how much I hate Microsoft???  But no, I’m not a Mac person.  I got spoiled early on by non-Microsoft OS’s, and have never gotten over the death of the Amiga.  So there.

(Amiga at left is circa 1985, when Windows was barely capable of whisking a mouse around the screen and “nesting” windows – windows within windows – was still a pipe dream on the PC)

This post was originally titled “two stupid computer problems” but “unintuitive” is more accurate than “stupid,” and “Microsoft” is the source of the problem… not computers in general, just the way they’ve ruined them for the world.

Potpal (our ThinkPad T42) has a built-in microphone.  Cool, right?  For all the time we’ve had the laptop (about 6 months), the microphone has been silent, but a week ago. it mysteriously, magically turned itself on.  Not a problem unless you want to watch TV on the computer (which is all I use it for), or listen to music – any kind of audio creates the most screechy feedback through the built-in mic.

Or maybe you just don’t WANT the scratching sound of your mouse and your own breathing amplified in the background as you work.  It’s kind of creepy – like somebody is watching you work and literally breathing down your neck.

So I decided to turn it off.  But how???  I consider myself fairly adept, technically, but could not find any kind of button, switch, checkbox or anything to turn off the mic.  Okay, I found a checkbox, I checked it, and still, it did not turn off.

Finally, after days of Google searching, I found the following literally buried in an unrelated forum.

Are you using Vista or XP, to turn of the internal mic in vista, right click the volume icon and select playback devices highlight speakers and select properties, then go to levels and mute the microphone. (in playback NOT in recording)

So I found the checkbox, and checked it.  Unintuitive Microsoft Problem #1:  Solved!

I use my camera a lot.  Potksed (our aging Dell desktop computer) has a USB cable pretty much welded to one of the fast front ports to plug into my camera.

Up until a few weeks ago, when I plugged in the camera, a popup would come up asking me what I wanted to do with the pictures.  Okay, the box was annoying because I always want to do the SAME thing – get them off the camera and stick them in the proper folder on the hard drive.  I wished I could train it to do that without asking me, but by and large, it was a pretty easy process.

But then we had our virus problem two months ago, and then I fixed the virus problem myself (yaaay!), with the help of the geeks over at bleepingcomputer.com.

Yay – the virus was gone!  But, boo, the computer no longer recognized my camera!  I could plug it in, and it was there, but for security reasons, Autoplay was disabled and I couldn’t get it back.  That meant I had to manually go into the camera and haul the pictures onto my hard drive.  It sounds harder than it is – it’s just a few extra clicks, not actual physical labour – but it was starting to make me crazy.

I tried TweakUI, my weapon of first defense, which has an autoplay-fixing feature.  No luck. 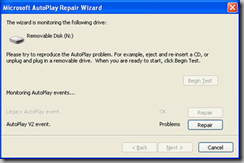 Tried a million Google searches.  And on the million-and-oneth, I found the solution.  Turns out Microsoft makes an Autoplay fixer.  A special program to fix Autoplay when it goes wonky.

Nothing about it when I tried my computer’s help, of course; no, as with everything else, I had to find it in an out-of-the-way nook of the Internet that I had never visited before.

Downloaded and ran the Autoplay fixer, rebooted, and whaddya know…?  It fixed my Autoplay!

Now, should I be grateful to Microsoft for making both of these solutions available in the first place?

Or should I feel resentful that the solutions – to those many niggling problems – are so very, very counterintuitive that 95% of computer users would not bother trying to solve them?  Or would give up two weeks into the process, bang their heads on their keyboards, and despair of ever getting the computer back the way they had it – ever again?

I have visited enough people’s homes, tinkered on their computers enough, to see how easily people, especially older people and technophobes, are intimidated into accepting whatever the computer “wants,” rather than forcing the computer to work the way they want it to work.

Last week, and I guess this is a third Unintuitive Microsoft Problem for the price of two, I went to somebody’s home to fix her computer:  she said on the phone it was losing her emails.

Now, this is a woman in her 70s, who is not always bright and swift on the computer.  I honestly figured maybe she was leaning on the Delete key without realizing it, or her hand slipped while she was  moving the emails to another folder and they got deleted instead.  It happens.

So I sat down and found some of her missing emails for her and told her the whole thing was fine and sent her a test email just to make sure… and then it vanished!  Gone from her Inbox, and I knew I hadn’t deleted it by accident.  Sent another, and it happened again.  Huh???

And then I remembered – the same thing happened to me a while ago, and half my emails mysteriously vanished.  Outlook Express (in Vista, it’s called Windows Mail, but it’s basically the same program) has this “feature”… well, I went into her email settings, and sure enough, there it was:  the “Hide read messages” option was checked.

Yup, there is an option to have the computer HIDE your messages from you.  So you don’t have to see them!  Why not delete them?  I guess in case you need them someday.  Why not move them to another folder, as I show all my students to do to keep their Inbox clean?  I honestly don’t know.

So I unchecked the check box, and sure enough, all her hidden messages came tumbling back into her Inbox (most were spam – she hadn’t checked her email in about a year).

Now, she would NEVER in a million years have found this checkbox for herself.  This is a person far too timid to “poke around in the menus” like I tell everybody to do.  Probably, she is somebody who will always need a lot of help to use a computer, which is fine.  But even younger people, if they are at all suspicious or fearful of technology, might not suspect that such a diabolical feature exists – or have the knowledge and skill to actually find the solution.

I know Microsoft has far surpassed the Amiga by now in almost every area.  But I am thinking we need another paradigm – a way of designing computers that are complex yet intuitive.

There must be a way.  And as I said before, I don’t believe the Mac is or ever will be that way. 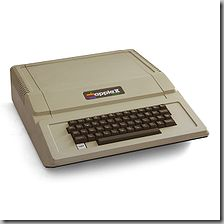 (For what it’s worth, I was an Apple fan way back in the late 1970s, but quickly switched loyalties to the Commodore camp.  The first few iterations of the Mac were hopelessly condescending – rather irritating after the vast freedoms of the Amiga.)

Computer reminiscing sure is fun!

We sure are spoiled with the amazing computers we have these days… especially when I think about how amazing our family’s first technological venture was at the time:  my father’s calculator.

In the early 1970s, it probably looked a lot like this (yes, it, too was a Commodore; even then, I felt tremendous brand loyalty!).

With no abilities beyond basic math operations (probably not even a memory feature), and a very basic LED screen, it was still enough of a thrilling rarity that we spent as much time as he’d let us playing around with it.

Later, we graduated to such high-tech wonders as the “Pocket” Simon game – perfect for driving parents nutso on long car trips!  (and who has a pocket that can hold this thing???).  And eventually, my brother bought his own computer – a Commodore (yes, again!) Vic-20, with the amazing 2K superexpander that let you type in up programs to 200 kilobytes – yes, that’s KILO, as in one THOUSAND whole bytes! of program.  For reference sake, each character you type is one BYTE – meaning that you could type 2000 characters before running out of memory.  For comparison’s sake, this post is now around 7000 characters… 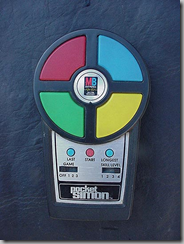 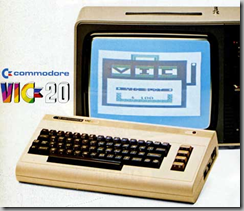 … which is altogether too much reminiscing!

But every once in a while I need to air out both my technical stuff and my extreme old age in the world of computers.  So there you go – there it is.

The history of computers, from idyllic (if crude) past, to annoying (if powerful) present.  And the future?  Who knows!