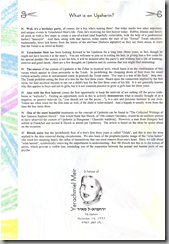 I wrote most of this almost ten years ago, in response to a number of questions on the soc.culture.jewish.parenting usenet group (remember those??). Since upsherin is mostly a chassidic custom, many people who are thinking about this beautiful custom don’t have anybody to ask.

I was actually searching my hard drive for the upsherin program/handout I wrote for YM’s – 13 years ago this fall. Still looking for that, but in the meantime, if you have any upsherin-related questions, please feel free to ask them in the Comments section, below!

There are actually three sections here. The first part is a schedule of what we did for YM’s upsherin; next is a bunch of questions I replied to, from one or more scjp members. Finally, the third part is the upsherin program, which I never did find on the hard drive, but actually still had a hard copy floating around.

Keep in mind that I’m not a rabbi, or even a rav or competent mashpiah. If you’re not sure if this custom is for you, please read more, ask questions, and use every resource you can get your hands on to decide!

Funny… this fall’s upsherin, iy”h will come just a couple of weeks before the 16th birthday of my last little upsherin yingele.

PART 1: The Order of the Day

Thanks for writing.. I can really relate to all the questions that come up when making an upsherin in a community where the practice isn't commonplace. Customs vary, so my top suggestion would be to relax and figure out what works for you and your little guy.

Here's what we (okay, ME; I'm a divorced mommy) [NOTE: at the time, I was!] did for YM, which I thought worked out very well:

MORNING:
- me & YM & little sister and a couple of close relatives took him to a rebbe (more on this later)
- boys in classroom greeted YM
- rebbe read alef-bais with boy, with a special letter chart he had already made up, covered in a sheet of plastic, with drops of honey over each letter. He gave YM a lollipop, which he "dipped" on each letter as he said it, then licked off
- boys in classroom may have said more to YM or sung something for him... I kind of draw a blank here
- rebbe took scissors and took the first snip of hair before handing him back to my father -- the only Yiddish speaker in our group!

AFTERNOON:
- party at my parents' house
- started with hair-cutting, so we could get it done before YM got crabby
- proud Bubby took pictures of everybody's turn to cut
- all friends, relatives, etc., took turns cutting -- we were helped here by "My Upsherin Book," which prepares boys for this experience a little
- then we had light refreshments, cake etc.
- proud Bubby discovers camera was empty the whole time... GROAN! Gam zu l'tovah! :-))

Note that all of this took place almost two months after YM's third birthday. He was born two days after Sukkos, and that was the soonest I could get my act together. The exact day isn't as important as the fact that he knows it's going to happen sometime soon.

Umm... so what other wisdom can I offer?

>1) We are considering sending our son to a rebbis classroom of
>kindergartners for the ceremony - how does this work exactly? Do we go to
>the rebbi BEFORE the hair is cut?

We did, but then let the rebbe do the first cut, so the idea of learning Torah and being a "big boy" were totally intertwined.

>2) Do we have a grand party right after the hair is cut by the rebbi?

Umm... I would nix the grand party and go for a "kids' party". Keeping it light and fun will make it more meaningful to the kid himself, I suspect. Especially if you tell him over and over, as I did, that it's his last big party until his Bar Mitzvah! :-)
(I have since broken my "word"...)

>3) Do we need to bring anything for the rebbi?

We didn't. The rebbe knew his role very well, and I figure any yeshiva-type school should be prepared for this, especially if they have a lot of chassidisch kids, or if the rebbe himself is (this one was, though the yeshiva itself wasn't). He had his little alef-bais chart, lollipop, etc, all ready. I think it was better to let him do his thing, because he had it all scripted out with the boys in his class, and they knew their part. If we'd tried to butt in with our own equipment, I think it would have thrown them off -- the "big boys" were kindergartners, all of five years old!!!

Again, we didn't; I was planning to enroll YM at the school the following year, so I just figured this was part of the package. They may not ask, especially if you're planning to send your son there. But thinking back, it probably would have been a good thing if we'd made a donation to the school. At the moment, I still owe them tuition money from five years ago, and I'm still scrambling to pay both kids' current year's tuition, so this is kind of a lower priority. But someday, I think I'd like to send them something for that rebbe's great chessed.

No seudas mitzvah as far as I know; this is minhag, not halacha, so it's not exactly a "mitzvah." (Consult your local Halachic authority.) Naturally, if you make a siyum (and luckily, you've got plenty of time to get started learning!), you can always arrange to have one. However, even if you decide not to, the difference can be virtually indistinguishable to your guests and your little guy. Have a big challah and a nice, rowdy "bentsching"; make a fuss.

>7) Do I have the party on the same day as the hair cut? Or do I wait for my son to go to a barber to fix up his hair?

NO! Blasphemy! !! There is nothing so cute or wonderful as a little guy on his "throne" with his hair all chopped up -- I'm not kidding! Share the precious final moments of his babyhood with everybody whose life he's ever touched.

Hmm... I dunno. Maybe one of those home haircutting kits for fixing the scruffy job everybody will be doing of his hair? Seriously, I invested in one, and even though YM is now at a modern Orthodox day school, he still gets a yeshiva-boy haircut. It's short; it's manageable, and it keeps the yarmulke on. Actually, he loves it, too; he usually begs me to leave his peyos even longer[NOTE: not anymore; he’s been going to a barber for 3 or 4 years now!]! I figure I've saved over $100 on haircuts for him so far, in the five years since his upsherin. Of course, his sister asked me to do her hair with "the machine" one time... and regretted it for a long while afterwards. As a plus, you could have your wife do your hair, too! And if she wears a sheitel, you could do hers -- save the whole family a bundle! (I am just kidding, of course...)

>9) Is there a "seder hayom" or a special siddur or sefer I need to read / learn beforehand?

I don't think there's anything special that parents learn or read before the event. From other upsherins I've been to, the father says a brief d'var Torah, frequently interrupted by kids running around, usually with some tie-in to parashas hashavua, the kid's personality, significant family members... basically, anything you were in too much of a daze to remember to include in your speech at his bris!!!

Finally, good luck, and mazel tov... though you've got some time to go before the big day. May his ponytail elastics be sturdy and his kippah clips iron-clad.

All bullet points in this program were originally scissors – cute, yes? This has been scanned and OCR’d, then hastily reformatted for this post – all errors are the software’s, not mine (great free web OCR here). Feel free to plagiarize this freely; how do you think I put it together in the first place. It’s great how much information there is on the Internet now. At the time of YM’s, there were literally three pages with relevant information. Three!

Here are a few thoughts on Upsherin and its customs that you might find interesting: 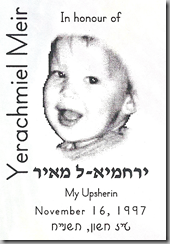