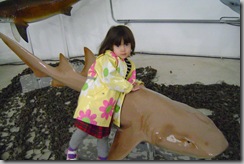 Free Members-Only Preview of the Zoo’s new limited-time-only Stingray Bay exhibit.  It’s basically a huge aircraft-type hangar set up with a long shallow pool where you can see stingrays swimming around.  Both big kids came along reluctantly, but had the best time.  Highly recommended. 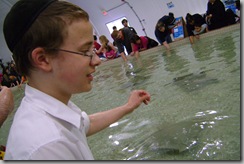 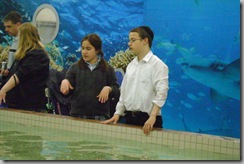 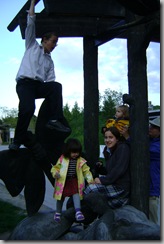 Elisheva told us not to climb here.  She is probably saying it right in this very picture.  They are fiberglass animals, so I can see why they wouldn’t want you to climb on them, but there is NO SIGNAGE, I swear.  Anyway, a zoo official came along just seconds later to kick us off.

Actually, in the picture above where Naomi Rivka is posing with the fiberglass shark, there is similarly no signage but at least the animals look fragile (in the one here, they are outdoors and made to look like real stone or concrete).

She kept trying to climb on the shark and I said no.  Finally, she actually did mount it and the whole thing shifted.  I thought it was going to fall with her on it.  I told the guard watching that the model sharks really did need a “no climbing” sign, because the first thing doofuses like me do when we see a pretty animal is pose our children with it.

And finally, now that I have complained about Garlic Mustard taking over the woodlands of southern Ontario, I see it everywhere I go – on Monday morning in our local Cedarvale Ravine and then in the pristine and generally well-kept woodsy areas of the zoo. 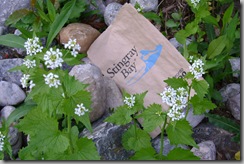 Monday SUPPER:  Chili with corn bread.  Done and over done, but I needed something fast, easy, reliable so we could make it to the zoo thing by 7:00 (we did!  we were on time!  for once!)

Oooh!  Picked up some huge gorgeous Freecycle hostas!  Pics to come after a rain or two – they’re settling in in the backyard right now.

I’m sure Ted took pictures, but I didn’t.  We went to Earl Bales for a BBQ / Bonfire, hosted by the JRCC.  Not as good as the Chabad-Israeli Centre one last year at G. Ross Lord.  That one had live entertainment, jugglers, acrobats and a couple of bouncy things, along with an only slightly out-of-control scene around the huge roaring bonfire.

This was more subdued by far.  They did give free marshmallows on sticks for the kiddies, but then the fire enforcing guy wouldn’t let anybody close enough to get the marshmallow any more than slightly lukewarm.

Also, because it’s Chabad-run, all the buns were mezonos bread:  perfect unless you don’t hold by mezonos bread.

Me:  Do you have anywhere we can wash?
Guy giving hot dogs and other meat units: Don't worry, it's mezonos.
Me: We don't hold by mezonos bread.
GGHDAOMU: Oh. I don't know what you can do, then.
Me: Do you have a water bottle, a cup I can take to the bathroom to fill with water, anything? GGHDAOMU: You can buy a water bottle.
Me: But that would require going back in line for tickets, buying a ticket for a water bottle, then coming back here and standing in line to get the water bottle. And how much do they cost, anyway?
GGHDAOMU: [way disinterested by now] I think $1.
Me: Aargh.

Ted solved the problem, though: he'd bought two cokes and a ginger ale, so I went back to the GGHDAOMU and traded one of the cokes for a water bottle and we washed with that. Looked askance at the coke, but finally did accept it. Phew!

And no, thanks for asking, I didn’t spot any garlic mustard at Earl Bales Park… but then, I wasn’t really looking.

(Elisheva stayed home and made her own supper of noodles; YM had a separate bbq for his school, also at Earl Bales)

Just the usual… catching up on laundry (I feel like the week is just beginning, laundry-wise, because I haven’t done any yet this week).  Went to a park with some other mamas from the area.  Typical stay-home mom stuff that I feel like I never get to do.

Potted up 24 tomatoes which overall are in lousy shape considering they were planted on March 23rd.  The replacements for the two missing rows that never did turn up were seeded on April 18th and look only a bit smaller than the older ones.  Stupid WalMart potting soil.  I regretted it a minute after I sowed the seeds, and will use proper peaty seed-starting stuff from now on, I promise.

Tired, grouchy kids had a nice, long nap – yay!  So I got four tomatoes planted in the new SFG bed and used the three “spare” squares to hold peppers – one jalapeno, one “MiniMix” bell pepper, and in between, my comparatively huge overwintered bell pepper.

I love the fact that peppers are perennial… I hope to keep them for years, and maybe even find a special, delicious and beautiful one I can cherish and save, as Gayla Trail of You Grow Girl has done for a few winters.

A ton of other miscellaneous garden tasks:  squeezed a few more coleus into the front beds; I think they’re at their maximum capacity now, and the last two are off the kitchen windowsill… including a beautiful tiny sprig that I pilfered from I-won’t-say-where and rooted in a tiny l’chaim cup.  It’s gorgeous, though.  If it survives in its new pot, I’ll post pictures soon.

Oh – planted out some of the wintersown seedlings:  columbines, milkweeds.  More on this another time; I’ve already finished this post and I’m tired now.

After-nap flurry of Wednesday activity:  Naomi Rivka swim, Gavriel Zev swim, Elisheva Chaya’s art class, Ted’s pottery class, Ted’s brother came over for supper, Yerachmiel Meir’s usual homework chaos and nonsense.   A little crying over bedtime but generally everyone did okay.  I really must start brushing Naomi Rivka’s teeth when it’s my turn to bedtime them solo… I just get so tired and lazy we go straight from nummies to sleep.

Speaking of which, and speaking of parenting guilt trips, this was the first morning I consciously told Naomi Rivka she could not have nummies.  I later filled her in on the rule, which I have come to peace with for myself and feel is appropriate her level:  she can have nummies when she’s going to sleep, but not when she wakes up.

When she wakes up, she is big enough that she can have food:  breakfast, in the morning, or a snack, in the afternoon.  She hasn’t had after-nap nummies in a very long time anyway, but the morning one was hard.  I really must cuddle her or do something special with her to make up for the missing closeness-time.

But she’s 4-plus.  I think it’s time.  Not to wean, but to start introducing the idea that four is old enough to do without nummies for a while.  That nummies is for babies and little children, more than for big girls who put on their own kallah dress or put all their own mentschies to sleep inside shoes. 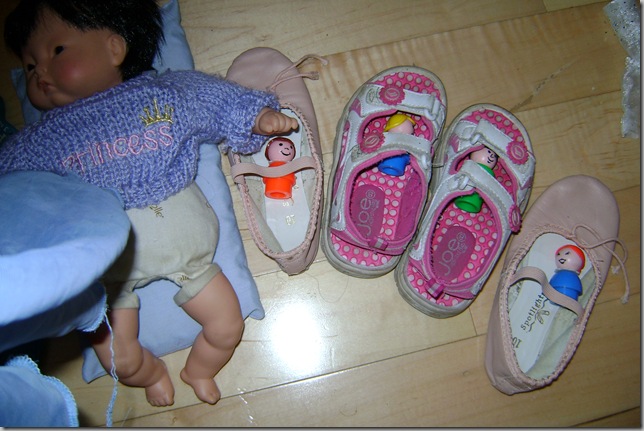 Superstore chicken!  And we were going to do tinned potatoes but we had no tins of potatoes, so Ted valiantly scrubbed and prepped a bag of regular potatoes which turned out not only delicious but also organic.  The non-organic (inorganic?) tinned potatoes really are a cheat if I have decided that organic is important when it comes to potatoes.  Period.

I did a nice stir-fry on the side:  onions, red peppers, broccoli, celery.  Not cordon bleu, but it’s nice at the end of a busy day to have something colourful alongside all the potatoey chickeny stuff.

And now – off to fold the abovementioned laundry and maybe watch a little telly… ER, of course:  there’s never anything else on!!!