Every day it's gettin' better... 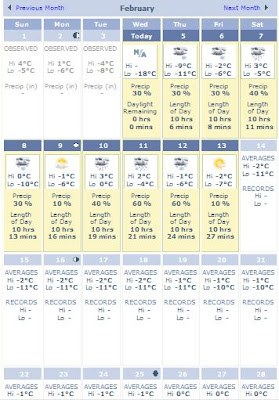 The thing I keep saying about February is that every week the average high is warmer than the week before, on average, by 1 degree.

If you look at a graph, February is just about the coldest month of the year.
But to me, it's one of the most hopeful months as well. 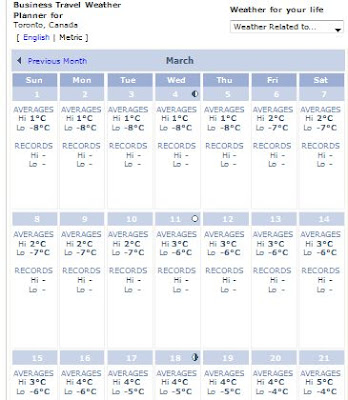 Every single day of March, the average high is above zero.
Knowing that's coming, I think I can almost, almost make it through.

Of course, today was so crazy cold it was something like minus-26 with windchill and my friend Dini called me up to say she took her younger kids skating - at an outdoor rink! Crazy, crazy. She described herself as the craziest person in Toronto (okay, that was before she asked about my brother).

She absolutely loves this weather. It has nothing to do with putting on a brave face. If the temperature goes up above zero, she starts schvitzing. Below zero, she's okay, but always, the colder, the better as far as she's concerned.

She has a baby just a few weeks younger than Gavriel Zev. While they were skating, she says she thought he was sleeping in his stroller. But apparently, he wasn't sleeping... just buried under so many layers of blankets and plastic covers and everything that she couldn't tell he was awake.

It is reassuring to know her family dresses for the weather. :-)

Unlike, say, my older son, who says "it isn't cold" if the temperature is anywhere above minus-twenty. He also, the other day, announced that it wasn't night. Very annoying... I think he's discovered how much it gets on our nerves just to contradict the most blatant, obvious facts. You wouldn't think it would be annoying, either, because we're so confident we're right - like 100% sure. BUT... it appears to be one of the "buttons", both for me and for Ted.

Speaking of buttons, well, not really, I felt something caught between my teeth, rubbing towards the back of my tongue and tugged at it thinking it was a "thread" of chicken... but no, it was NOT a thread of chicken (it does kind of separate into strands which can get stuck in your teeth), it was a thread of THREAD. Like stitches. Ew. I feel woozy. Really; mighty disgusting.

And with that gruesome thought - G'nite!