So I've become addicted to Google ImageLabeler, a "game" where you 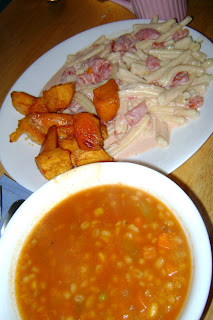 and a partner team up to guess labels for various images culled from the Internet. You're both shown the same picture at the same time and sit typing in labels - mostly identifying what's in the picture.

For this one at left, for example, I might type food or supper or dinner. Meanwhile, my partner, somewhere else in the world, would be guessing soup and yams and plate. Then, finally, he or she types food (my very first guess, of course)... and it's a match! I'm such a fast typist & good speller that it's easy to come up with lists of words very quickly.

Oh, you also get points for each match - more points if it's a more obscure word... hardly any if it's something dumb like man or picture or green. So now that I've been at it a while, I've been starting out with the obscure words... but then, if you get paired with a novice, they just type man and stop, waiting for you to come up with that low-point-value word. The last person I was paired with simply couldn't spell / type at all, and guessed words like pcture.

One final rule is that, as in the game Taboo, there are sometimes words you're not allowed to use. So it may be a classic car-ad shot of a car, but you aren't allowed to use the word car, so you must move on to describe the road, headlights, windshield, driver, etc. The off-limits words are, I assume, past matches stored from when other players were shown that image.

What players get out of it is a score and a fairly mild addiction, plus the chance to be ranked among the day's best or all-time top contributors. What Google gets out of it are increasingly accurate descriptions of images, easily one of hardest things for any search engine to track and rank. So invest heavily in Google stock, people... what they've discovered is nothing short of a miracle: a way to recruit hundreds of people at any given moment, basically working 24/7/365, to do the grunt-work of labelling every image in Google's database. 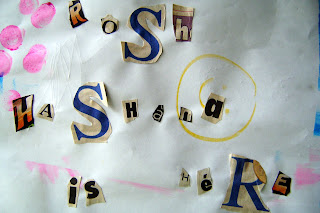 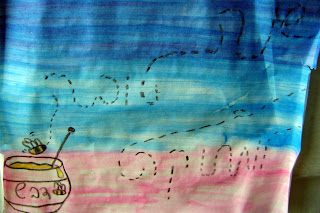 Like these posters? I was thinking of pulling them down from the door, but wanted to memorialize them somehow before I did. Elisheva made both. I especially like the French accents on the letters.

~ Fake crab / creamed corn / shiitake / egg drop soup
~ Stir fried whatever we have around in a homemade stir fry sauce
~ Rice
~ Hmm... dunno what else. Maybe that pareve almond tofu dessert, for dessert! Or a milkshake.

We are down to the wire on the belly-button-surgery weight loss so I'm try to be very disciplined in having only one full meal a day besides the icky diet bars. Haven't weighed myself in a couple of weeks, so I should probably see if I'm on track. I have to be down to 129 by December 8th.

My father's in the hospital again, since Shabbos. He sounds like he's having trouble breathing, on top of everything else which my mother says includes kidneys and heart. He had a cardiology clinic appointment at noon and she called me to take him from St Mike's to the General because he was crazily insisting that he had to go - even though he has IVs in and can barely get up at all. She doesn't seem to like or trust the St Mike's Cardiology people and they very much trust Dr. Ross, his General cardiologist. Oh, and she had to be somewhere else at 10 for an appointment and didn't know if she could get downtown in time to take him herself.

SO... I said I would take him, called Judy (a neighbour) to take care of the kids, and called St Mike's to let them know I was coming in an hour, and also - at my mother's suggestion - called the General to ask them to call me about whether it was urgent that he attend his clinic appointment against the advice of his oncologists. Well, he called fifteen minutes later to tell me Mommy was crazy and that he was just not going to the cardiology clinic. Fine.

So I cancelled Judy, and when Mommy called after her appointment, I told her everything. She said she was going home first and then down to St Mike's to see Daddy. Then life got busy and three hours later, I arrived home to Daddy calling and asking where Mommy was... aargh. I think we should break down and get cellphones, if only for the next few months. Two cellphones; they can afford two, although I guess he couldn't use it in the hospital.

I think I will go down after supper for a very short visit - he doesn't sound like he'll be home anytime soon. Hope we don't have to talk about money / rent / taxes / mortgage etc. We have none of the former and too much of the latter. When he was first diagnosed, I really thought I didn't have many regrets and had a good, healthy relationship with my father. It is sad that I now feel like I'm avoiding him because we owe him so much money on this damn house and car etc. Who visits their creditors in the hospital???