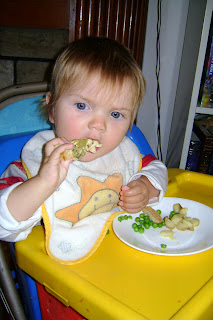 At the Children's Garden tonight, it was getting dark too quickly to have storytime and I was cutting up the watermelon for Claire, quite distracted by the thousands of annoying mosquitos swarming around my head when all of a sudden Naomi started screaming & crying. I went over to find out what was wrong with her, and felt a shudden, sharp bite on my arm... and then all hell broke loose as every single child began screaming and crying.

Every SINGLE one of the dozen or so children there burst out in screams and tears, erupting from the garden, some shedding clothes as they went.

It was a wasp hive, apparently lurking in the composter, that had gotten both angry at having weeds dumped on top of them throughout the evening and perhaps riled up by the scent of the watermelon circulating in the garden.

The wasps embedded themselves in some kids' clothing and a couple of adults' hair. Claire is very allergic to wasps... luckily, she didn't get bitten.

And by some weird miracle that nobody else seems to think is amazing, NONE of the babies got bitten: Daniel, Gavriel Zev, and there were even two newborns there, they all got out without a single bite. I mean, almost every single person got bitten except them. Maybe there is some smell that babies have that wasps don't like? Maybe we can put it in a bottle for next week?

Ha ha... as if Naomi's going back next week without a fight. She's been scared to go out at night for weeks because of the bloody mosquitos and now THIS...

On top of which, she already has a bloody, bruised lip from tripping and falling at Mrs ViKi's, just at the moment that another mother was teaching her the rule about NOT RUNNING INDOORS. Which, to me, is a pretty arbitrary rule, because you're allowed to run outdoors even though there are harder surfaces and more tripping hazards.

Ted's mother called him this evening to tell him his brother was in the hospital with chest pain. And the way everything's going this week - oh, Nanny's in the hospital again - I naturally assumed the worst. But then it turns out he was only there for a couple of hours this morning, and he's been out for hours and just didn't tell his parents because he didn't tell them he was AT the hospital in the first place. Somebody must have leaked the news to them in the morning, when he went in, and then forgot to unleak it when he left in perfect health.

He's going down there this weekend with Naomi - as long as she stays healthy. It's his nephew's wedding... don't ask me which nephew. I guess it's my nephew's wedding also, but a) we can't afford another Family Trip, and b) the big kids have school on Friday and YM has school on Sunday. I think it will be a wonderful adventure for Naomi to go on a trip alone with her Abba... as long as they can find a way to make it Shabbos, even in Granny & Grandpa's very non-Shabbosdik house.

I told Ted it's okay for him to keep Shabbos alone when it's just him, but when there are kids involved, you really have to make it FEEL like Shabbos. For one thing, I think she'd feel totally ripped off without the entire Shabbos experience. He's planning to walk with her to a park. The no-eruv thing will be weird for both of them. Well, okay, the whole experience will be weird for both of them.

I did wonder briefly about exposing Naomi to their perpetually smoky house, but a) they've both cut down quite a bit, I think... the house was very tolerable when we were there in July. And also, b) it's only two bloody days... and the possible health repercussions of two days of secondhand smoke are far, FAR outweighed by the benefit of her spending time with Granny and Grandpa.

Tomorrow I must round up Granny-selected outfits to send along with Naomi so Granny actually gets to see the clothes she picks out, not just pay the bills for them.

Oh - impulse decision I may regret: in the car on the way home from shopping today, we were listening to Yom Tov music on a CD and I told Naomi she could have a Sukkah Party and invite her friends. We made eight invitations for the Sunday of Chol Hamoed and delivered them all today. She is over the moon with excitement, and kept saying, "we have to invite MADELEINE, MADELEINE, MADELEINE."

I suspect Madeleine has become a somewhat exotic, unknown quantity now that she's a great, big kindergartener and not just another 3-year-old. She is just another 3-year-old, for another month, I think, but she's ALSO a kindergartener and that makes her very, very mature in Naomi's eyes. She also said we could invite Mrs. Duke from down the street and Claire from the garden, plus Bubby and Zeidy. So of the 8 invitations, only five went to actual children: Anthony, Madeleine (of course!), Ma'ayan, Jacob down the street, and Yakira. I will also mention it to the parents of Eliyahu, another boy her age who lives nearby.

Anthony & Madeleine aren't Jewish and I was somewhat terse with both mamas; they both asked me what a Sukkah Party was and I admit, I didn't feel like explaining. Partially, it is annoyance that everybody knows what Chanukah is and nobody ever asks about any other holidays... although then I was too annoyed to answer when they finally did ask about Sukkos. I feel like slapping everybody and saying, "this holiday that our government has the chutzpah to schedule an election for is WAY more important than Chanukah ever was." Baah. Maybe I'm just grumpy today. And inarticulate, too...

I will explain better tomorrow. :-)

P.S. Elisheva's going to Ricki's for Shabbos, and with Ted & Naomi away, I suggested that it might be a good week for YM to sleep over at Elijah's house. I've already invited Sara, and my secret fantasy is a just-us-two dinner for me and her (well, the baby can stay up for kiddush and a bit), with a bit of talk and then she leaves and lets me get to the serious business of READING into the wee, wee hours!!!