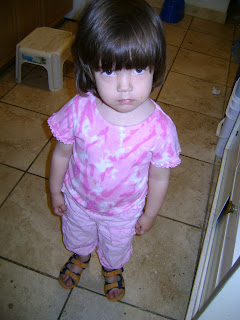 Probably mirrors the mood / attitude she's getting from me. But I don't know if I can help it! Aaargh.

We just never get a single step forward around here without about a million steps backward. There is not a single thing around this house - except maybe the garden! - that is even a tiny bit better than when we moved in. It's this unbelievable entropy: everything just decays until it explodes and needs a costly replacement. Is that the way it is with all houses? Or just the 70-year-old ones???

It's not just the house. Ted's work, too: like just when we think we're getting around the lousy pay, cruddy pseudo-random schedule, etc., they'll do something bizarre like ask him to come in half an hour early (and no, they don't let him leave half an hour earlier to make up the time - but thanks for thinking of it, like any SANE person would!).

Or refuse to let him take off for the Zareinu moveathon - a family event that cannot be held on any other day just because of his lousy work schedule. Or take more than one Sunday off in a row, even to have a baby or visit his family in Ottawa. Or trade days-off with anyone else there, because apparently a few people were abusing the more liberal trading-shifts policy. How? By taking a whole month off...?!?!? How is it possible to "abuse" the privilege of rearranging your work schedule to accomodate an actual life that might include vacations with your family, surgery, doctors' appointments, children's graduations, etc??

Oh! And the late shifts that they told him when he was hired would be twice a month are now sometimes happening every single week. I get SO mad every time I think about the little ways they chip a few bucks off his paycheque here and there.
Oh, also - like Shabbos. Apparently, some folks were resentful of the "early" Fridays that Ted & a few people got (never mind that this is a supposedly Jewish company with great respect for tradition - it even says so in their ads!) that they make him put in an extra half-hour each day during the week (ie Monday to Thursday) to make up the difference.

I wouldn't be so mad except this was TOTALLY not the deal when they hired him... so, of course, I get all righteously indignant, like, how can they change the terms of employment.

Hmm. Like the Jews in Mitzrayim... they didn't start out as slaves; at first, they were getting paid and working alongside the regular Egyptians. But then, by some secret agreement, the Egyptians gradually stopped showing up, and then, well, the paycheques apparently slowed down a bit, too. But you know Jews; I guess they didn't want to rock the boat... so they kept on coming, being good, loyal "Egyptian" citizens, as they started being chained up to work longer and longer days without pay, food, water, etc...

Anyway, l'havdil, because we are certainly more free than that, and a job is (marginally) better than no job, but it feels like they just keep turning that crank and making it harder and harder to earn the exact same paycheque. (ha ha ha - no, it never goes up!)

Plus now I have a cold - I hate colds! If you had had four children, maybe you would hate colds too. One reason: Bladder Leakage. I can live with the fevery woozy feeling (maybe, if I didn't have too many kids in my hair), and I can live with the runny nose, though I'm using up hankies faster than I can wash 'em these days. I've heard there are things you can do - cut back the caffeine (but I have kids!), do kegel exercises (when not chasing the kids), surgery as a last resort...oy, I don't want to think about it. And I don't want an awful, leaky, sneezy, hotty, scratchy COLD!

So here's the kvetch / most-urgent-to-do list so far today:
~ Naomi not napping (she's eavesdropping from her room)
~ YM had the cordless phone stashed in his room over Yom Tov and it died - and anyway it's holding less & less of a charge every day...
~ Gavriel Zev will probably wake up any minute
~ Washer broken
~ Dryer broken
~ Parking ticket
~ Speeding ticket
~ Tax bill (my father just called about this & the above 2 items - I was hoping it would be Ted on the phone so I could beg him to come home early)
~ Mrs ViKi shutting down for the summer (what the heck am I going to do every day?!?!)
~ I'm hot! (but not too hot today - it's 25° in here, down from 32° over Yom Tov...
~ Must pay Elisheva's camp $400 - the rest of what we owe
~ Must fill out Elisheva's school subsidy forms or owe them however-many thousands for this year & next
~ Haven't even seen a bill or started the subsidy process with YM's school
~ Must still follow up with insurance - but first, Ted must fix the eavestroughs or they'll cut us off
~ Buy camp supplies for Elisheva

Sure feels like we are never going to be any further ahead than we are right this sad, snuffly, too-hot, sickly-feeling moment...
And then I emerge from my selfish haze every few minutes to realize that Auntie Sally is having her surgery today. Refuah Sheleima... may Hashem guide the hands of her doctors and nurses and everyone who's touching her life at this moment.