Grow Old Along with Me: Why care that Avraham Avinu was the first to get old? 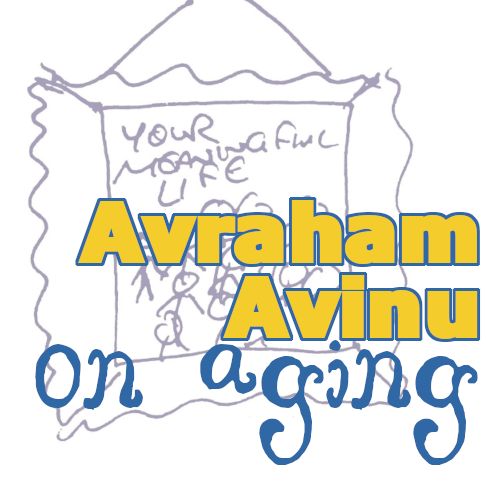 (to download a print-friendly PDF version of this dvar Torah, which was adapted from a shiur by Dr. Tova Sacher, click here)

There’s a very well-known midrash that in his old age, Avraham requested… well… to age. It seems like an odd request. He lived not long after the generation of people like Methuselah, who lived 969 years. Certainly, people aged before Avraham. Or… did they?

In fact, this midrash suggests, lots of people before Avraham were old – sometimes, very old – but nobody actually got old at all.

This whole midrash arises due to a problem with the passuk:

And Abraham was old, advanced in days.

Rabbi Nachman of Breslov said Hashem never makes the same day twice. “Every day is an entirely new creation.” Even if you wake up and today seems exactly the same as yesterday – it’s not.

In this passuk, we learn that

This is where our well-known midrash comes in, from Bereishis Rabbah. Avraham got old, and noticed that old people and young people all looked alike, and the consequence was chaos. Nobody knew who to honour because fathers and sons could look so very similar.

(And we already know from an earlier midrash that Yitzchak was born looking very much like Avraham Avinu so nobody would get mixed up and think that Avimelech, who tried to have a dalliance with Sarah, was actually his father.)

Seeing the chaos, and wanting to create a world of chessed as he did, Avraham asked for visible, outward, signs of aging. And the midrash tells us Hashem heard him and thought it was a very good thing indeed – so he made it happen. Avraham was old – and for the first time in human history, he looked it as well.

But that aging didn’t just happen. It was a reward, we learn in a midrash Tanchuma. The midrash brings a proof for this in a roundabout way, from Mishlei:

Grey hair is a crown of glory; it is found by way of righteousness.

Avraham was all about righteousness, and so the midrash tells us Avraham was “worthy of” being the first person to introduce aging into the world.

The midrash gets all flowery about how that crown of glory idea, which is no small thing given that descriptions of Hashem, such as in Daniel, actually describe Hashem Himself as having white hair.

Interestingly, in Kabbalistic sources, Hashem is described by the Yam Suf as being a black-bearded young warrior, while by Matan Torah, he is an old man whose beard is white as snow.

For at the Red Sea God seems to Israel as a young man and his beard black as a man of war will arouse envy to fight with the Egyptians and drown them in the Red Sea, while at the giving of Torah on Shavuot seems to them like an old man whose beard is white as snow. (From Sha'ar Hakavanot, Inyan Chag Hashavuot)

Just as various descriptions of Hashem’s garments demonstrate different attributes of Hashem – unfortunately, one of the best books I have seen on this is not a particularly Jewish one, but still worth reading, perhaps -- so, too, Hashem’s hair colour tells us a lot about which attribute is at play at any given time.

And the same is true of Avraham. With his change in hair colour, he brings a whole new perspective into the world: aging as a framework within which to build a meaningful life.

Before Avraham, this midrash is telling us, people saw life as undifferentiated. You begin life, you grow up, you keep going until you die. It doesn’t add up to anything. It doesn’t go anywhere. It just is… until it isn’t any longer.

This may be a well-known midrash, and it’s fun to share with kids. But it seems to me that its greater meaning gets lost. Especially what it means for us.

Yet another midrash Tanchuma goes even further, sharing requests from all three avos. Avraham davened for old age; Yitzchak davened for infirmity, a wakeup call that things were winding down and a way to do teshuvah; Yaakov davened for illness, or rather, for some kind of warning before death.

This midrash seems far less rosy than the first! In the first, growing old is amazing, it’s a sign we’re becoming more like Hashem, it’s embracing wisdom and purpose – it’s something Avraham had to be worthy of. Whereas in the second, growing old entails pain, sometimes a lot of pain, even if it serves a purpose.

There is a third midrash here about aging, a commentary on a line which appears later in the parsha:

And Abraham took another wife and her name was Keturah.

How old is Avraham when he marries Keturah? 140. He’s already buried Sarah. He’s married off Yitzchak. His legacy, seemingly, is secure. And his future is seemingly just as insecure. He had no clue how much longer he would live (A: 35 years, and he may have known this through ruach hakodesh, but okay…). Yet he’s remarrying anyway.

This is an age when he could easily give up. He could sit back on his laurels, enjoy the grandchildren, the fruit of his labours. But Avraham doesn’t. And this third midrash ties Avraham’s attitude in with a passuk in Koheles:

In the morning, sow your seed, and in the evening, do not withhold your hand, for you know not which will succeed, this one or that one, or whether both of them will be equally good.

What does this passuk mean? You never know which of your efforts will bear fruit. Even when you think you know… you never know. In a world where Hashem has had to start over from scratch a couple of times already, Avraham is in a position to understand this perhaps better than anybody: you never know what your legacy will be.

So he doesn’t retire. He keeps going. Aging has given his life structure, purpose, and meaning. A framework in which to place every single thing he does, from the moment of his first connection with Hashem to his very last moments, after which, his two sons, Yitzchak and Yishmael, come together to bury him in Maaras Hamachpela.

For Avraham, aging is no excuse. It’s a gift. It’s an opportunity.

Aging, Avraham tells us, is a sign that we are leaving one stage of our lives and moving on to the next. It reminds us that if we want our life to mean something, we have to continually work on building our legacy.

Avraham was the first person to see life as a journey with a purpose, as opposed to just a continual striving that does not build or lead anywhere or add up to anything at all.

May we all use this week’s parsha as an opportunity to count our grey hairs, to examine the framework of our lives, to reconnect with our deeper purpose and then emerge, fortified, to continue the journey for every single minute it may last.

(Adapted from a shiur by Dr. Tova Sacher)