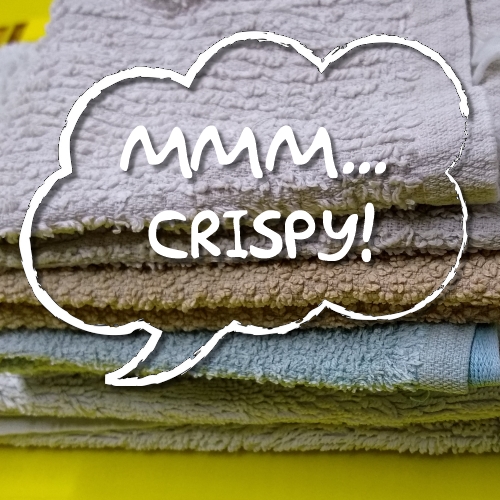 Fabric softener commercials have convinced most of us that the best, maybe even only good way for towels to be is... fluffy.  Just pop them in the dryer with the right product and presto, they're baby soft in minutes.

But why?  Why is fluffy the only or better way?

After years of air-drying laundry, I'm going to be brave enough to step up here in this public forum and say it:  three cheers for crispy towels!

A crispy towel is STRONG.  Sturdy.  Tactile.  Japanese people apparently love the idea of scrubbing off yinky dead skin.  A crispy towel can do that for you.  It can practically stand up on its own.
Crispy washcloths fold themselves up like books and stay folded -- no matter what you do to them.  You've got to love that kind of discipline.

These days, when my fingers sink into a fluffy towel, they are astonished at the lack of resistence.  The plushiness.  It's like holding a soggy noodle -- not that it's wet, but that it's just kind of limp.  It sits there.  It doesn't DO anything.  It just isn't aggressive enough, like a crispy towel is.

Now, okay.  I'll admit we live in Israel, a place with tons of sun and it never goes below freezing.  Here, we don't even have a dryer, and I can count on the fingers of one hand the number of times I've actually missed it.  Some days here, it's so hot and sunny that I can wash and dry multiple loads of laundry -- the previous load dries in the time it takes to wash the next one.

But we were air-drying for years, even in Toronto.  Even in the winter.  Even when we had kids in cloth diapers.  For a few years, we had a washer in the apartment and a dryer in the basement, so I was air-drying on the balcony to save the shlep up and down the stairs with wet-then-dry laundry.  Year-round.

And in fact, if there is one thing that's better than a nice, stiff, crispy towel -- it's a nice, stiff, crispy towel that was air-dried outside in the frigid winter air.  That smell -- if I could bottle it, I'd get rich.  But even in the dingy suburb of Haifa where we live, there is something about the smell of a sun-warmed, breeze-coddled towel (or heck, pillowcase, for that matter) that is simply heavenly.  No fabric softener on earth can match it.

In our house, before we moved to Israel, we had a dryer, and yes, I used it.  We had a toddler, and then a newborn in cloth diapers, so I'm not even going to issue a little mea culpa.  But I also did my best to air-dry things outside in the backyard when I could.  Not through rain or snow or hail or sleet... but in most other conditions, sure.

But after ditching the dryer once and for all six years ago when we moved here, I have to say I'm happy to be a full-time crispy towel girl.  Our first Israeli apartment had uncovered drying lines, which was a hassle in the winter -- involving air-drying stuff indoors for days on end, don't even ask.  That was kind of horrible.  But one of this apartment's few saving graces is a covered front porch which is THE best place to hang laundry, almost year round.

Here are three incredible reasons why air-drying towels rocks my world -- and maybe yours, too:

Hanging towels to dry also naturally removes odours, and can bleach out stains if you hang them in the sun.  And hey, while we're tallying benefits, you're getting outside, saying hi to the neighbours, and maybe getting a little exercise if you have to lift the stuff up and down. :)

And then, of course, there is the fact that air-drying towels rocks because air-dried towels are LIKE rocks.  Hard!  Solid!  Substantial!  Gritty!  No more wimpy towels for me, please and thank you.

If you're not absolutely convinced, or you want to air-dry but would like a little fluffiness, there's hope.  Most sites recommend you cut the laundry detergent in half and add vinegar to the wash.  Sometimes in Canada, I added vinegar just because, but here you can't get the huge things of vinegar I used to buy there, so I haven't been.

A couple of years ago, GZ, maybe 9 at the time and in one of his "musing" moods, commented, "Wouldn't it be nice if they invented a machine that would take wet clothing and dry it?"

Would it be?  Maybe.

Absolutely, if you have lots of kids and don't have a covered porch, then yeah, even in Israel a dryer is a very good thing.  Most of my friends here actually do have dryers even if they air-dry much of the time.

If you have big items like duvets that don't hang well outside, yes, a dryer is a great thing.  And don't get me started on the number of times I've brought things in from drying outside only to find them covered in ants.  You don't get ants in a dryer.

And okay, when it rains, sometimes it rains sideways, and I run outside to pull the laundry hanger under the most-covered part of the porch.  Which, okay, is right in front of the door, meaning the mailman and my husband have to slide the laundry out of the way to get to the door.  But how many days a year is that?  Realistically, maybe 20.  Maybe not even that many.

A couple of weeks ago, around the middle of September, I'd just hung up the laundry, come inside, and started working.  I glanced towards the window and thought, "Wow, it sure looks like it's going to rain."  It was gloomy, overcast, and darkening quickly.  And then the rain came down -- an incredibly early rain, and not the light "teef-toof" of the usual first rain but a torrential downpour.  All over my laundry, which I pulled in front of the apartment door to wait out the storm.

My father used to have a theory that it always rained right after he'd mowed the lawn.  Maybe Hashem was watching and decided to play a little joke with me and my laundry.

But because it was September in Israel, the minute the rain stopped, the sun came out, the temperature went back up to thirty degrees, and the world got thoroughly steamy and the few sprinkles that had gotten on the laundry dried right away.  And the towels came inside that night, or the next night, crispy and already folded.

Strong, alert, and at the ready to scrape every last drop of moisture off the next person to take a shower.