Introducing… the parsha book you never knew you needed: The Rhyming Torah 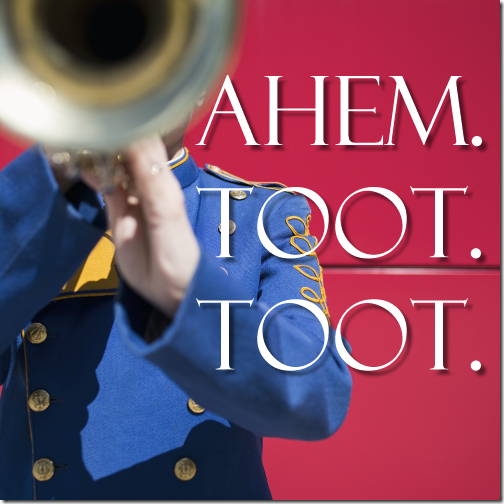 You know how we're supposed to be modest and not go shouting our accomplishments from the rooftops?

Well, sometimes, I'm a little too modest.  And then I need a talking-to from my miniature Social Media Coordinator, aka Naomi Rivka, age 13.

Sitting around the Shabbos table, I mentioned that I'd finally finished my book of parsha poems, The Rhyming Torah.  And she asked the obvious question:  “So are you going to let people know?”

As a busy little social media bug, she knows all about the ins and outs making your way to fame and fortune on the busy, busy internet of today.  And as my kid, obviously she wants me to succeed.  But I had to be honest.

“Well, you at least have to tell your blog,” she announced.

I don’t usually do launches for my books, self-published or otherwise, but I probably should.  I’ve had a few just in the past year, and I believe each and every one of them is great.  Not enough people know about them, but it’s almost literally painful for me to toot my own horn, so I generally don’t.

In fairness, I wrote most of the poems while we were in Toronto (most are still available in their early unedited form here), then shelved them here on this site because I didn't think they were worth publishing.  But then a couple of years ago, I started thinking, "Why not...?"

You know how you get that little itch and then eventually it simply MUST be scratched?

So I decided last year when we started the Torah all over again (what a beautiful system) that rather than writing anything new, I would FIX every single parsha poem and post it to Facebook etc for feedback to make sure they were good.

I got some great feedback, actually, which really helped me improve the poems.  Which were improved anyway, simply coming at them with fresh eyes after all those years.

So in effect, this was not just ONE labour of love, but TWO – first, writing the poems, and second, editing them and in some cases rewriting from scratch to make sure they were up to my own standards.

Some of them are still pretty cheesy, and I’m okay with that.

Here’s the book description from the back cover:

Bereishis comes first, and then we’ve begun;
Shemos is next, and it’s just getting fun;
Soon comes Vayikra, Bamidbar, and last,
Devarim wraps up and the Torah’s flown past!


Here at last is the book you never knew you needed for your Shabbos table. Read it aloud with your kids or students to add a new dimension to your study of the weekly parsha. An ideal companion volume to The Family Torah, this book offers a wide range of rhyming experiences from week to week throughout the entire Jewish year. Use it to start discussions or as the inspiration for creating parsha poems of your own.

When the bug to publish the parsha poems first bit me, I went and got a cover artist I’d worked with before to create matching covers so that the poems book could be a matched set with The Family Torah, my regular weekly parsha book: 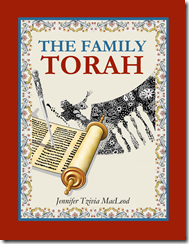 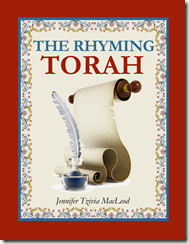 Sometimes, having a cover already designed really inspires me to get going and finish a project and it really did help, in this case, to be able to visualize the new book as it was taking shape.

And besides editing the poems so they went from okay to good to great, I also laid them out as I went so that they’d be ready to publish right after Simchas Torah.  Yes, mid-November is what counts as “right after” Simchas Torah in my world.

Here are a few random page spreads from inside the book, which I’m extremely proud of. 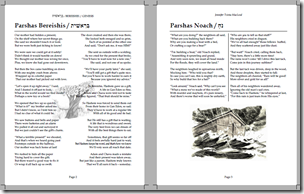 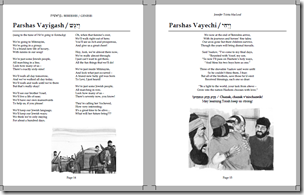 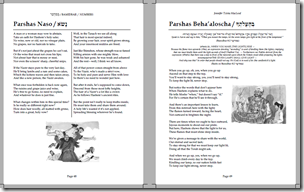 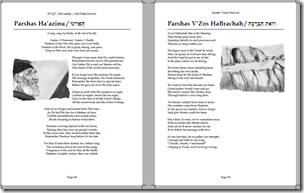 (click any page spread to see it a little bigger)

So there we are.  I hope she’s happy now.  I have self-promoted.

This is me, blowing my own horn for a change.  Because the truth is, I think this book is great and I’m mighty proud of both of them.

Both books are currently available on Amazon, though it will take a few days for the “Look Inside” feature and back cover image to start working.  I’d be honoured if you would consider adding them to your family’s Jewish library (in the marketing biz, this is known as “the ask” – and I’m terrible at it!):

The Family Torah is available for Kindle but The Rhyming Torah isn’t yet.  I hope to add it whenever I have a chance, but for books like these, I always feel like the print is more important so you can have a physical copy at the Shabbos table.

If you’ve used these books or are planning to, or (better yet!) if you’ve written a parsha poem of your own, I’d love to hear from you, or you can leave a note in the comments.