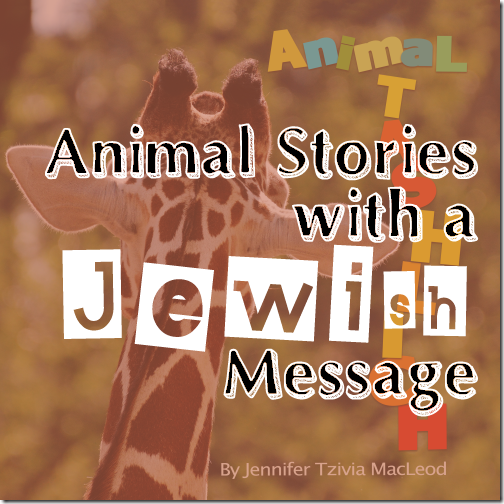 Are your kids bored with typical Jewish children’s books??

I know mine were!

That’s actually one of the main reasons I started writing books for Jewish kids.  I was sick of stories that simply repeat the basics:  “It’s Rosh Hashanah, we dip an apple.”  “It’s Sukkos, we sit in the sukkah.”  “It’s Chanukah, we light the menorah.”

I was bored to death of these, and so were my kids, by the time they were two years old or so.  Plus – kids love to read about animals.  I really believe that animals can give us a lot of insight into ourselves and the things we do.

That’s how I got the idea for my first animal book – Penguin Rosh Hashanah.  I was sitting on a train wondering what to write for Rosh Hashanah, and I suddenly had the random thought, “Penguins.”

Penguins, or any animal, really, are the exact opposite of Rosh Hashanah.  And I love it.  Loved the idea of finding connections and creating a very loose, light story which davka (specifically) didn’t tell kids what Rosh Hashanah was about… at least not directly.

What do penguins have in common with Rosh Hashanah?

Well, quite a lot, actually.  They dress up, for one thing. They all look alike and travel in large groups, just like we do, dressed in white and hanging out in crowded shuls on Rosh Hashanah.  They literally step on each other’s toes, which I loved.

The whole project made me smile.

Since I wrote Penguin Rosh Hashanah, a few more animal Yom Tov stories have made me smile…

(At one point, my husband suggested Cow Shavuos and my answer was an unequivocal NO.  The connection is too obvious: dairy-cows-Shavuos?  Nope… I told him he could write that one himself.)

It’s been a lot of books so far – and I’m very, very proud of every single one of them: 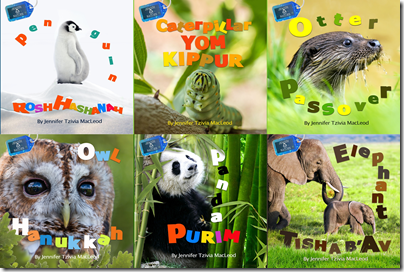 Why use nature to talk about yamim tovim?

Here’s why I think these books are – every single one of them – a fabulous supplement to books that teach what and when and where and why and how: all the facts of the yom tov with none of the wildlife:

I believe that using the theme of nature, and high-quality photographs of animals, opens kids up to new ideas and new conversations around yamim tovim, customs, and halachos that they already know well.

It’s a new way of looking at things.  Couldn’t we all use that from time to time???

These books are about nature, a little bit.  I’m very careful when I’m creating books to find out about the exact species of animal and to use photos of the same species which are true to its habits.  There are no people in any of the pictures – I wanted photos of animals on their own, in nature.

But on the other hand, these books are very much about the Jewish things we do – together and separately.  The fun minhagim, the slightly-silly minhagim, the sad and difficult ones as well.  We read the megillah, we have great meals, we also fast and daven.  I wanted to use pictures of animals as the medium for all those stories about ourselves and many more.

Through animals, we learn more about ourselves.

I’m just in the middle of finishing up a seventh book in the series… and this one isn’t for a specific yom tov OR a specific animal: it’s called Animal Tashlich. 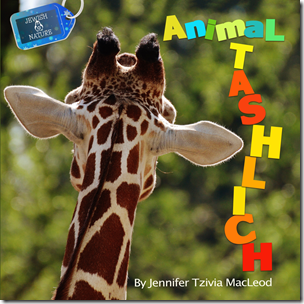 As with all these books, I’m kind of in love with this seventh book, Animal Tashlich, because it makes me smile.  It makes me think twice about a time of year that we sometimes take for granted.

Unlike most of the other books, this one has actual pictures of kids in it.  But mostly, it’s about animals.  I wanted to illustrate different ways of doing tashlich – if animals did tashlich: 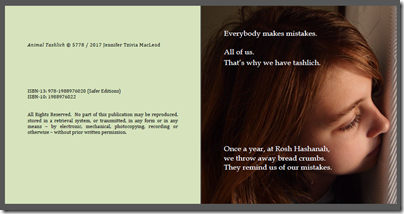 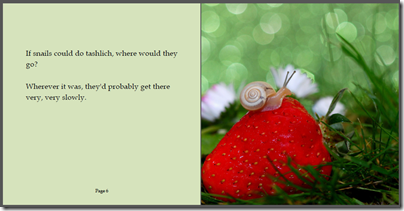 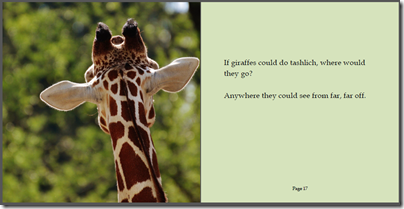 Although I believe very strongly in creating books with a message, I also believe that we shouldn’t hit kids over the head with that message.

Why?  Simple – if they feel like they’re being preached to, they’ll probably tune out.  So even though these animals have a Jewish message, I want to make sure I’m creating books kids can enjoy just for the animal pictures and simple text, if they want to.

Who are all these books for??

As with all the other books in this series, I am hoping that Animal Tashlich will be relatable to people from a wide range of religious backgrounds.

The book doesn’t make many assumptions except that kids know a little about the custom.  And although it doesn’t teach specifically about what tashlich is, it reinforces the significance of the custom by having kids think creatively about where we go for tashlich and what we’re supposed to do when we’re there.

(As with the book Elephant Tisha b’Av, there’s an afterword in this one following the main text explaining to parents and kids what tashlich is all about.)

I really hope, however, that being accessible to a wide range of readers doesn’t mean these books aren’t also accessible to kids like mine who are being raised in religious families.

Someone took off a star recently in a review of my book The Family Torah, writing that “It is an orthodox oriented item.”  I don’t see most of my books – especially these Jewish Nature books, as being “orthodox oriented.”  I see them as being family-oriented, kid-oriented, chag-oriented, and hopefully a little bit fun-oriented.  And I really hope you’ll agree!

I know it’s too late for this year, but I’d love it if you could check out Animal Tashlich, and maybe even buy a copy to put away for next year.  Or… it’s not too late to think about Chanukah, perhaps by inviting some OWLS into your family… 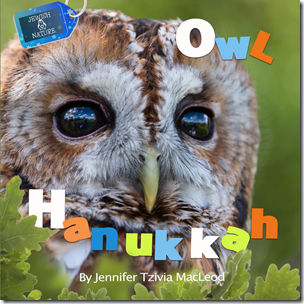 Or just click through to see the ENTIRE series.  Pick one and dive in – and be prepared to share timeless values throughout the Jewish year.