Dr. David Dao and United Airlines: what the REAL story is actually about 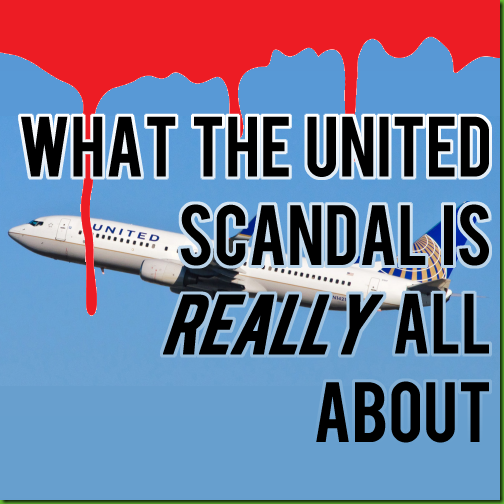 Dr. David Dao and United Airlines: Why is nobody talking about what the story is REALLY about?

Maybe by the time this posts, the hysteria will be over.  But I am hoping there’s still time to talk about the real issue here:  law enforcement and mental illness.

A lot of people are saying that a) there is confusion about whether the "bad doctor," de-licensed in Georgia due to a sex and drug scandal - is the same person pulled off the United plane last week, and b) even if he is, it doesn't matter because it is "totally irrelevant" to how the airline and law enforcement officials treated him.

On the first question, whether or not it was the same guy, I'm going to with the latest (as of this writing) from the LA Times and with Snopes, who say it totally was the right guy, and explain the reason for the confusion (there IS another Dr. David Dao, but he's not related to either the sex/drugs scandal or the airline scandal - who are both one and the same).

On the second, however, I believe his past is actually VERY, very relevant.  Why?

Because Dr. Dao (THIS Dr. Dao!) has demonstrated a clear history of poor decision-making.  And he was treated by law-enforcement officials based on his behaviour.  They had nothing else to go on.  And given his history, it’s fair to assume that he was probably behaving less than rationally at the time.

The real story, behind the story

Does that mean they had a right to bash his head on an armrest and drag him bodily off the plane?  Obviously not!  They had no right to hurt him, no matter how irrationally he was behaving.

But this ties in with a bigger issue that nobody’s talking about.  Everybody’s focusing on United Airlines.  Nobody’s asking questions about how the police treat people who are mentally unstable, and possibly mentally ill.

This isn’t what the story has been about so far.

So far, the ongoing story in the media has been about building hysteria along the lines of:  "The airline will take your seat from you, with force if necessary; be AFRAID, be VERY afraid," and I don't buy it.  Is that really true for the majority of us?

The people who perhaps should be afraid are those who are mentally ill and lack complete control over their behaviour.

We’re in the middle of a huge campaign of Black Lives Matter.  Black people are doing a great job of standing up for themselves and bringing others on board, including law enforcement, towards “working vigorously for freedom and justice for Black people and, by extension all people” (BLM website).

People with mental illnesses may have a tough time with the “working vigorously” part – so society needs to do it for them, to some extent.

All police need training in dealing with unstable and mentally ill people, and Dr. Dao (THIS Dr. Dao) does have a mental-health history and a record of past instability and unwise decision-making, to say the least.  As of 2011, an evaluating psychiatrist noted that Dr. Dao "lacked the foundation to navigate difficult situations, both interpersonally and in a complex profession," including a "need to control, avoidance, withholding information and magical thinking."  Psychiatrists also commented on his history of "poor decision-making" and "boundary-related" practice issues.

If you’re in a law-enforcement role, you have to be able to tell the difference between someone who is insane and someone who is acting with criminal intent, or you are absolutely going to end up hurting people.  This is an ongoing problem for law enforcement.

Should we all panic about United?

In this case, Dr. Dao was probably not suffering from an active mental illness.  However, he definitely made several very bad decisions in light of being asked to leave (such as resisting an order by a law-enforcement official, and then running back into a secure area, in violation of FAA regulations).

In this one case, yes, United acted badly, police acted very badly, Dr. Dao acted badly and was treated in a disproportionately cruel and violent way as a result.  Does that mean there’s a lesson here at all for the rest of us?  Those of us who would probably go quietly (grumbling quietly!) and not resist in such an irrational manner?

The media is actually trying to paint this as part of a growing TREND towards passenger-bumping. After all, everybody flies, so if you buy cheap tickets without prebooked seats like I do, then it actually does become relevant. I don't know if it's really a growing trend, however, or simply media hype, linking cases that might have gone unnoticed before.  (True, airlines have and always have had the right to bump passengers; this is in the fine print we all agree to.)

Since there probably isn’t a trend, and the airlines probably aren’t getting more unpredictable and violent, then I hope the media will turn some of that attention on how the police deal with people who are mentally ill, or borderline mentally ill, or mentally unstable.

Instead of hype, can we start a meaningful conversation around the lives of people with mental illnesses – lives which truly matter… even if they can’t speak up for themselves?