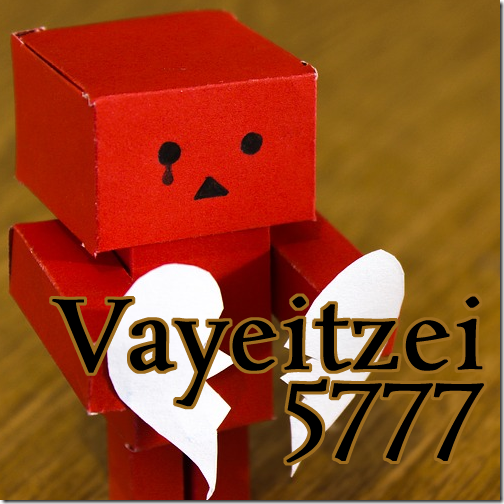 My mother recently spent two Shabboses (Shabbatot) with us here in Israel.  In her honour, I actually put together two divrei Torah.  This is the first, which I said over at a kiddush we also made in her honour.  Sorry it’s too late for this year – I was too busy visiting to post!

So my mother is here visiting Israel, and I actually felt more like talking about last week’s parsha instead of this week’s, because of a line we mentioned in our shiur that says so much about motherhood:

"Isaac loved Esav because he ate his game; but Rebecca loved Jacob." (Genesis 25:28)

The actual Hebrew of this verse reads that Rebecca "loves" Jacob, in the present tense.

Isaac's love for Esav is described as contingent on the food that Esav provided - that's why the love is spoken of using the past tense. But Rebecca's love for Jacob was not tied to anything, it was unconditional and therefore described in the present, ongoing sense.

Ha, so I guess I did talk about last week’s parsha after all. But when I looked, I realized that of course, this is the most appropriate parsha in which to honour my mother. After all, we have not one but FOUR mothers in this week’s parsha: Rachel, Leah, Bilha and Zilpa.

We already know a lot already about Rachel and Leah: their great love for each other, their destiny to marry the two brothers Yaakov and Eisav, and how Leah davened and conspired with her sister so she could avoid that fate. But we don’t know so much about Bilha and Zilpa. These are the unsung mothers of Israel. They gave birth to tzadikim, 4 of the 12 shivtei Hashem, yet we understand very little about them.

Pirkei d’Rabbi Eliezer says that they were actually younger daughters of Lavan, which makes sense, except the parsha only describes them as “maidservants” – shfachot – which doesn’t seem like a nice way to refer to your sister. In any event, Shir Hashirim Rabbah lists Bilha and Zilpa among the six imahot, matriarchs of Israel. Yet we don’t bless our daughters that they should be like Bilha and Zilpa. Also, the Torah does not refer to them in the same way at all. The order in which they are given is different, and they have different roles. For example, Leah already has children when she gives Zilpa to Yaakov, while Rachel has no children when she gives Bilha, who always sort of comes out as the underdog of the story.

It is easy to imagine that whoever they were, these two mysterious women were elevated by being married to Yaakov and giving birth to children who would become the holy leaders of bnei Yisrael. There’s precedent for this in the story of Hagar, two generations ago, who left a life of comfort, the midrash tells us, in the home of Pharaoh, in order to marry Avraham.

There’s a clue to why they would want this in the parsha, where Rachel says to Yaakov, "Give me children, and if not, I am dead." / הָֽבָה־לִּ֣י בָנִ֔ים וְאִם־אַ֖יִן מֵתָ֥ה אָנֹֽכִי:

Any of us who have ever experienced infertility – our own or someone else’s – will know that’s exactly what it feels like. Like life can’t go on without a child. And in a way, it can’t. Your own life, of course, goes on. But without children, our life ends when we do.

However, Yaakov actually gets angry at Rachel for saying this. Some commentators take his side – there’s an opinion that because of her behaviour here, she missed out on her chance to be buried with the others are mearat hamachpeila. But the Ramban says Yaakov was criticizing Rachel for weeping, taking a hysterical, hyperbolic approach, and demanding that he pay attention only to her own needs.

By the way, Hashem, in turn, gets angry at Yaakov here when he’s so unsympathetic towards Rachel. A midrash says, “the Holy One, blessed be He, said to him: Is that how one responds to those in distress?!” Take that – every unsympathetic husband ever.

And speaking of weeping, there has been an interesting turn of events here. At the beginning of the story of Rachel and Leah, it is Leah who is “tender-eyed” and weeping – midrashically, over her intended marriage to Eisav. Yet here, Rachel is in tears, and according to Yirimyahu, it is Rachel who “weeps for her children,” throughout our very long exile.

By the end of the story, however, Rachel has her children. At least, by the end of this parsha, she has ONE child. But we can see right away that she’s not satisfied. She gives him a name that means יֹסֵ֧ף יְהֹוָ֛ה לִ֖י בֵּ֥ן אַחֵֽר: / “may Hashem send me another son.”

So what is going on with all this weeping and kvetching? Because this is one of our imahot we’re talking about, we have to believe that she’s doing all this l’shem shomayim. The truth is that she sees Hashem’s plan very clearly, perhaps more clearly than Yaakov, and is eager to see it all come to pass. Perhaps she even knows she doesn’t have much longer, and she knows, chazal tell us, that there will be 12 tribes altogether. So she asks for one more son, no more.

This is reminiscent of the tefillah of Chana, by the way, who asks Hashem for זֶרַע אֲנָשִׁים – a single male offspring, which she will dedicate to Hashem. Rachel, too, wants children not only for herself, and not only as her own legacy, but as a trumah, a contribution, which she can give back to Hashem to repay Him for His kindnesses.

We can learn a lot about motherhood from all of the righteous Jewish women we read about in these recent parshiyot. From Rivka, as I mentioned, we learned the value of unconditional love, but from Rachel, we begin to understand mothering not for ourselves but for the legacy and the continuity of our people. We know Rachel weeps for her people as they leave eretz Yisrael to go out into exile, but we also know that she will be the first one there rejoicing as we return with moshiach.

I’m so excited to welcome my mother to Kiryat Shmuel and to all of you, the people who have stood by us as we’ve made this weird and wonderful transition to life in the holy land. I know it’s been very difficult living without us in Toronto, just as it’s been very difficult for all of us living without my mother here. There’s only so much you can do with Skype, WhatsApp, email, before you realize that ultimately, what you want is a hug and that feeling of being together.

We’re here in Israel because we believe we’re part of something exciting, something historic. I can see the future of the Jewish people unfolding here and now, and I hope we’ll be a part of it (okay, also, there are some great kosher restaurants!). As I’m sure Hagar, Bilha and Zilpa knew when they left a life of comfort to become footnotes in the story of the Jewish people, that comes at a steep cost.

In a story about Choni, he scorns a farmer for planting a carob tree he would not live to eat the fruits of. In the story of Rachel imeinu, she bears children in pain that she will not live to see grow up. Parenting, mothering, isn’t about instant gratification. Sometimes, all you get in the short term is pain.

Leaving my mother behind was almost the hardest thing I’ve ever done (sorry, leaving my son still has to take first place). Most of you here have experienced the wrenching feeling of saying goodbye at the airport in a city you once called home, not knowing when you’ll see each other again.

So as Rachel taught us, we must face forwards, keeping our eyes on the plan, and on the reward for our sorrow, which, as all of these wonderful mothers have taught us, is more than worthwhile. The reward is a Jewish future, Jewish grandchildren and great-grandchildren whose laughter resounds through the mountains of Yehuda and the rolling hills of the Galil. I may not live to see it, but I can almost hear their voices singing now.