Why are Jewish children's books so bad? 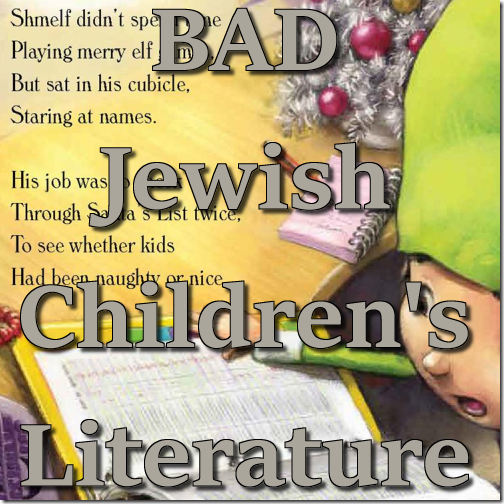 I shared this post last week on Facebook asking why so many Jewish kids' books are so awful.  Lots and lots and lots of people clicked Like.  Some even shared it.  But very few people actually answered the question, so I’m asking it again here.

What do you think?  Why is there so much bad Jewish children’s literature?

Before we start, though, here’s another picture from Shmelf the Hanukkah Elf, the masterpiece that kicked off this whole controversy. 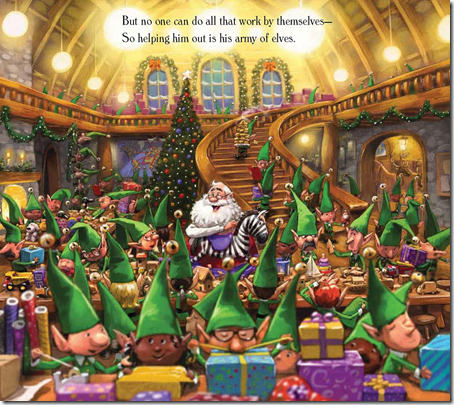 Yup, a nice Jewish story to share with your Jewish kids for any Jewish time of year!

I don’t want to write too much because for once, I really do want to hear what you have to say.  But just to get those brain-thoughts flowing….Here are some comments that a few people did post on Facebook:

Ouch.  This came from another children’s author.  It makes me feel so sad.

Not sure what this meant.  And considering I just sold a children’s picture book about a little girl who grew up to be a physicist, I think the market is wide open for the Inner Geek!

I think what this guy is saying is that if you focus on REAL Judaism, like Shabbos and kashrus and Pesach etc., then the good literature will follow.  However, this has NOT, sadly, been my experience of frum kids’ lit.

Children’s author Eric Kimmel jumped in to point out the problem in the first paragraph of the article:  "For books whose purpose is to teach aspects of Judaism…"

He wrote, “A book that tries to teach something instead of just telling a good tale is dead on arrival. Kids can spot teachy/preachy a mile away. Come up with a good story and tell it well. The rest will follow.”

Eric Kimmel also pointed out, “The problem comes when writers and publishers try to be cute, trendy, and aim at adults. They lose sight of what's essential: tell a story that children want to hear.”

I think we’d all do well to focus on that.

But I, too, am appalled by how generic and how awful Jewish kidlit is.  Someone asked after I posted this if things were better in Israel.  Sadly, they are not.  Most children’s books being published here are either almost violently secular local products or translations of “international” books, ie the Diary of a Wimpy Kid series.

So there’s not much hope for the future of Jewish children’s literature coming from this little patch of the Middle East.

I said I don’t want to say too much, and I don’t, because I want to hear from you.  But I do want to suggest you read Heidi Rabinowitz’s comprehensive list of GREAT children’s literature, which she put together in response to this article.  So if what’s out there is leaving a bad taste in your mouth, stop by and pick out a few classics to share with your kids.