Once upon a time, in Bnei Brak … 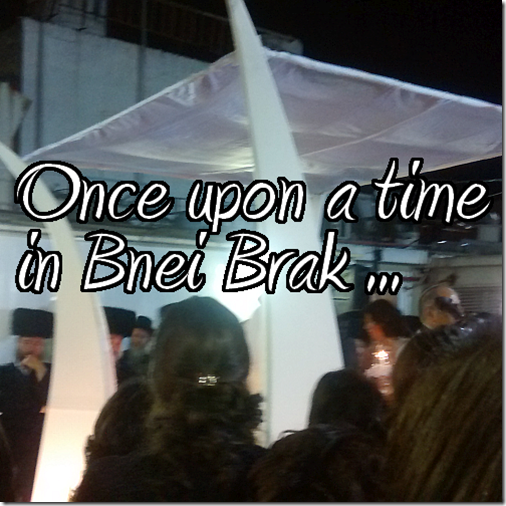 Once upon a time, there were two brothers.

Except they weren't really brothers, were they?

No, they were half brothers.

And one hated Judaism.

But he hated... Judaism.

He came to Israel.  He lived it.  It's a simple story, really.

Yes.  He came to Israel after the war, he had three children here, they had children, and grandchildren and great-grandchildren, without end.  Ayn sof.

Did he have children?

Did they have children?

Four.  How many great-grandchildren did the first brother have again?

Why did the first one hate Judaism again?

I told you, he was a very proud Jew.

And are you a proud Jew?

And how are you related to the kallah again?

I have no idea.  My zeidy... and her great-grandfather... long ago, were brothers.

What's that black crumbly stuff on the floor?

Okay, you caught me.  I'm an imposter.

These are my only closed-toed shoes.  I normally wear sandals, no socks, no stockings, okay? And tonight, coming to this chasunah, I didn't want to wear sandals, all right?  But I do cover my hair.  Almost all of my adult life.  This tichel on my head?  It may not be a sheitel, but it’s the real me.  And yeah, I grabbed the wrong shell and you can kind of see my elbows peeking out down there.  Sorry; just try not to look.

So the black crumbly stuff all over the floor…

They’re old shoes, and they fell apart.  I pulled them out of the back of the closet and I didn’t look closely, and by the time I shoved them onto my feet in the car coming here, the soles had already begun to crumble into sticky black tar crumbs.  I plan to throw them away the minute I get home.  I am so mortified.  I don’t belong here.

I thought you said this was a simple story.

Is anything ever simple, in our modern Jewish families?

Sometimes it is, here in Bnei Brak.

But I am so very glad you’re here, after eighty years of our families being apart.