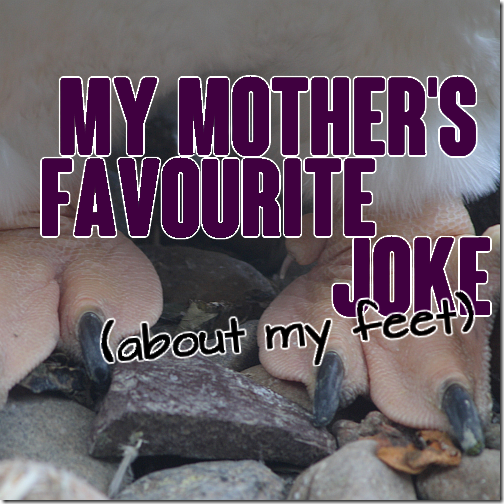 My mother has a joke.  Maybe you’ve heard it before?

So a guy goes to the doctor.  Says, “Doctor, it hurts when I go like this.”
And the doctor says, “So don’t go like that.”

This was almost literally my conversation today, with my second orthopedist this month, about the unbearable pain in my right foot.

My problem is that it only hurts when I’m barefoot.  Put on a pair of shoes and I’m Wonder Woman.  I leave everybody in my dust.  Take them off… and I’m Little Red Riding Hood’s grandma, barely able to get out of bed.

This pain has a name:  PTTI.  That’s its name in Hebrew, too.  Posterior Tibial Tendon Insufficiency.  Don’t Google it; the pictures are horrific and mine really isn’t that bad (see below).  Basically, it means that the flat feet I’ve had my whole life have bottomed out completely.

So today I met with Ortho #2, Specialist Foot Ortho Guy.  Ortho #1 was a regular ortho, non-specialist.  Both very nice and personable despite the long lines outside their doors.  This guy was slightly older, grey hair, distinguished looking small beard and glasses.  Faint, faint, faint trace of a Russian accent.

Conversation with the Doctor.

Him:  Of course.  You think I should sit while a woman is standing?  Anyway, I see people with foot problems.  What do you think the chair is there for?  (This was a torrent of Hebrew; these are the only four things I picked out of the deluge.)

Him:  Take off your shoe.

Him:  Can you tell me the problem?

Me:  Sorry, I thought maybe the other doctor left a note.

Him:  If I read all the notes, I wouldn’t have time to see patients.  [No way to explain this, but he said it very, very kindly, like he’d rather interact with patients than the computer.]

Me, in Dummies Hebrew:  Maybe half a year since it started my foot hurts when I walk.  When I wear shoes, no pain.  When I not wear shoes, yes pain.  I think it is growing, the pain.

Him:  Yes, you see, there is a nerve that runs from here (poke) to here (poke) and it is… (lost the chain here but I already knew this anyway)

Me:  That’s what the last doctor said.

Me:  So what do you suggest?

Him:  Do you go barefoot a lot?

Him:  I suggest you wear shoes at home.

Him:  I don’t like to give medication, because … (lost the chain but the gist was) the side-effects are worse than the original condition:  blood pressure, heart conditions, etc.  Better not to start with medication.  (somewhere in there, he threw in the fact that he’s been a doctor for 45 years)

Me:  The first doctor said something about insoles (forgot the word, so I said it in English)…

Him:  You don’t want to start with insoles.  First of all, they’ll cost you 500nis a year; you need new ones every year.  For 500nis, you could have one pair of insoles or five new pairs of comfortable shoes (I don’t know where he’s buying shoes – that’s about $25 a pair!).  Second, once you start wearing insoles and your feet get used to them, you have to keep wearing them.  Better not to start with insoles.

Me:  Well, the first doctor also mentioned physiotherapy… (luckily, the same word in Hebrew) Maybe there are exercises to help strengthen it?

Him:  Okay.  I’ll refer you to physiotherapy.  (types a second to fill in details on the little referral letter)  Left foot?

Him:  Okay.  You don’t have a big problem, though.

There is no way to explain that even though

a) I didn’t get anything more than a confirmation of a diagnosis I already knew (I actually already had a referral to physio from Ortho #1),

b) He only spent about five minutes with me, and

c) Didn’t acknowledge that I shlepped over last week to have X-rays taken (no mention of the X-rays whatsoever), and

d) He dismissed everything Ortho #1 had said might possibly help,

I nonetheless came away feeling completely content – and satisfied that I’d been heard.  Maybe a little charmed by his courtly manners even if they were fast-forwarded a bit to adapt to the reality of an Israeli kupat cholim (health clinic).  The truth is, I agree about the medication, don’t want to think about surgery, and would rather not shlep around having insoles fitted (and paying for them).

I still don’t want to wear shoes at home.  But, like the joke says, if it hurts when I go like this… maybe I’d better stop going like this.

* I don’t know if it’s really her favourite, but if I had to rank them according to the number of times I’ve heard them from her, this would definitely be Number One.