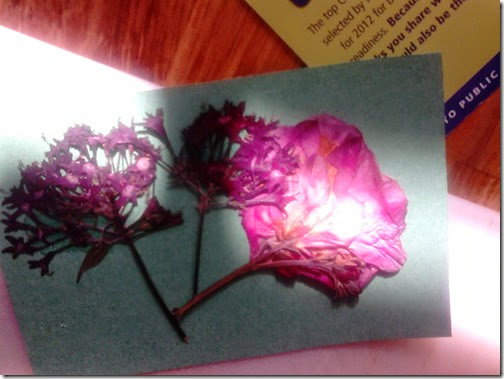 Spoiler alert!  If you are on our “nearest and dearest” list, please don’t scroll down to peek at the craft project revealed below.  It is currently winging its way to you in the mail.  Be patient.

(Um, if you feel you are near and dear and considerable time has passed and you have NOT received your very own Craft in the mail – well, oops.  We still love you, but are far from having our act together over here on this new side of the Atlantic.  Better luck to all of us next year.)

So my nanny used to get these cards.  Maybe you’ve seen them.  They were all-occasion cards with paintings on the front.  Mediocre paintings of puppies and kittens and clowns and water and boats.  And the only thing that was special about the cards was that on the back, they said they were mouth-painted by people who had no limbs.

Mouth-painted.  That phrase stuck with me, maybe because everybody always told me not to put paintbrushes in my mouth.  Or maybe the image of a limbless guy painting a landscape.

And the thing is, they didn’t have to be GOOD paintings.  Once you knew they were mouth-painted, that was enough.

So that’s how I think about our craft project.  A year ago, we had our legs pulled out from beneath us by our move to Israel.  Sure, we did it deliberately, we planned it in advance, and we’re happy we came.  But a year ago, I was overwhelmed by the thought of finding vegetables, making lasagna, assembling a meal.  Let alone renting an apartment, finding a job, ordering gas balloons, and all the other things that we’ve managed to accomplish in the year we’ve lived here.

We have had such a beautiful summer, homeschooling together.  And I wanted to wrap it up with a nice something that we could send to everybody we love before Rosh Hashanah.

Luckily, I planned ahead of time.  Between Pesach and June, when things were flowering, I took the liberty of stripping lots of flowers and bringing them home to press.  The kids thought I was nuts, but okay.

(They realized it was cool when they saw me opening up a couple of huge dictionaries and plopping the flowers inside.)

Some flowers faded more than others, but whatever… this is all about lessons learned, and not about the end result.

We’re not just doing crafts – we’re doing crafts in Israel.  Everything is hard:  I don’t have my regular glue, scissors, paper, whatever.  No WalMart; how are you supposed to craft without WalMart?

But I knew exactly what I wanted to do with the flowers all along.

A few years ago, Naomi Rivka designed a bookmark that I knew was never going to win the public library bookmark contest.  But I thought it was beautiful, so I printed off colour copies, mounted them on cardboard and “laminated” them and gave them out to a few lucky relatives.

That’s what I wanted to do with the flowers.  Only without cardboard, without my regular glue, with weird Israeli laminating plastic… well.  It’s about the process, not the product… right? 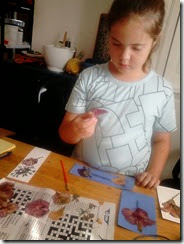 These are a few of mine: Some of the flowers were a little bug-eaten.  Oops… note to self:  make sure flowers are free of insects BEFORE pressing them inside the books!!!

Still, no biggie.  With a few trims of an X-acto knife. the missing part of the flower looks almost like it was done that way on purpose. 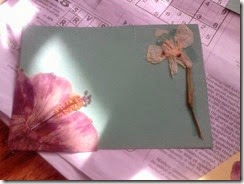 More arranging of flowers, before we glued them into place.  With the wrong glue, of course.  The right glue (Aleene’s Original Tacky) doesn’t exist here. 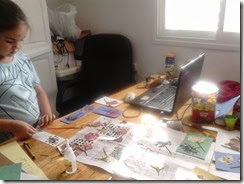 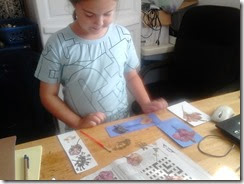 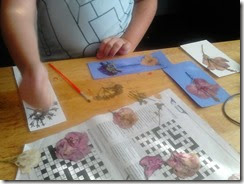 Even though I’d originally wanted a “handmade” look, I decided that if these were going to be our main Rosh Hashanah offering, they ought to have something a little more slick.  So we used up some precious printer ink (brought with us; I have no idea where to buy it here) generating these “stickers”: 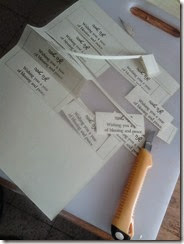 Did I take a picture of the cards with the greeting stickers on them?  No, I did not.

Did I take a picture of the finished product, when it was finally all shiny and laminated (and several beribboned, before I ran out of energy)?  Again, I did not.

Did I take a picture of Naomi Rivka practicing her handwriting as she addressed the envelopes?  Again, I did not.

This is Maslow and his hierarchy, people.  There is still no room, no time, no headspace to breathe.  Let alone think about blogging our adventures, most days.

But finally, bumbling along in our mouthpainting way… we arrived at the stamping stage.

Oy, the stamps.  Our post office decided to give me little teeny stamps instead of the one big stamp for Canada that we have used until now.  Theoretically, we’re saving money, since the big stamp is ₪3.90, and it only costs ₪3.80 to mail a letter to Canada.  (When I complained to the post-office guy that we needed stamps to put on postcards, and using five stamps would fill up the entire postcard, he said to write “Hi,” very small in one corner.)

I did manage to use up some ₪0.85 Israel stamps my mother gave me when we were in Toronto, so that was good. 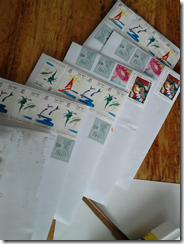 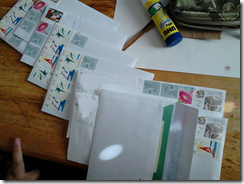 … And at last, everything’s ready to go to the mailbox! 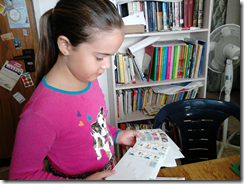 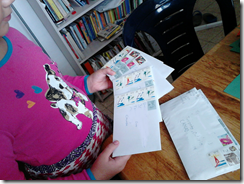 Naomi Rivka mailed them herself.  (Did I take a picture of it?  Nope.)  But away she went, and now they’re on their way, jetting off across the ocean.  I hope whoever gets them recognizes the love, the effort and not, perhaps, the rough edges and wrinkly pale flowers.

We even had time to wrap up some gifts for Ted’s birthday.  A year ago, I could barely muster the whatever-it-takes to bake a marble cake in his honour.  Indeed, I was only spurred to do so by the extravagant price of marble cake mix in our local grocery store (₪25-ish, about $7 or $8).

This Shabbos, it will be his birthday again.  We have come so far… but we are still mouth-painting.

And tomorrow, I have a marble cake to bake.