If you’re a longtime reader of this blog, they’re not EXACTLY new… but they are “nu?” in the sense of “Nu???  We knew these were great poems and we are thrilled that you had art done and are releasing these as books!!!” 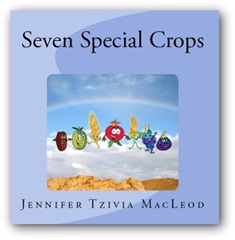 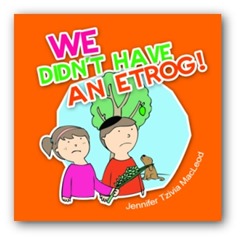 Although these poems exist on the hard drive and were originally written for this blog, they are far from ready for prime time.  Every time I open something up with the intention of putting it together in book form, I shudder and wonder how I could have put it out there in the first place, even just on a blog.  Believe me, there’s a significant amount of re-writing involved in putting any of these together.  Rewriting and frustration and head-scratching and making everything absolutely perfect.

Here are some page previews.

First, We Didn’t Have An Etrog!, a long, awkward title for a book about two kids waiting for their esrog to ripen.  I know, I know… I CALL it an esrog in real life, but after flipping and flopping I went with Sephardic pronunciations.  By the way, for everyone who will ultimately criticize the book for its halachic inaccuracy, I do know that a green esrog is permissible.  But not one that is completely unripe.  I have made the esrog a lurid green colour so it’s clear that it’s very unready.  :-)  Here’s the description of the book:  “What?  No etrog??  What will we do?  It's just not Sukkot without a lulav AND etrog!  These children have worked hard to grow their etrog... but even hard work isn't enough without a bit of patience and some help from Hashem!"  A lot of exclamation marks, and I know what great proofers you all are.  Oh, well.

Then, there’s Seven Special Crops Gifts (way better title!):  “Come meet the Seven Species!  These five special fruits and two grains, the Shivat Haminim, are listed in the Torah in the book of Devarim (Deuteronomy):  "It is a land of wheat and barley, grapevine and fig and pomegranate, a land of olive oil and date honey."  Now, these seven special crops come to life, with rhyme and full-colour illustrations, revealing the true plan behind Israel's delicious bounty!”

Update:  actual previews from the hard-copy proof that arrived today – what a thrill!!!  (Excuse my awful fingernails… I put on nail polish for YM’s graduation, then realized that the main reason I don’t use nail polish is probably that I can’t stand the smell of nail polish remover.  I’d rather have ratty nails for a month than toxify my world that way…) 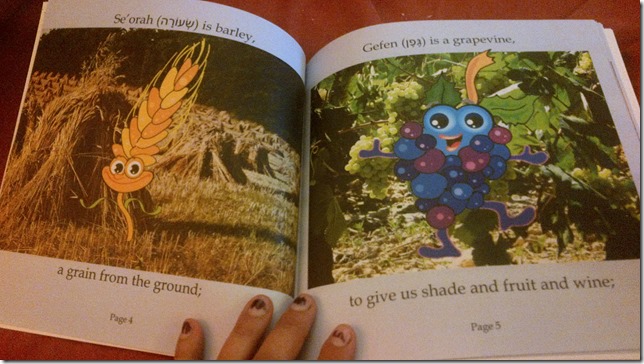 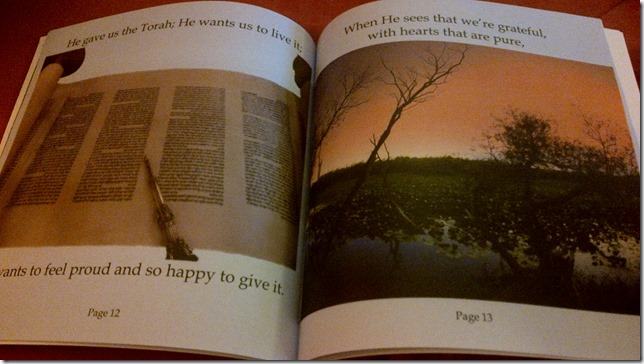 I have tried to make both these books as visually rich and interesting as possible, and I’m just waiting for proof copies to make sure that they look as cheerful in real life as they do on the digital proof copies.  Once I approve the proofs, we’re open for business!

(Here’s why I link to the CreateSpace store even though it’s not as good an interface as Amazon:  CreateSpace – which is owned by Amazon – messes up its authors by paying them a much smaller royalty if readers buy their books on Amazon.  Amazon has the Look Inside feature and the author’s name is clickable and it’s a fun buying experience and they sometimes offer a few pennies off the price of the book… but the royalty to the author is WAY less.  So if I post links, it will usually be to the CreateSpace store, and that’s why, and I hope you will understand and maybe buy from the CreateSpace store anyway. :-)  )

By the way, if it seems like I am doing more with getting these books out there than I have, that’s because I resolved at my birthday that this would be the year of “getting on with things.”  By which I mean, getting my writing up and out and not letting it languish on the hard drive any longer.

Which is what I’m doing… and it actually feels kind of good – thank you very much!