Narrations That Blew Me Away: Beshalach

First Gavriel Zev’s.  We seem to have arrived at a happy place where he will dictate while I type.  At the end, I made a game of it, so when he said “Now, print it out,” I typed “Now, print it out.”  And then, when he said, “Erase that,” I typed, “Erase that.”  After much giggling and fooling around and erasing, I printed it out.  He cut it, pasted it onto the blank page, then did the rest by hand.

What blew me away is the fact that it wasn’t crumpled.  When he undertakes an art or craft project, there’s about a 75% chance that it will not meet his bizarrely high standards (apparently, nobody has told this kid he’s only 5!) and he gets frustrated and rips and/or crumples it.  I have begun a campaign to encourage him to a) work in pencil, b) cross things out if they come out wrong, and c) live with mistakes, because we all make them.  All with mixed results so far – perhaps the crumpling ratio is down to around 60%?

Anyway, he was pleased enough with this one that he let it stand.  So I was impressed.  Hurrah! 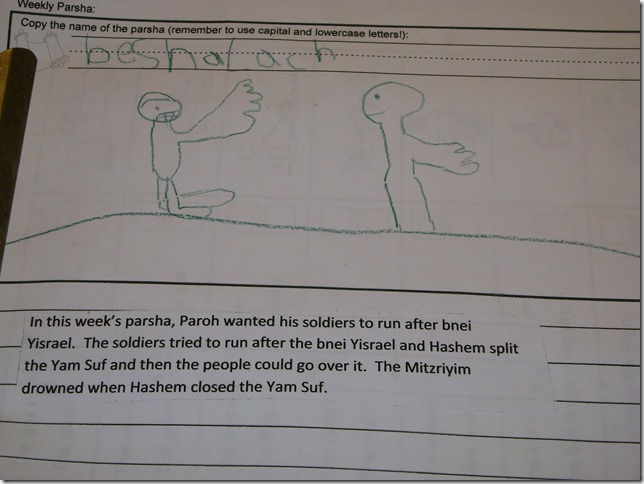 Naomi Rivka’s, however, blew me away for another reason.  Sick of watching me handwrite her narrations, she said, “just give me the paper – I want to do it in your bedroom.”  So I handed over the paper and clipboard and my pen (a special treat for parsha pictures; normally she does everything in pencil) and off she went.  By the time she came back, it was nearly Shabbos, I was busy with other things, and didn’t have a chance to look.

So I really was genuinely blown away at the Shabbos table to pick up THIS: 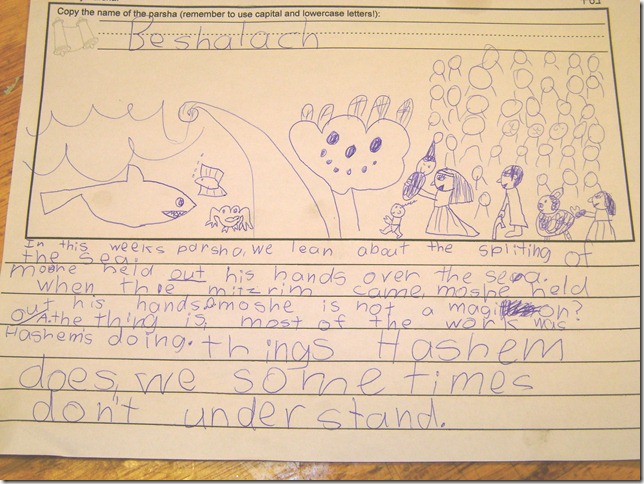 It was a nice Shabbos.  With both big kids up in Thornhill (different places), my mother called to say she “might not” come for dinner because she wasn’t feeling well.  Now, when that happens, it almost always means she won’t come… so there I was, facing the prospect of being home alone for Shabbos dinner with my husband and only 2 of our children.  Almost unprecedented – I think we’ve had ONE Shabbos meal alone with the littles, maybe?

Anyway, my mother rallied and did come for supper… but then we were alone for lunch.  It was a quiet meal because I’d forgotten where I put the printout of Tu b’Shvat songs.  Doh!

Oh…. just realized.  I wonder if the happy-face tree in the centre of Naomi Rivka’s picture is some sort of nod to Tu b’Shvat???

Definitely wishing I was in Israel for it, but we got to enjoy my mother’s reminiscences and the thought that next year, we will be…