But I can’t stand the “genericization” of this whole bloody month, as you’ll know if you’ve been reading here for more than about ten minutes (sorry to any long-term readers who’ve heard it all before!).

Look, it’s Chanukah right now.  I know that, and I guess – reluctantly – I like it.  And next week, it will be over, and I would ask that you pretty please not continue to acknowledge it or celebrate it in any way until next year at this time.  But no… and it’s particularly poignant in years like this one, where, because of the way the calendars line up, schools and the community around us will continue to “celebrate” Chanukah on our behalf at least until December 25th, if not right on through the entire month.

And here’s how they do it:

Yay!  A funny animated wintertime snowman, holding a wreath, pulling out a red-and-green wrapped gift, with a cozily-lit home in the background presumably illuminated by the fir-tree within.  Yup, looks just like our house ‘round about December 20th… oh, no, wait – it doesn’t.  Just slapping the word “holiday” on instead of “Christmas” doesn’t make these activities any more kosher than slapping a hechsher on a bag of pork sausage would.

It’s very lovely to hunt for commonalities among the festivals, like this image does:

Yes, it’s true.  We all gather with family, light lights and have food.  Hurrah!  And some of us celebrate the birth of the messiah!  And some of us rejoice in our victory over assimilation (hmm -  a message for the season in there somewhere?) and a miracle from Hashem that lasted eight nights!  While some of us… well, I’m sure there are things Kwanzaa stands for, too, and if the people whose cultures that festival celebrates are happy then I guess I’m happy (though frankly, I don’t see it as equal in status to either of the above).

And then, there’s this frequent attempt to suck the student into the spirit of the festival by having them pick a side - “My Family Celebrates”: 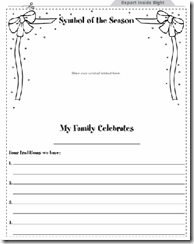 What if they don’t celebrate Xmas or Kwanzaaaaa or Chanukah or Posadas…?  What if they celebrate Eid or Diwali or the Guru Gobind Singh's Birthday?  The truth is, I grew up in a half-Catholic, half-Greek school where the Greek half were off celebrating the “wrong” Christmas every single year.  They didn’t have a December holiday at all (Greek Christmas is “on or near” January 7th, as they patiently explained to ignorant teachers every single year).

Oh, and don’t get me started on people who answer (and I’ve heard this many times – sighing deep within every single time), “well, at least everybody celebrates New Year’s!”  No.  No, we don’t.

I’m not afraid to call this what it is:  Christians who love their holiday, genuinely nice people – sometimes super-nice people – who who are excited about their festival but don’t want anybody to have their feelings hurt.  Perhaps they’ve had their hands slapped for trying to share their wonderful holiday once too often in public schools.  That’s a shame; I believe their holiday can be shared in public schools in the same way that Jewish parents are often invited to share their holiday – you come in, you give a talk about why you love the holiday, offer a sample of the food, maybe a craft, and that’s it.   In out out – quick and easy.

Here’s how you don’t do it:  you don’t move your holiday into the school full-time for a month and a half beforehand, even if a majority of the students celebrate it.  You don’t teach the songs and mythology, offer non-stop Xmas crafts and decor, and then attempt to palliate the situation with an inauthentic nod to one or two other cultures.

The term “December celebrations” reminds me of the watering-down of History and Geography curriculum under the auspices of the bold new meta-header of Social Studies.  In many cases, “social studies” is a watering-down and politically correct version of what used to be known as history and geography, except it’s a whole lot more centred around the kid and his/her experience of everyday life.  And a whole lot less centred around events that actually have any real significance.  For instance, learning about police, fire fighters and local grocery stores in the early grades instead of about Cheops, Magellan and the Mauryan Empire of India (guess what we read about today?!).

Here is the watered-down synopsis of Chanukah from one of these websites, courtesy of a major educational publisher:

Notice what’s missing?  Who’s missing?  Hint:  Hashem and the Jewish people.  Beginning with “the taking back of the Temple,” there’s a heck of a lot of passive voice.  Who took back the Temple?  “When the Temple was destroyed” – um, nope.  Ditto for “the lamp of the Eternal Light, which symbolized the continuation of the Jewish people” – not exactly.  And then, ‘because of a "miracle,"’ – love the PC bet-hedging behind those quotes!  And then they had enough time for “the temple to be rededicated” – to what??  Well, I could go on and on.

In the homeschool world, without the tempering and pandering and reflex political correctness of the public-school mindset, I am inundated with Christmas on every side.  Absolutely deluged with emails offering printouts, handouts, audiobooks – many freebies, all kinds of stuff people like me totally love, and it’s ALL about Christmas.  I don’t think I’ve gotten a single email asking me to rejoice over the holiday season… well, maybe one or two.  Mostly, they want me to rejoice because Jesus is born and wow isn’t it great, and the light of the world, and frankly, though I don’t share that belief at all, I am happy that the people around me in the world are happy.

All of which means I’m free to ignore the Christmas season, because it’s not my season.  If you’re Christian, that’s fabulous, but trying to engage me in a mythical “holiday season” concocted for public-school, public-arena palatability annoys me far more than just blatantly celebrating your own festival in your own way.  If you’re Jewish, well, go light Chanukah candles.  It may not be a holiday season, but it is a holiday and you’d sure as heck better enjoy it!