Chanukah presents for my sisters, as modelled by Ted (and yes, I’m Canadian, so 2 L’s really IS the correct spelling!):

1) Shark mitts for Sara.  These were going to be elephants, hence the grey, but then I remembered that she’s kind of sick of elephants.  Like if somebody figures out that you like orchids, say, or salt-and-pepper shakers, then they’re going to get you nothing but orchids or salt-and-pepper shakers for the rest of your life.  She’s probably not really sick of elephants, but I figured a new animal would be a nice change of scenery.  So… what else is grey?  After pondering sheep for a while and yawning tremendously at the idea of sheep mittens (cute, but blah), I realized that sharks were the very thing.  There was also a matching grey hat, but I don’t seem to have gotten a picture; it’s exactly the same as the one I made for Abigail in the picture below.  Oh, and I slipped a little elephant into one of the mitts – a quick project (Percy the Elephant Amigurumi pattern here) that I literally finished during one 2-hour preschool class of Gavriel Zev’s, while helping Naomi with her schoolwork. 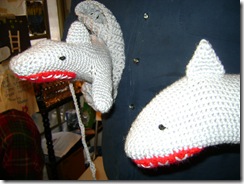 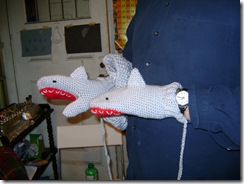 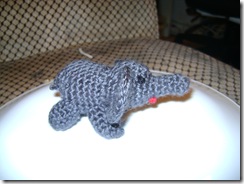 Oooh, I found a picture of her showing off the mitts AND hat!  Rare pictures; Sara notoriously hates hats.  One of the big kids reminded me of a heartbreaking story of spending his/her last few pennies to buy a (pretty cheap at the dollar store) hat-and-scarf set for Sara, who notoriously cast them aside.  I dunno if they were really cast aside.  For all I know, she wore them often, but in the big kid’s imagination, the gift was underappreciated, and I was warned that this one might be, too.  I told her if she doesn’t want the hat, she can give it to our mother, who seems to have infinite room for hats in  her wardrobe, and wears a lot of grey.  (these hats also turned out fairly big, which is probably good because they won’t skwunch – squnch? squunch? – anybody’s hair) 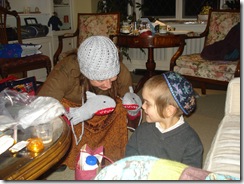 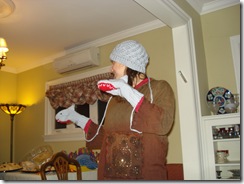 2) Croc mitts for Abigail!  I actually chose this green first because Abigail has a winter coat in a similar colour and it just seemed like her.  I suppose it could have suited either sister, but it struck me as hers first.  And green, of course, is a crocodile.  Or alligator.  Or something vaguely lizardy or reptilian, with silly googly eyes and a kinda-fangy overbite. 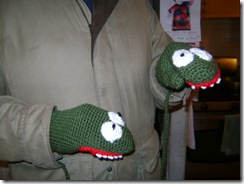 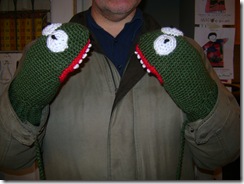 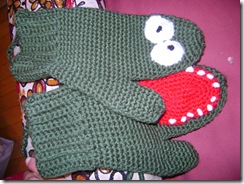 You can see Sara’s hat in the left of the background while Abigail reacts in delighted amazement to her bitey mitts.  And then there’s  her matchy hat, which has absolutely nothing shark- or croc-themed about it… it’s just (in my opinion) a nice simple hat that doesn’t look too “crotchet-y” (in t he pattern, it’s called “Divine Hat” (pattern here) which may be slightly overstating its wonderfulness, but it sure is quick & easy). 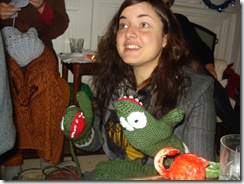 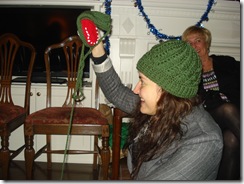 I did make the mittens myself from scratch, adding character with a few touches here and there (Mrs Murdock’s Mittens pattern here, shark fin here but I only did up to Row 6, teeth inspiration here, basic red oval instructions here).  It occurred to me as I was adding the last couple of features that I probably could have bought Dollarama mitts and spiced them up very quickly with homemade bits and bobs.  But I suppose that totally defeats the purpose, and this really is an easy, comfy mitten pattern.

Continuing the theme of gifting only the adults in my life, I gave Ted this hat I made for him a while back.  Not sure I love the main “camel” colour – I think his skin is so pale that he needs something a little darker.  But anyway, I’m very pleased with the beard I made – for no particular reason – to go along with the hat.  Kind of along the theme of “keeping warm in winter.”  And also “moving to Israel and fitting in in Meah Shearim.” 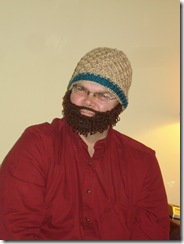 So there it is.  Crochet stuff… I’ve been busy!  Do you give homemade gifts, or storebought stuff?  Or no gifts at all…. (our kids get money; cold, hard cash!)