When I say easy, I mean easy; domestic goddess, I am not these days.  Not even up to my usual, slovenly, standards.

But anyway – pumpkin.  I bought four biggish ones on November 1st for 99 cents each (up from 49 cents last year, and FREE the year before!), plus I found one BIG one this evening walking to my mother’s house (sitting at the curb, but it only had a couple of squirrel-bites out of it… and I figure the roasting takes care of any squirrelish germs; I hope I’m right!).

So here’s what you do:

OH – final tip:  THE BAGGIES LEAK!  Especially cheap ones; all we had for these pictures were the expensive kind Ted’s family gives us.  Always thaw frozen baggies of pumpkin in a bowl in case of leakage.  This sometimes works in my favour, as the watery stuff runs out, leaving slightly denser, dryer pumpkin purée. 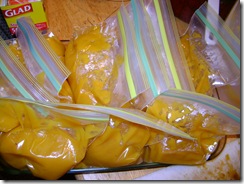 Here’s an old post with a few more pictures, in case you’re utterly captivated at the thought of more quivering pumpkin goo.

How do you use canned / frozen pumpkin???