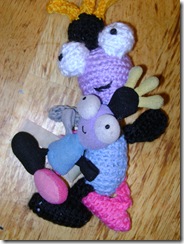 So Gavriel Zev has this little friend named Frankie that he’s been running around with for over a year now.  He adores Frankie, who is a goofy little alien guy with big bug eyes and three wibbly things sticking off his head.  He was part of a set of baby links which have long vanished, and a few months ago, GZ removed the huge plastic links from Frankie’s hands, so now he’s just a regular doll.  Here’s a picture of a brand-new Frankie with some of the linkie things he came with when brand-spanking new.

With his ever-cheerful (but not too cheerful) expression and perpetual willingness to get into and out of bizarre scrapes and difficulties, Frankie has become part of GZ’s hardcore group of “friends” (including Spot and a couple of monkeys) with whom he plays constantly – they have unbelievable adventures together.  You can see that these adventures have “aged” him significantly, but because he’s made of some type of polyester thing,  he’ll probably outlive us all.

While he was playing, GZ he mentioned today that Frankie has no parents (because he’s an adult), which gave me an idea… and since we are celebrating Gavriel Zev’s birthday one of these days (maybe today), I quickly whipped this guy up right after Shabbos… 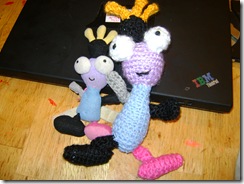 I even added a few metal links just in CASE the two Frankies want to literally “hang out” together: 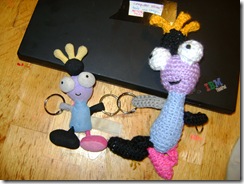 The crochet one doesn’t HAVE to be a parent for Frankie, but it can be.  Or just a buddy.  Just so he has some family on this earth; someone a bit like himself.

The yarn is from all over the place, just scraps I had sitting around; some cotton, some acrylic.  I’m a little unhappy with the body not because of the shape but because it’s crocheted in cotton and it’s pretty gappy-looking, especially in the back where you can see the tangle of loose ends I stuffed in there.  And the left foot of my Frankie is hanging at a pretty weird angle.  But overall, I’m very, very happy with the way he turned out.

AND – of course – with the idea of a zero-cost (except my own exhaustion) birthday present that doesn’t represent any type of over-commercialized Disney / Pixar thing makes me very smuggishly pleased with myself indeed.